Have been a bit lacy to write of every trip I have made,there has not been much to write about,small buggers ETC.ETC...
Last trip was funny in one way,I had fished for an hour without any hits and it was time to finish and go home but somehow I decided to do one more cast and BANG,a small one with my last cast.
Okay but about today´s session,went out with my brother for a couple of hours to fish,not to test.

I don´t know why but I had a feeling that this could be a good day,air temp 15 degrees,wind blowing from southwest 3-5 m/s and a cloudy sky.
The water temp had cooled down but was still warm in my opinion but it was the only issue so far. 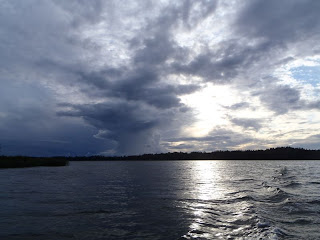 We went to a bay witch we have named to Eldorado Because it´s almost impossible to make a blank draw there.
We fished for a while,my brother with lures and I used flies.
My brother landed his fifth or sixth before I had my first fish landed,all of them was from 1 to 2.5 kg:s.
We fished and enjoyed the landscape when a train suddenly attacked my fly.The place was almost identical with the one were I dropped the big mama last trip.
This time I was prepared and didn´t gave too much pressure immediately,it would have been no use,the fish ordered both speed and the direction....For a while,when she decided to show herself for the second time at the surface I knew that I would be the winner of this battle and let her make a couple of runs before It was time to land her.
I got her in the boat for documentation but I noticed that I didn´t have my tape measure with me,well,I put her in my weighing bag and my scale showed me a weight of 8,2 kg:s,put my rod next to her and took the length of that beauty by marking it on my rod.
After a photo it was time to let this beautiful beast go back to her own home and at this stage I saw there was blood all over the boat,looked at my hands and I saw a big cut on my right hand and a second after that I saw some bleeding scratches on my left hand too but who cares.
Fished a while after that but again my mind was somewhere else so we both decided to go home but at least I will be back soon.Here she is: 116cm:s/8.2 kg:s 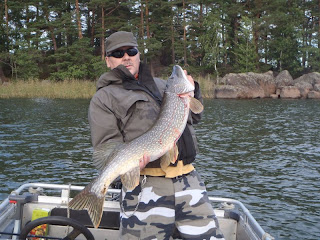 And here`s a photo of her goin´g back where she belong.Hopefully I´ll meet her once again after...let´s say 2 kilos more :) 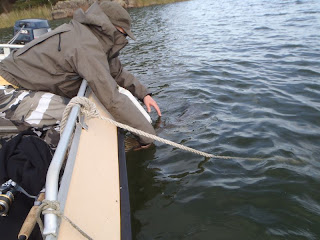