Have noticed for a while that if I go out after work mentally meant to "just lay out some line" I have had much better fishing then on a 12-14 hours of raw fishing,so even last Saturday.
Went out early with a friend of mine in cold but otherwise nice weather,sun was shining,a light breeze from west which nicely broke the calm surface.
Only issue was a very low water level which so often have made fishing very slow.
We had some clear plans were to fish so we paddled through some spots without fishing them at this moment.
My friend landed a small jack after maybe an hours fishing.A third friend joined us just at same time I landed my first fish of the day.
There's not much more to tell you about.I landed one more fish,had my line broken (FUCK!!!)
Think we fished for 13-14 hours and less then 10 fishes for three anglers wasn't exactly what I was waiting for even if I knew it's going to be a tough day out.

But some positive things here to an end.
Had my first bbq sausages with good company for the year which was the best part of the day. 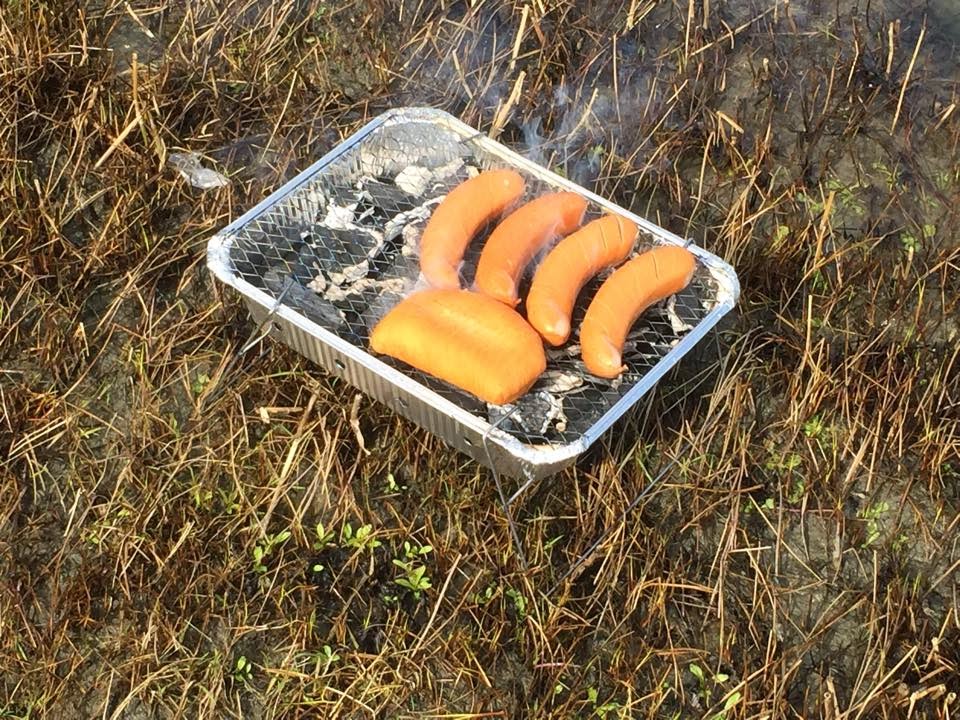 Managed to finally make a video of a way to tie up a Wiggle tail fly in my way,made also a video of a hook-rig to it. 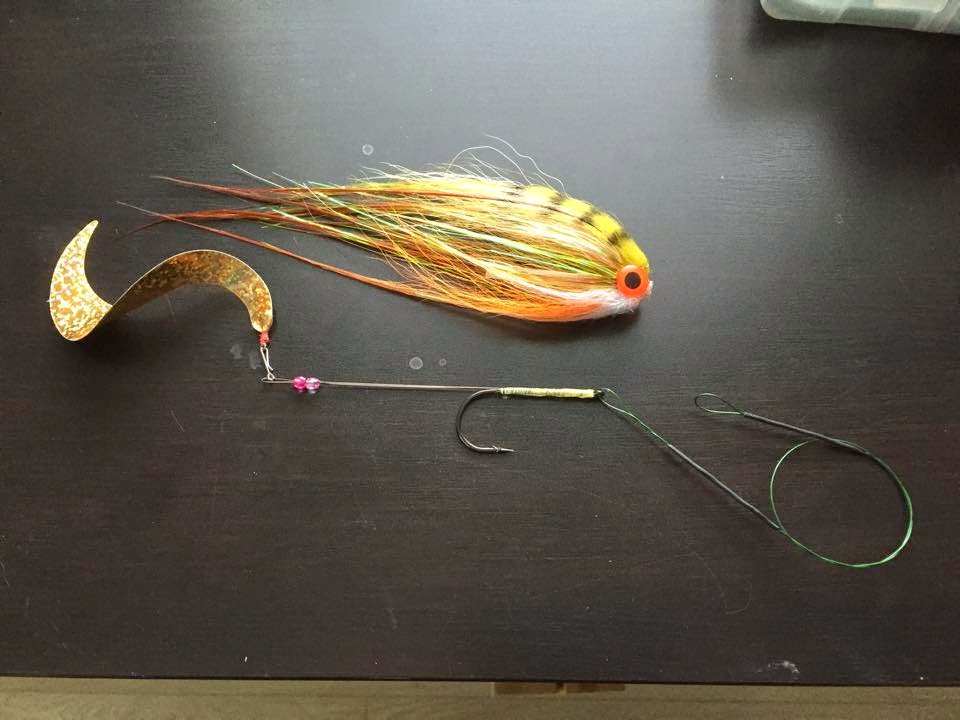 Do not forget to watch Niklaus Bauer video of Wiggle tail flies which will be released  April 30:th 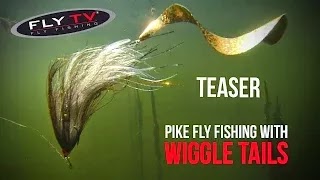 Can hardly wait for this one,these videos use to be super cool.

And one more video to add.
My friend Daniel from  http://www.bluedotmediashop.dk/ will sell some cool stuff for pike fishing
for good money,so hurry up if you wanna get some.


That's all for now folks.
Next weekend I will be fishing with my team-mate from Jackson kayak fishing team in a place that should be awesome,hopefully the weather is good for fishing and that pikes will be more co-operative than last Sat.
Lähettänyt Unknown klo 8.50 1 kommentti:

So,pre-spawning season comes to an end soon and I have to say it has been better than usual which I think it's much Wiggle tail flies to thank.
Have really gave all kind of flies a fair chance but those Wiggle tails have been outstanding,think every single landed fish has been fooled with one.

Have tried to figure it out what's the secret with these tails and think one big thing is that in cold water were at least I use to fish with loooooong stops while retrieving the tail still moving seductively and driving pikes out of their mind.

There's probably many variations of flies used with tails,my solution has been tubeflies with a singlehook rig with a replaceable tail.
I think this solution suit my fishing pretty well because it give me so many opportunities to fish with same fly.
As you can see on the pic below.You can use a tail or just a normal hook rig,wanna go deeper just add one or more coneheads etc,etc.... 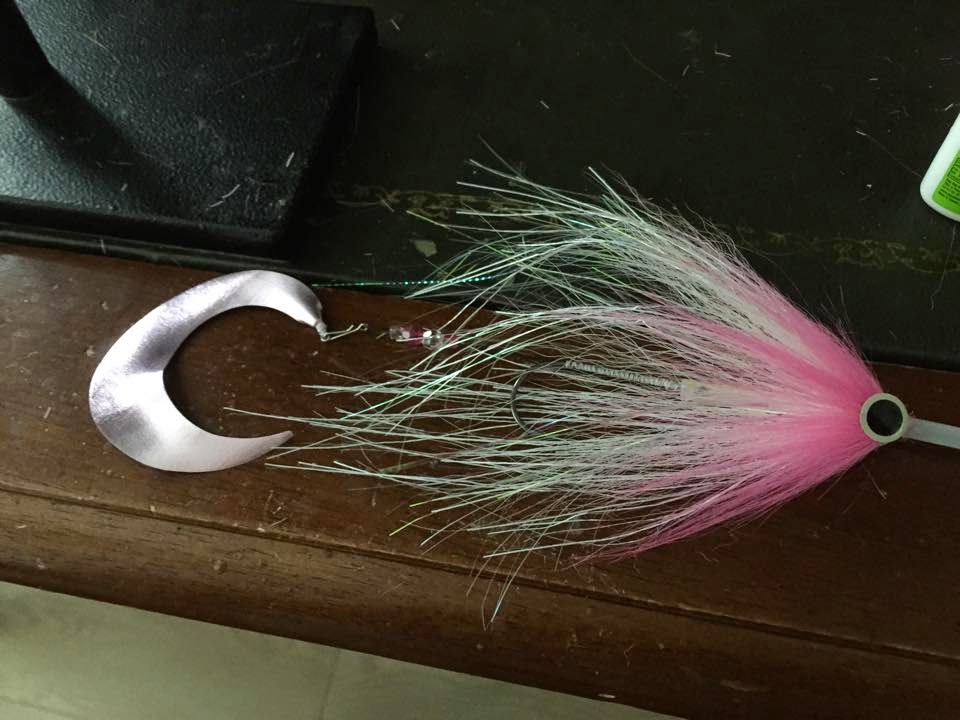 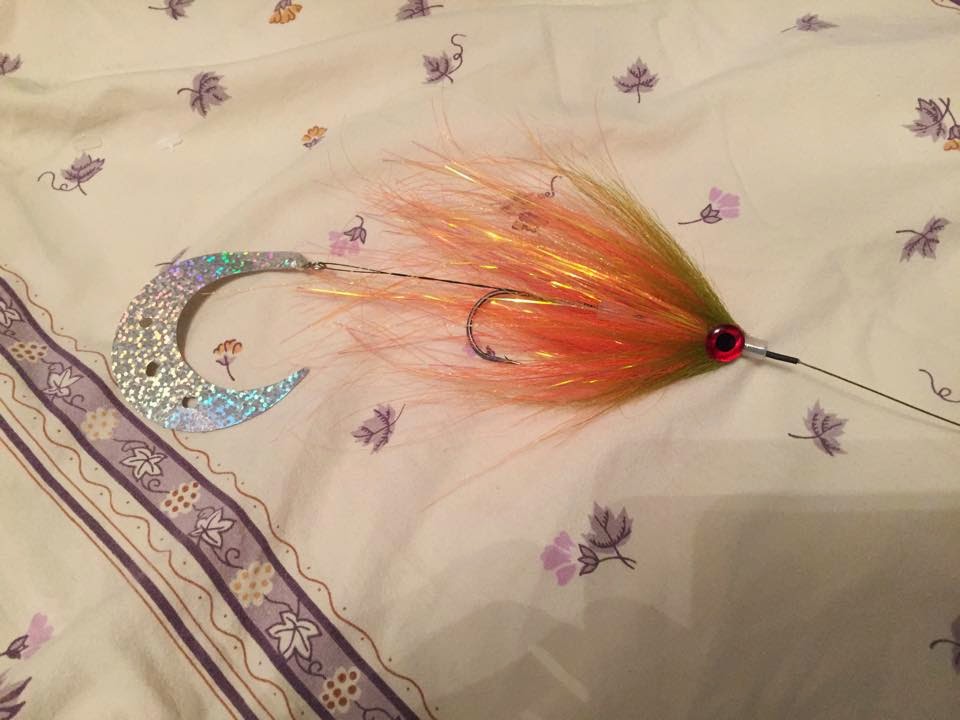 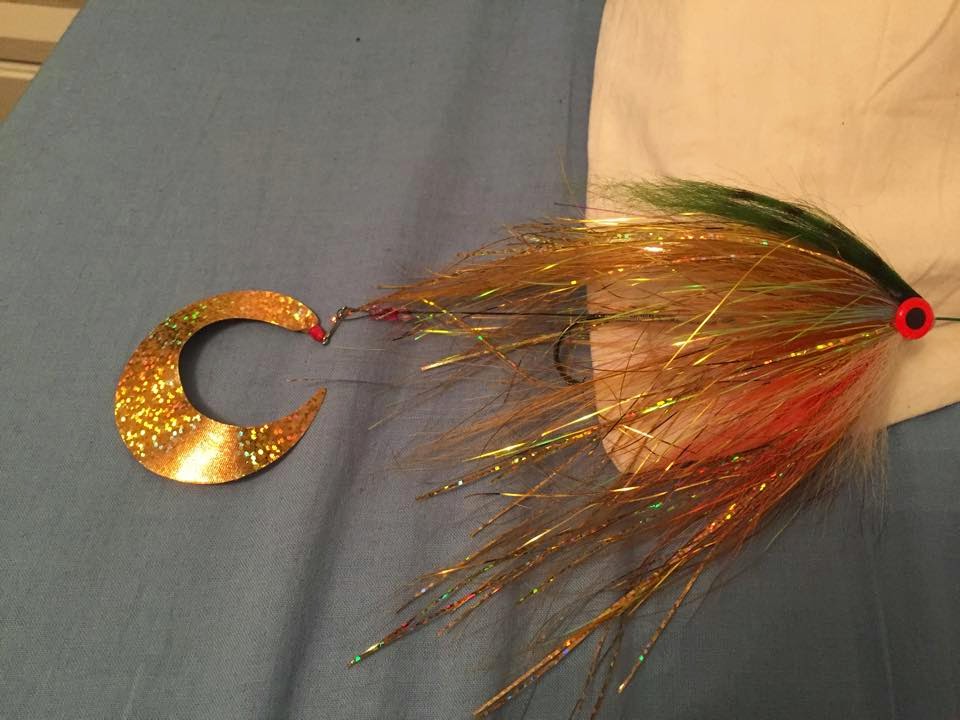 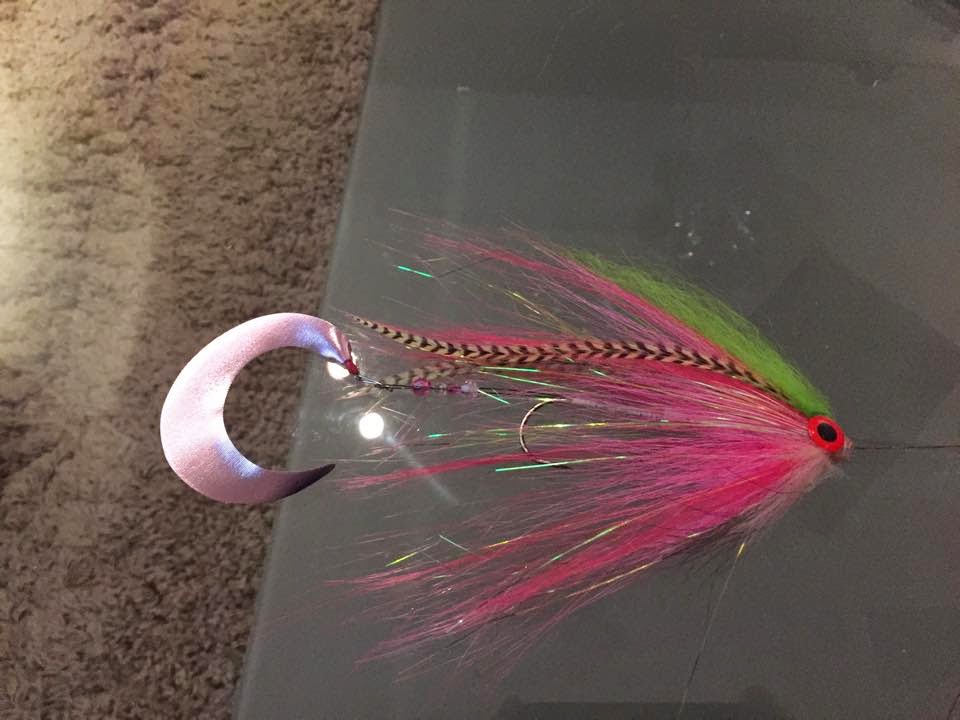 As you can see these flies are very simple to tie,a collar of bucktail,add some synthetics like big fly fibre and flash.Made a head of craft fur,icelandic sheep or nayat hair and that's it,no need for any fancy tying unless you feel for it.
These flies measuring only about 17 cm but with the tail they are close to 25 cm which is big enough at least for my fishing.

Once again I have to remind you that this is only one solution of million different ones.
I'm using a Partridge Universal predator CS-86 hook size 4/0 .
Tying in a 55 lbs titanium wire double on the shank after I have added a small snap lock on it.
After I double it I thread some pearls on the wire for the balance,don't want to have a jigging movement on them.
Also use to put a thin layer of epoxy on the hook shank to protect the tying thread.

Now it's just to tie in a snap lock reverse on the tail,snap it on and the rig is ready.

These are solutions which have worked very well for me but of course I'm trying to improve even things that work well so that's why I'm really waiting for this  https://www.youtube.com/watch?v=TMAVs6tLR58
to see and hopefully get some new ideas and inspiration.
Waiting extra much for the new bigger models to come......

Now at springtime I have not been able to stay away from water for a whole week Because it's so short time before they go spawning so I have even been on the water after work for some well planned attacks on small areas for two-three hours.

Have noticed that a well planned short session is much more effective than a session which last the whole day and fishing little here and there.
It's all because when you got limited time you fish more precise few spots than using your precious time to paddling.
Precise fishing compared to Wiggletail flies has been the key factor for my Springtime so far. 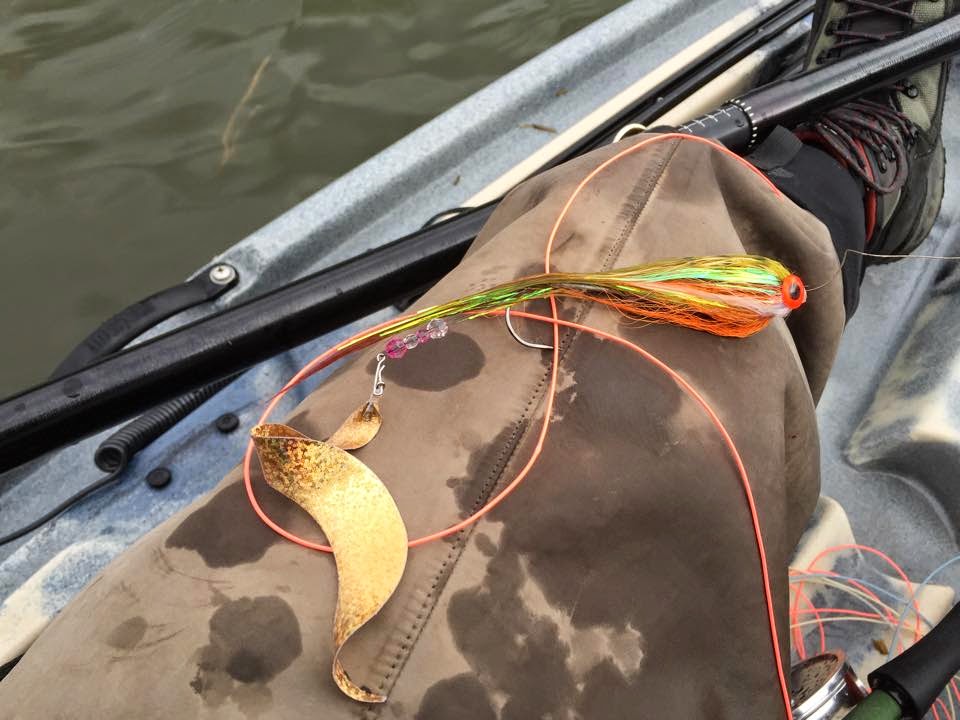 There's not so much to write about these short sessions but made a small video of the one from last Wednesday: 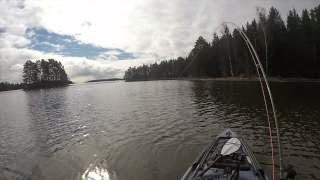 10-12 fishes in an hour and half was cool even if there wasn't any big guns included.

On Friday I had some more time to fish but the wind was very strong and it was cold and rainy,I saw sleet,I saw water and everything possible coming down and had no high hopes.
But still in 3 hours I managed to land 7 fishes of which one was a better one.. 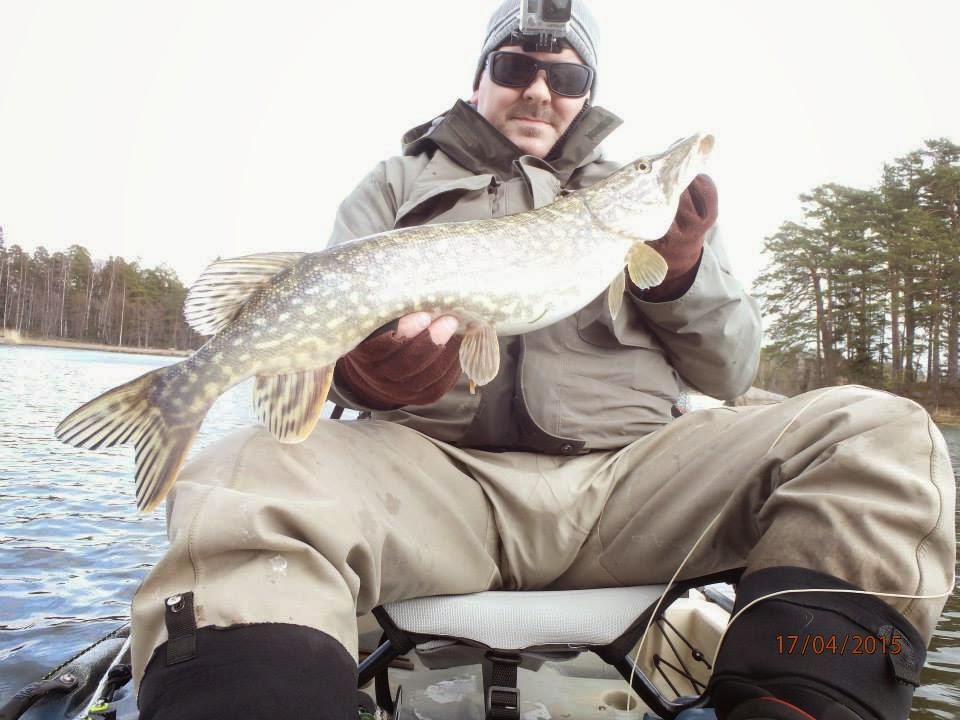 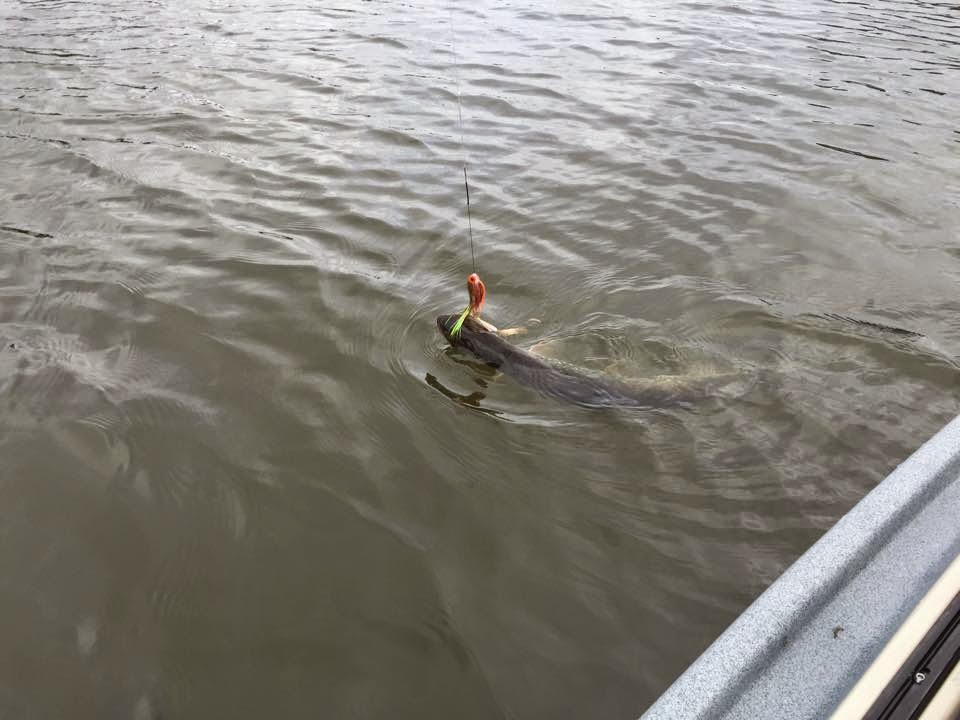 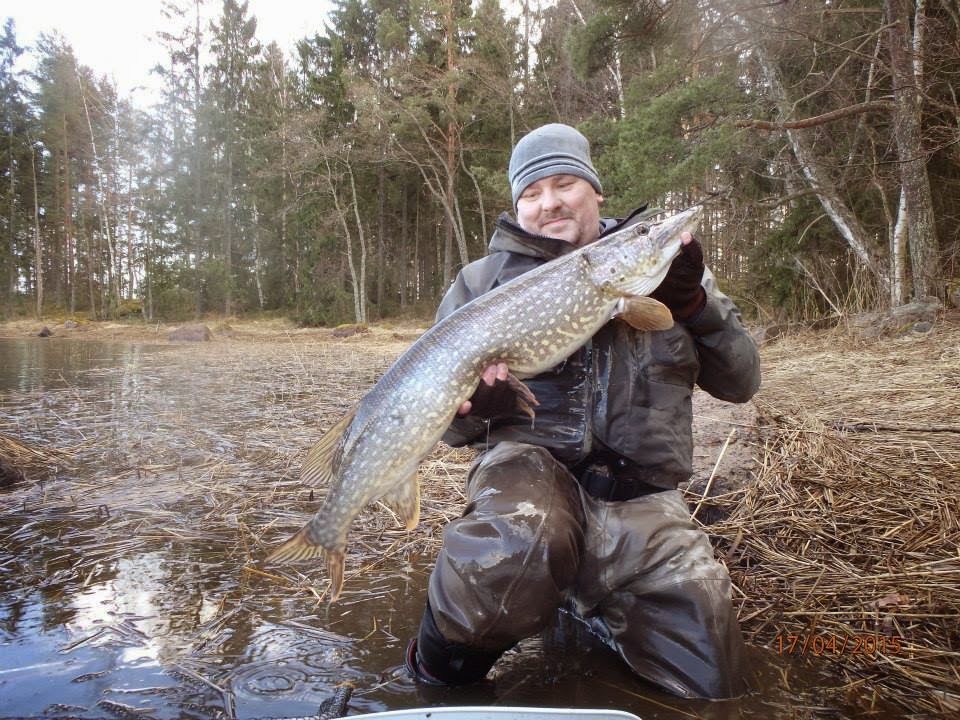 Was out on Sunday too,fished for nine hours and managed to land only five jacks even if weather conditions except water level was perfect.
Maybe should I do only some short precise shots more often.
Lähettänyt Unknown klo 9.12 Ei kommentteja:

Sunday April 5:th will be written in history as my season opener.
Heard on Friday that there was some open water to fish but had some other plans for Saturday so were no able get out on same day but I can tell you it was a long day just waiting for Sunday.
Didn't sleep too much that night and was up early on Sunday morning and after a quick breakfast I met my friends at the shore as we started to gearing up for the day.
It was windy,cold and cloudy day which felt even colder then what it actually was due to the three and a half month long pause I have had since my last trip in late December 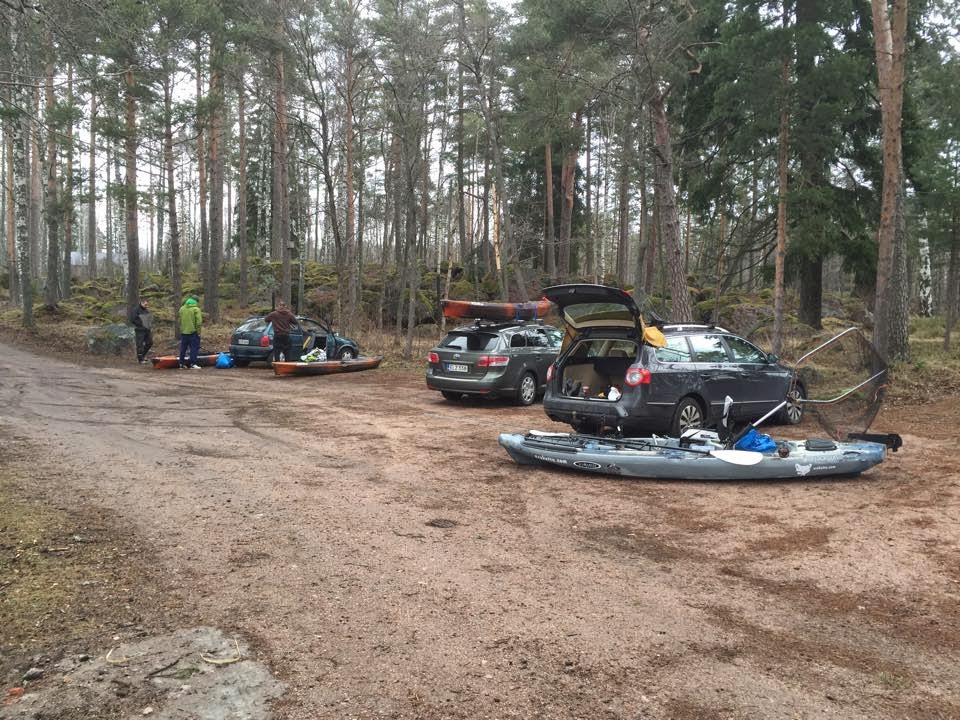 After we had made a game plan we went out on water,hard to describe that feeling when my yak slide into the water,oh man I was happy.
There were still some ice on many of my ordinary spots and also a heavy wind so we had to think a bit outside the box and we found some "allright" places to fish from.
In our first bay there were no ice at all but a pretty tough wind to fight against.
Had all my new flies with me and decided to start with a "Wiggletail",hottest of the hot new stuff.
Fished for a while and no long before I felt some light bite on my fly and yes,first fish of the year landed,Nice.

Fished here for a while but nothing more than a dropped fish for me so we decided to take a short break,we were all hungry already.


Some warm soup and juice taste so good out here and keep the focus on.
Tried some other flies too but with no result.
We decided to paddle a bit further out but kept in mind that we had to paddle against the wind on our way back so we didn't go as far as we had planned.
Dropped two more fishes which one felt like a better one and it was time for another break. 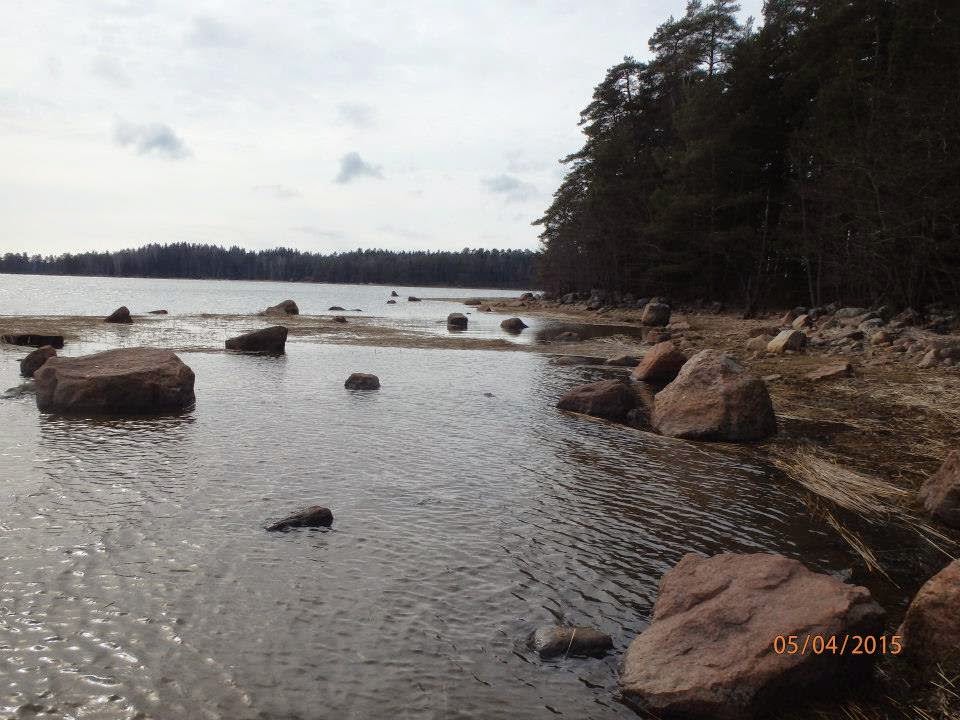 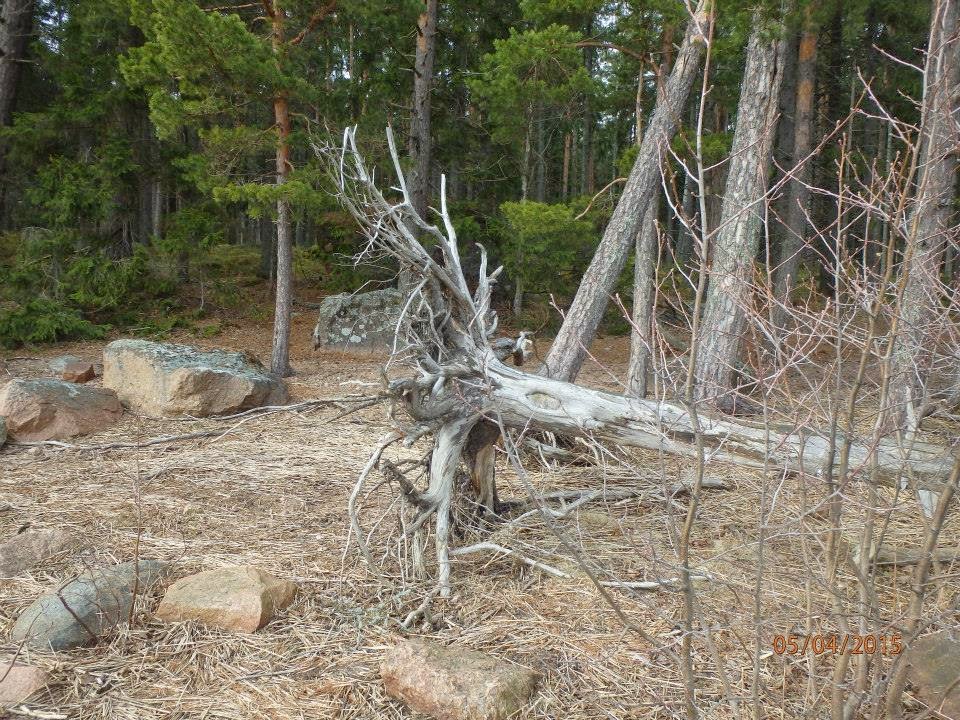 After a break we decided to slowly start to paddle back fishing some spots on our way and it was nice to get to a calm bay and also the sun showed up among the clouds for a while.
Amazing how different conditions can be due to places.Water temps was almost three degrees warmer here than on the other spots.
Dropped two fishes here,one felt like a better one,but not sure.Anyway as soon as I had change back to a wiggletail I had some action. 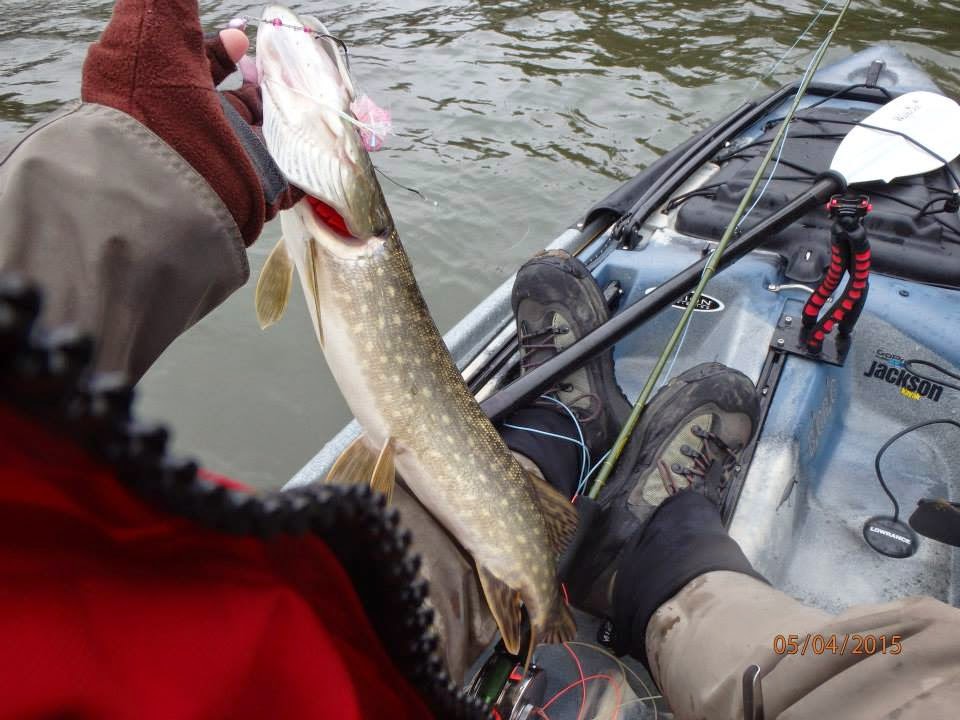 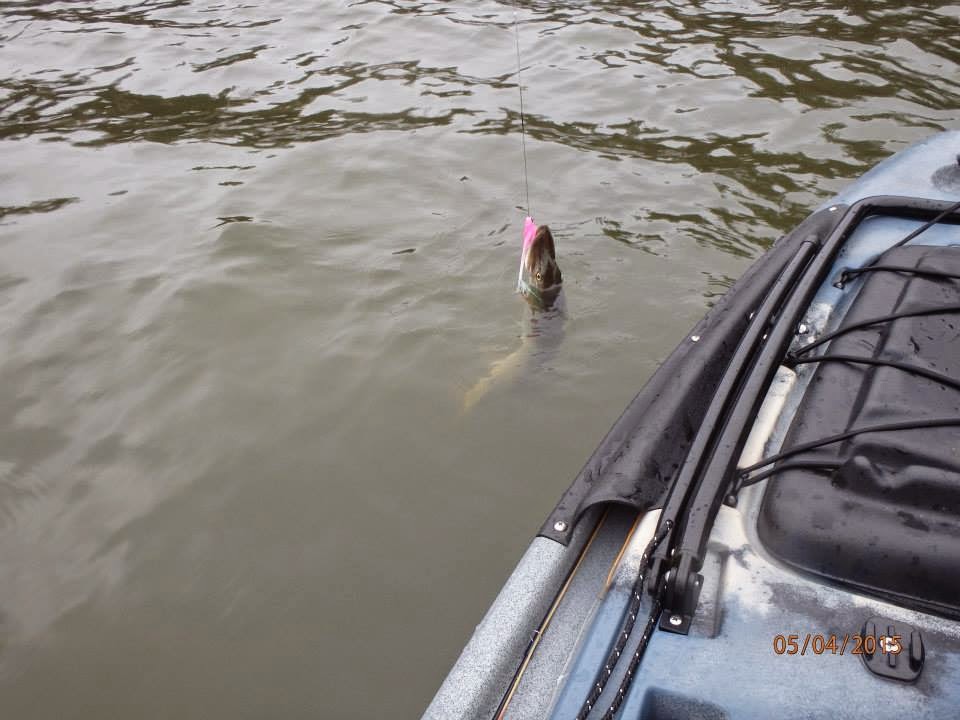 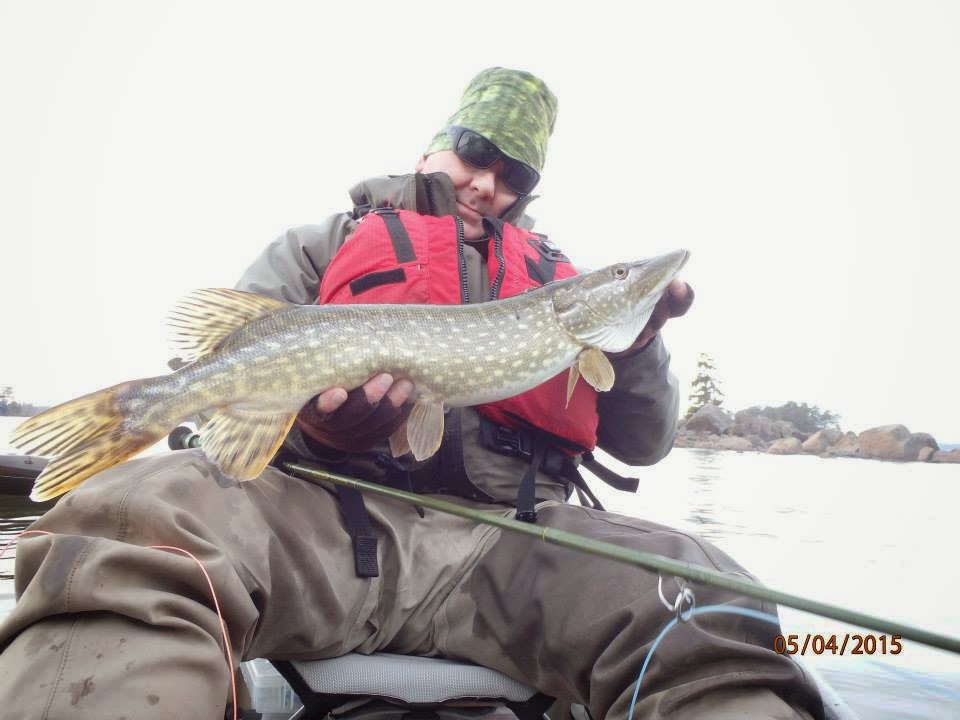 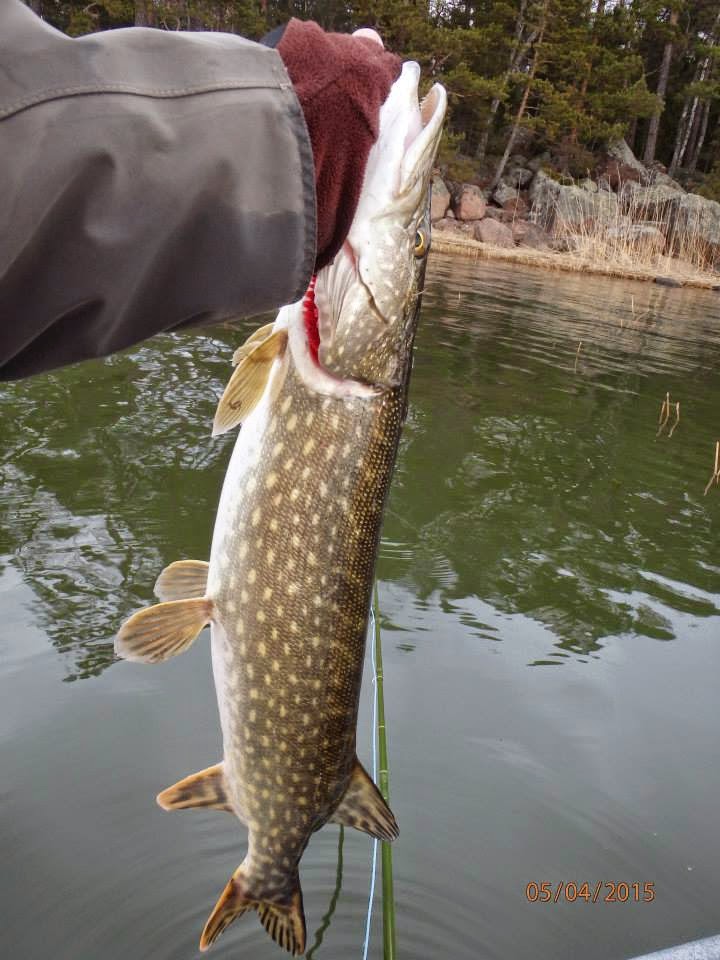 Not much more to tell you about,it was very nice to be able to get out after so long pause.
A remarkable thing  was that wiggletail flies or in this case fly (pink/white) was simply outstanding for me,outstanding even if I gave a fair chance to other type of flies too,had not a single hit on any other fly.
My friends collected their fishes with a "ordinary" flies,Spin fisher blanked....of course =D

Woke up pretty early and noticed that every muscle in my body ached A LOT !!!!
Barely get up from the bed and while drinking coffee I decided,believe me or not to not go fishing today.
After some hours I found myself staring out  of the window,sunshine,no wind.....
15 minutes later I found myself sitting in my car on my way to the shore.
Was down at the shore so late I decided to not paddle far out and took only one box,one rod with me. 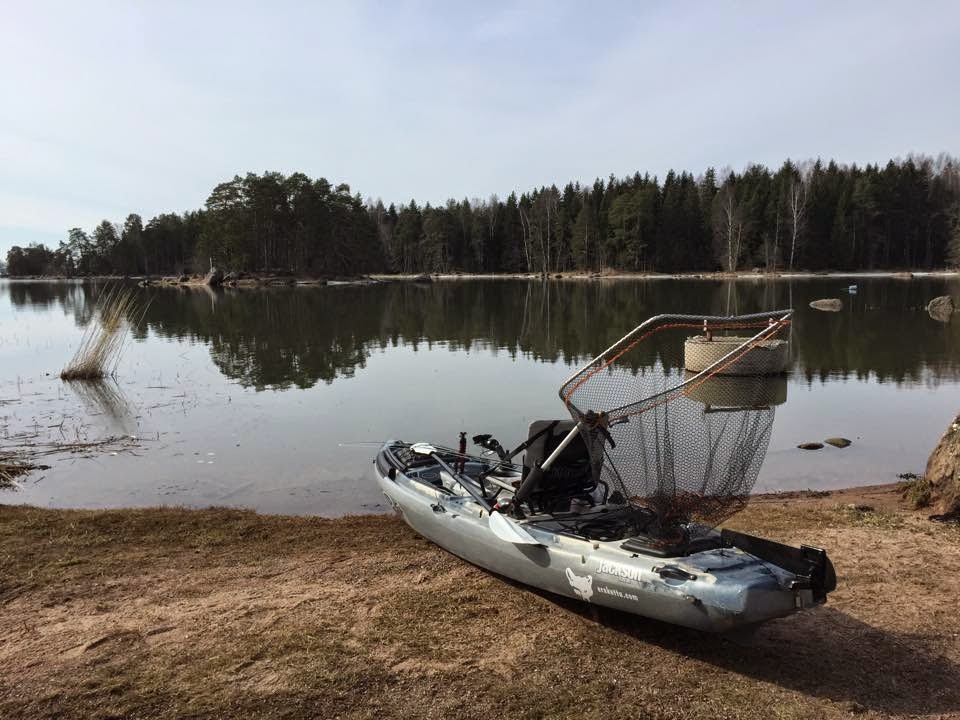 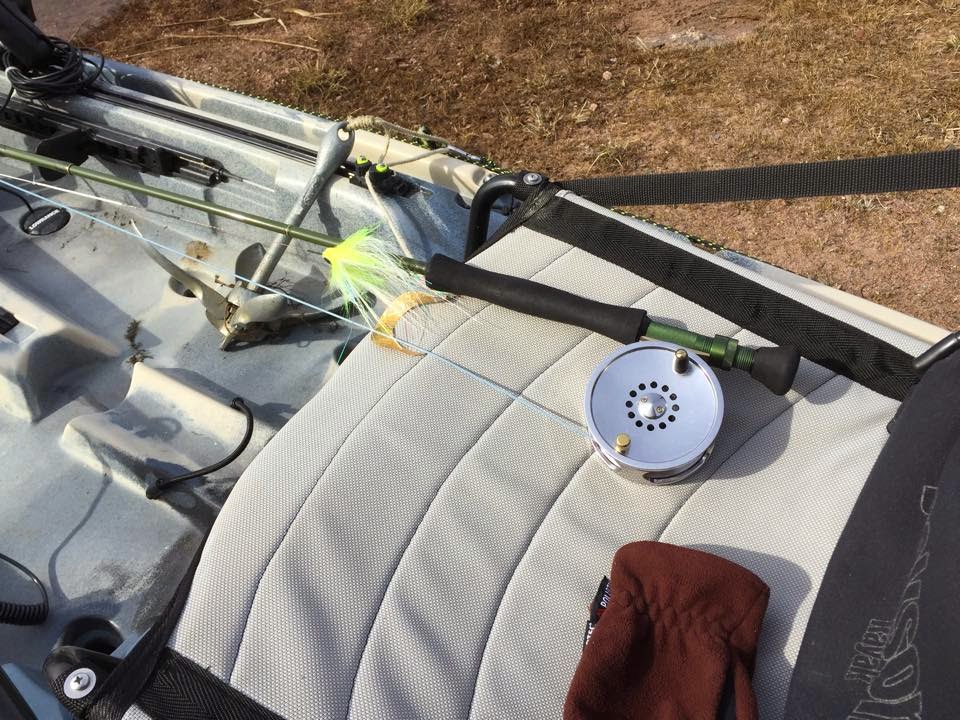 As I thought,no action,three small tiny hits on the fly on this nice warm calm day,fished for only three hours today.

Next weekend will probably be dedicated to fly fishing fair at Ylöjärvi on Saturday and on Sunday forecast promised hard wind so not sure if I be able to fish at all but at least season is on.
Lähettänyt Unknown klo 19.10 Ei kommentteja:

Tomorrow April 5:th will finally be D-Day for my 2015 pike season.I can say that it's a day I have waited for big time.
Not that I got any high hopes of any super catches but it will be nice to finally come out for some fishing.Also very often blanked my first trip of the season so.....
Got my pimped yak loaded on the roof of my car,new tied flies packed etc,etc... 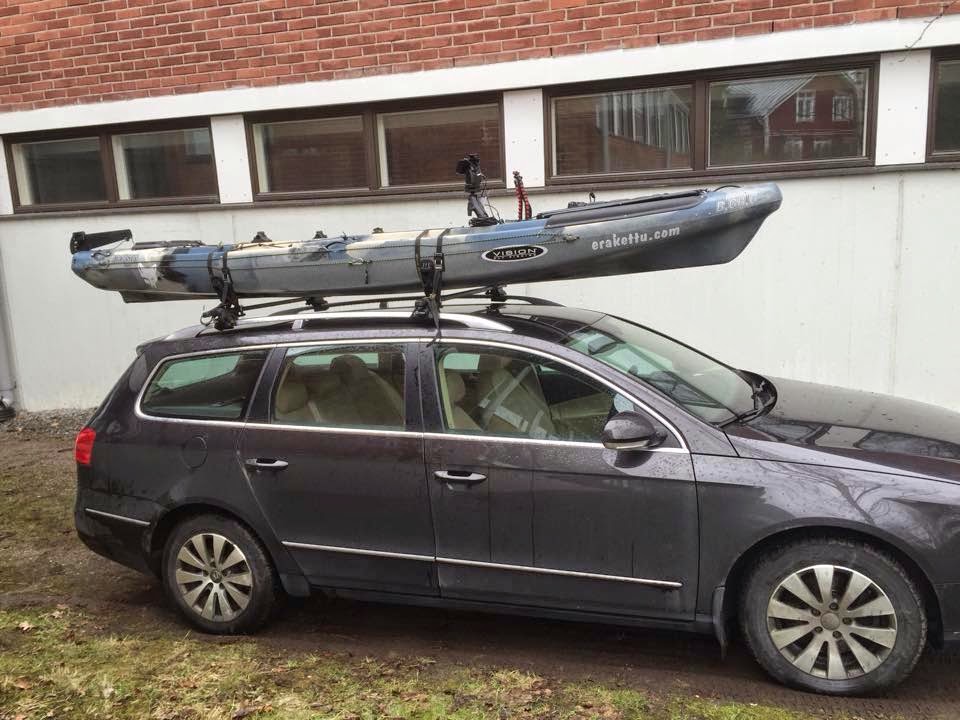 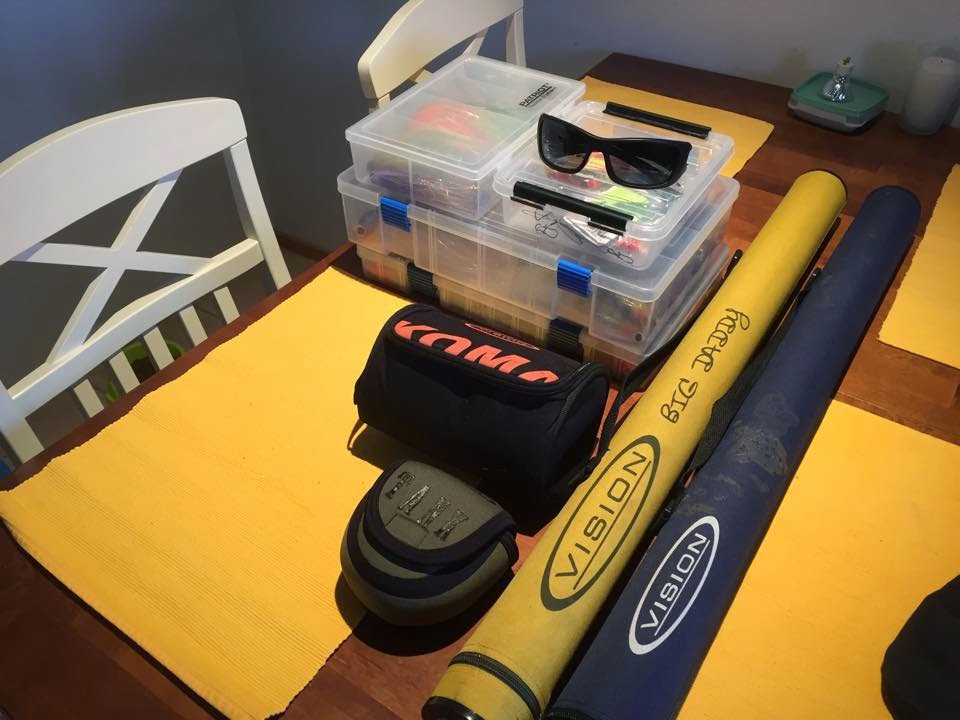 Feel so good to everything sorted out in good time.
Have tied up some new flies which I will write more about in some other post but feeling extra excited about Wiggletails and Pike Skinz baitfish patterns.

Forecast for tomorrow.....+5 degrees,wind from east 4-7 m/s,cloudy.not bad...not at all,biggest concern is that I have heard the water is very murky in most of the places so I need to find some clear water and just hope I will be able to break the "first trip blanking" curse.
Think I will spend a sleepless night,way too excited now,but need to try,hopefully I can add some nice crackin pics tomorrow
Lähettänyt Unknown klo 20.17 Ei kommentteja: