So the winter arrived as it always do sooner or later.Have had from -10 up to -20 degrees for more than two weeks now so there has been no fishing but all kind of activites which belong to fishing like tying flies for both me and some customer work too has been made.
Anyway,while tying flies for my own use I noticed a thing about my flies I also wrote about couple of years ago about lures,they getting bigger and bigger of some reason.

In this photo you can see the development of two very special flies and one tied lately. 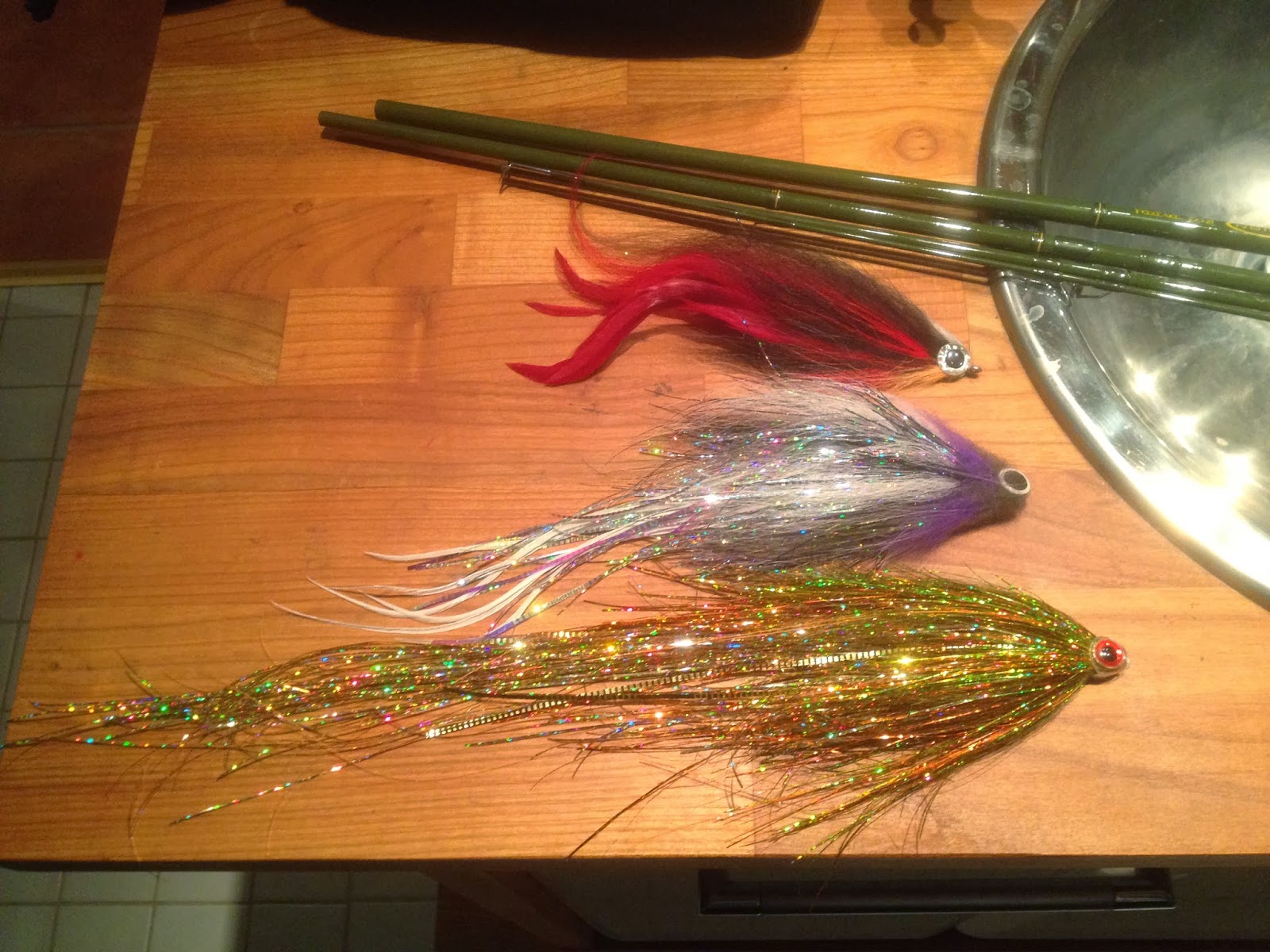 so what can we say about that ? IMO it says that you don't always have to use seagulls to catch big guns,the biggest of these three is about 40 cm and have cought a 61 cm greedy jack.
So why big flies ?
-Needs a lot of material
-Shitty to cast
-Unsure hooking without stinger hook (I'm working on it)

Actually I can't find any reasonable reason to use those big flies but of some strange reason I love to use them and that's why I do so,do what I enjoy of.
As I told you I have tied a bunch of flies as customer work too and even they have been 30-35 cm:s so it seem to be some kind of a trend to go big.
Here is some of both my own and some customer ties. 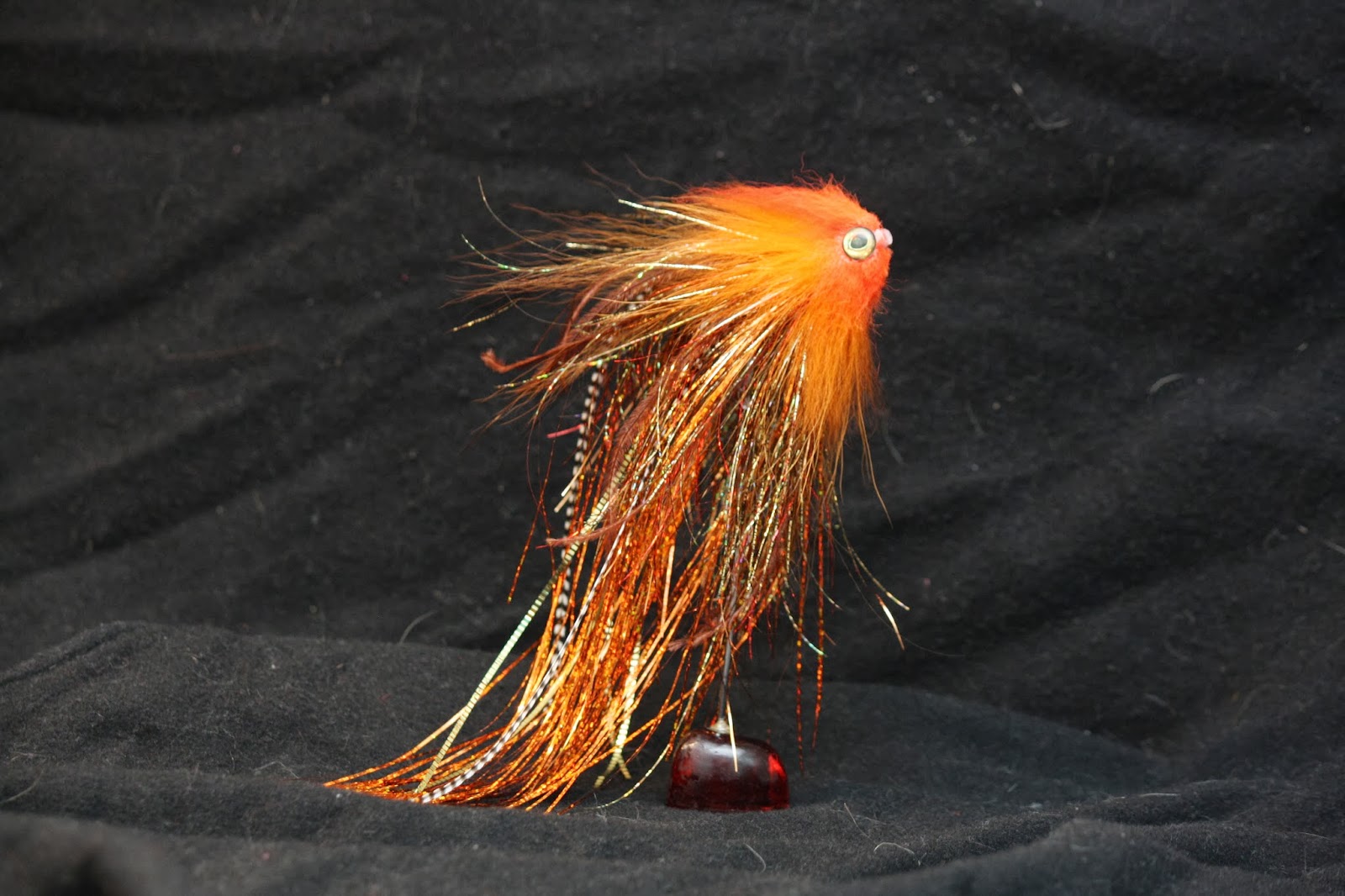 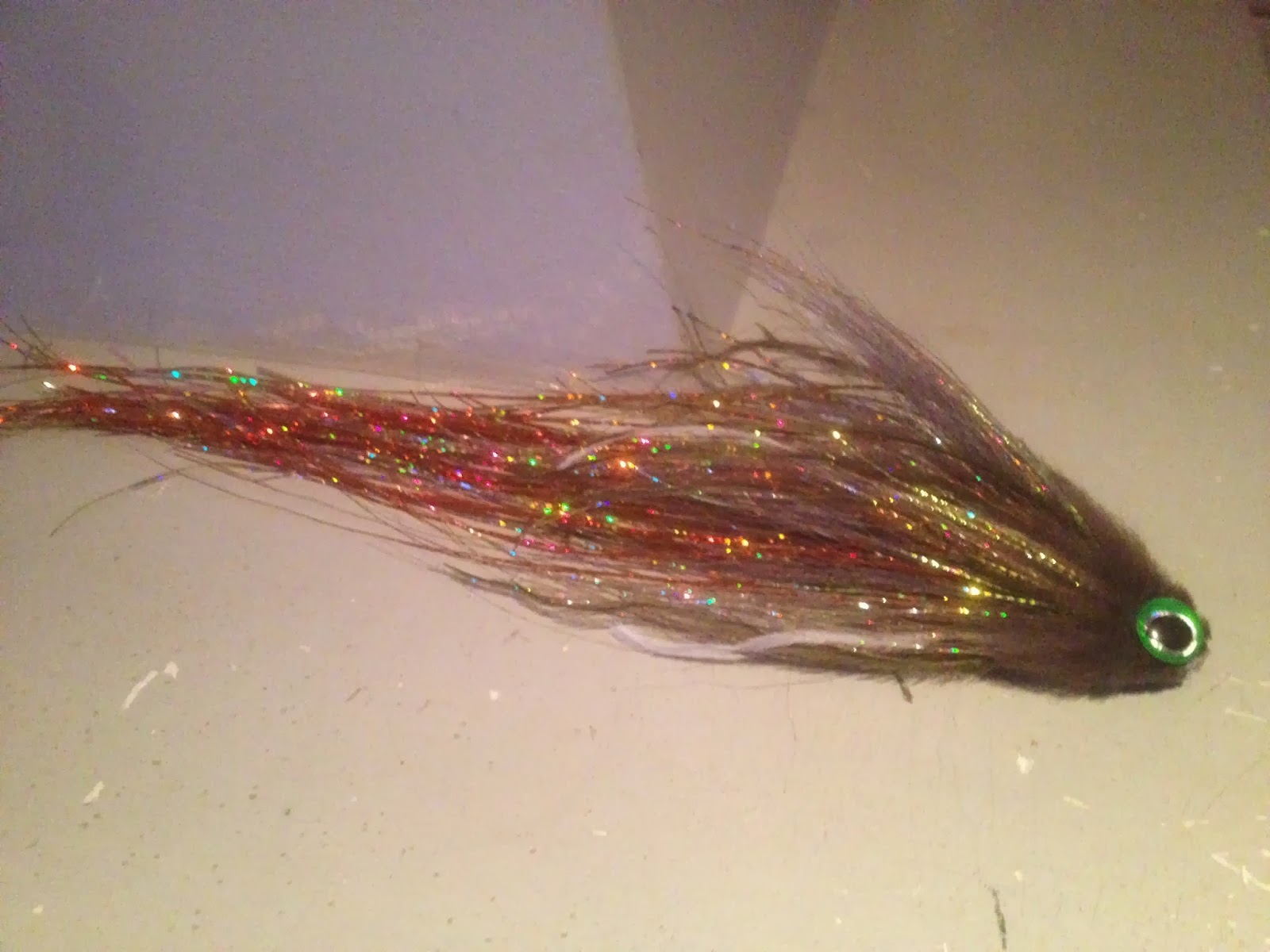 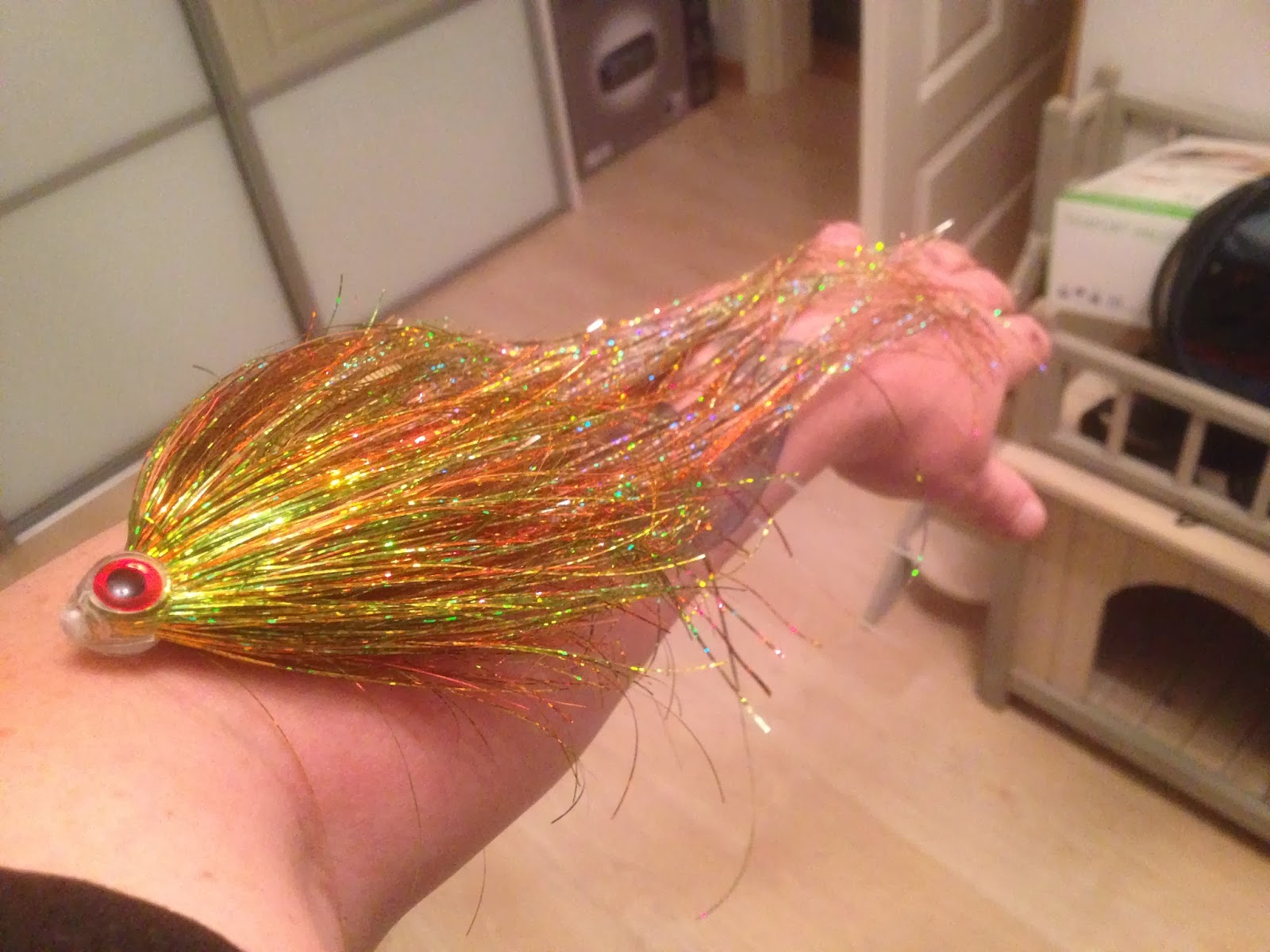 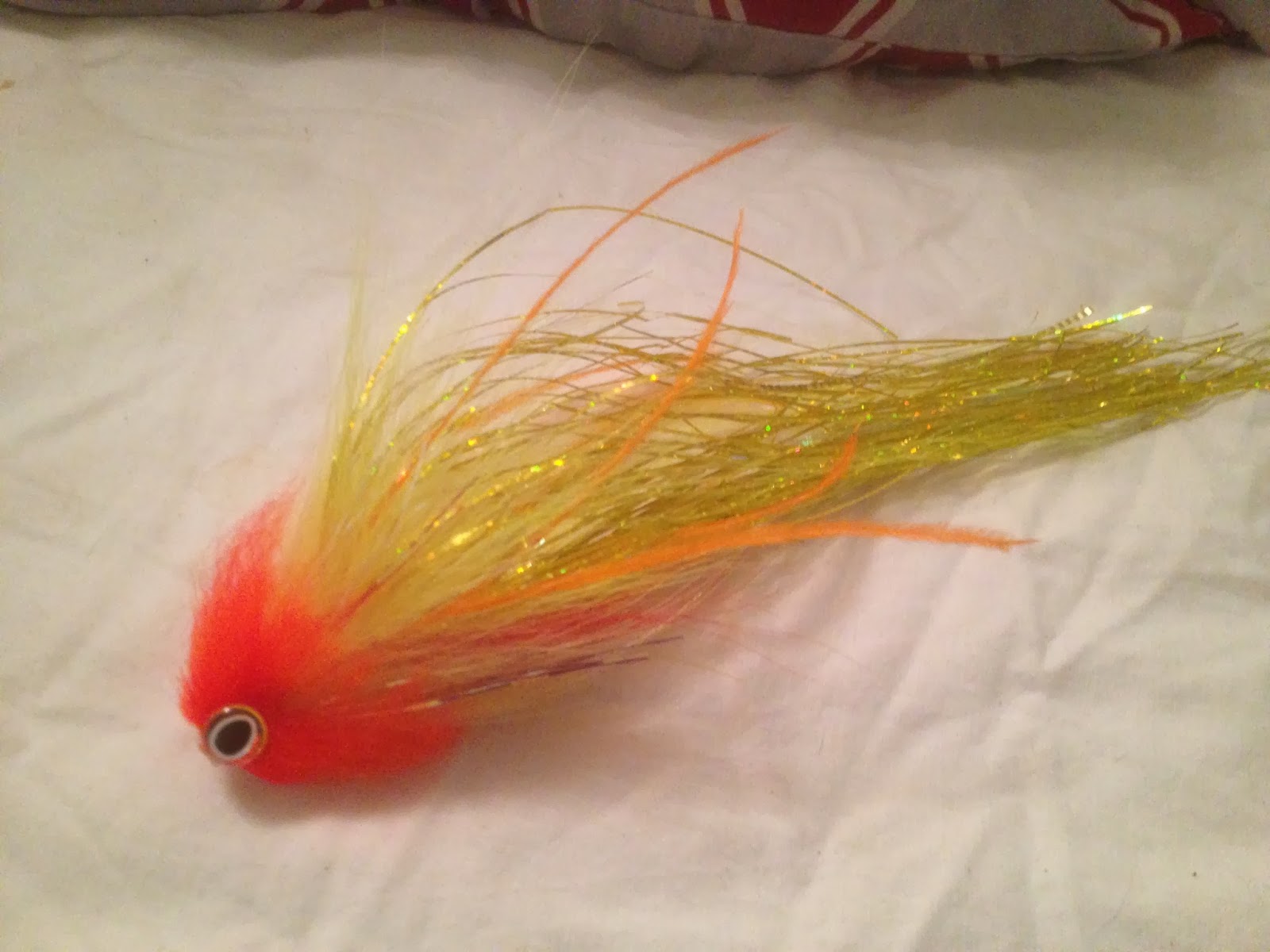 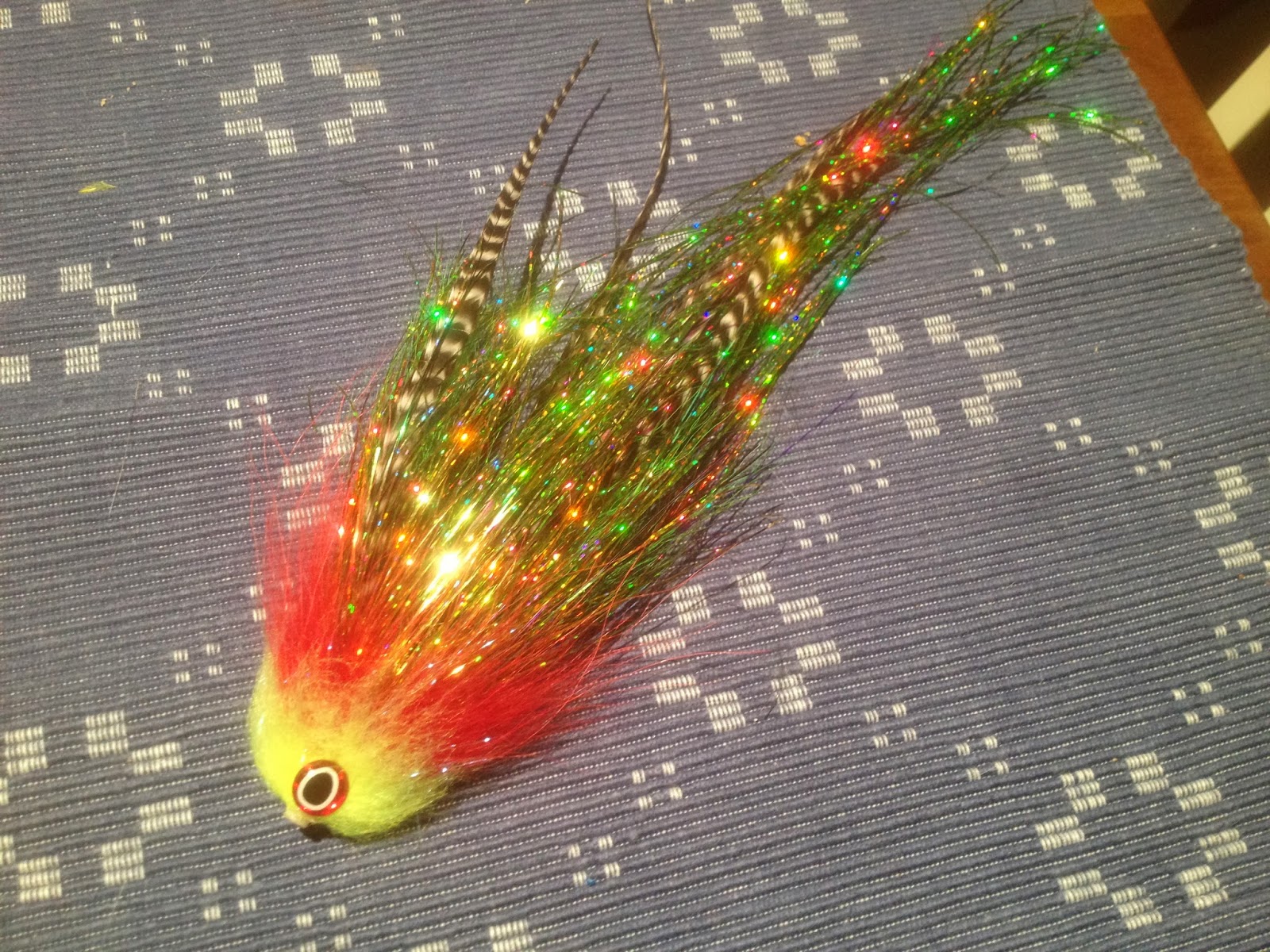 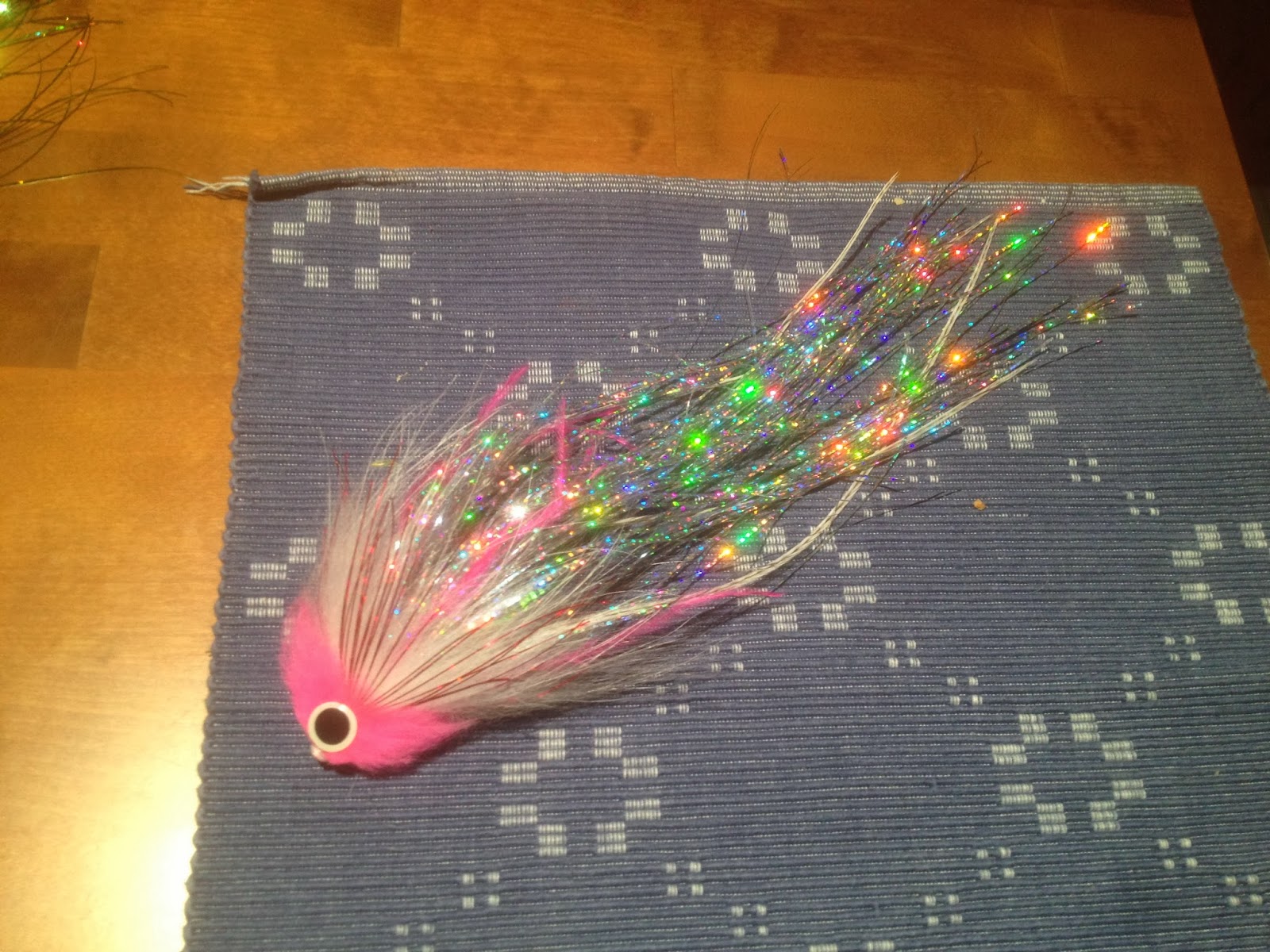 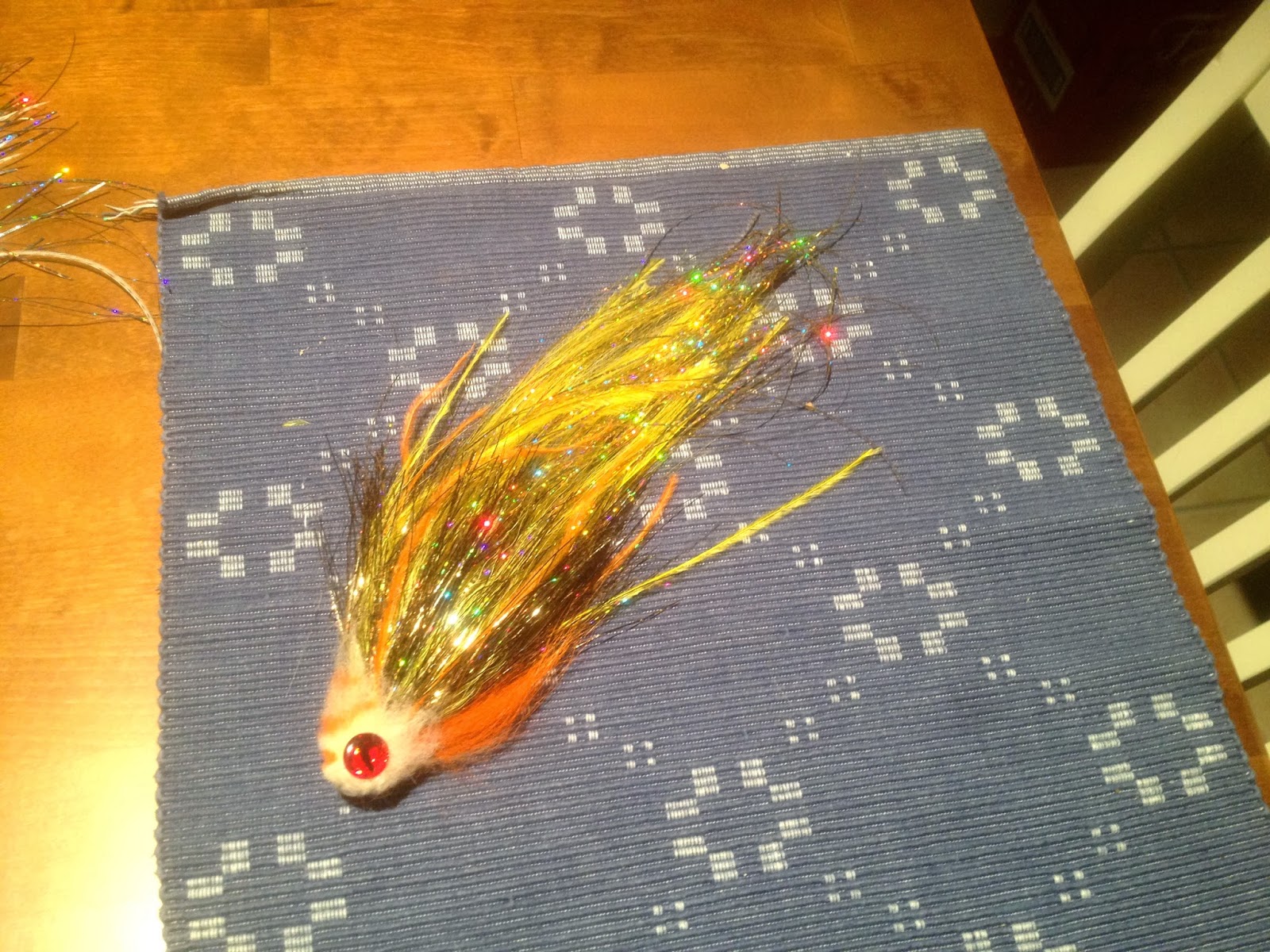 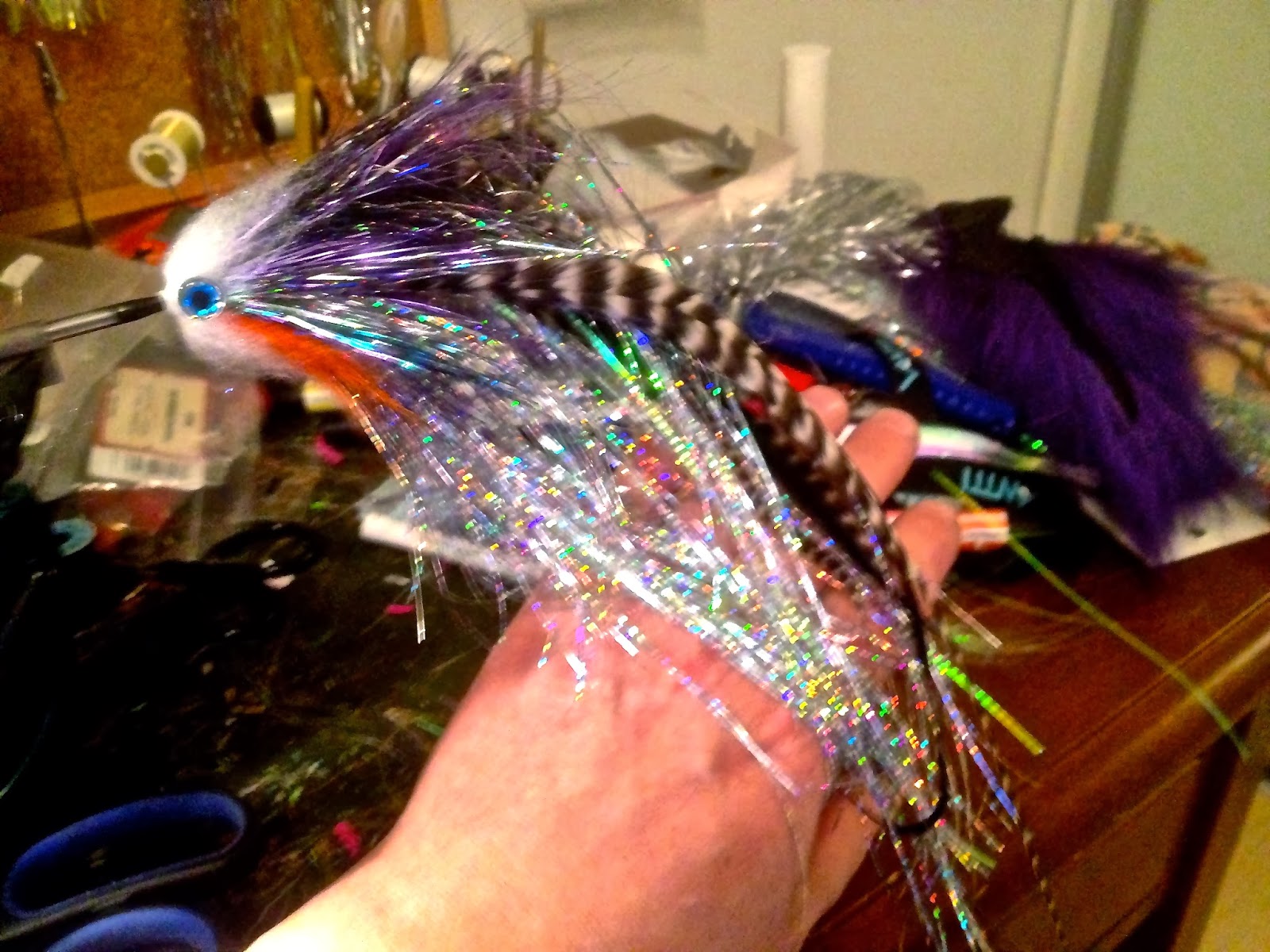 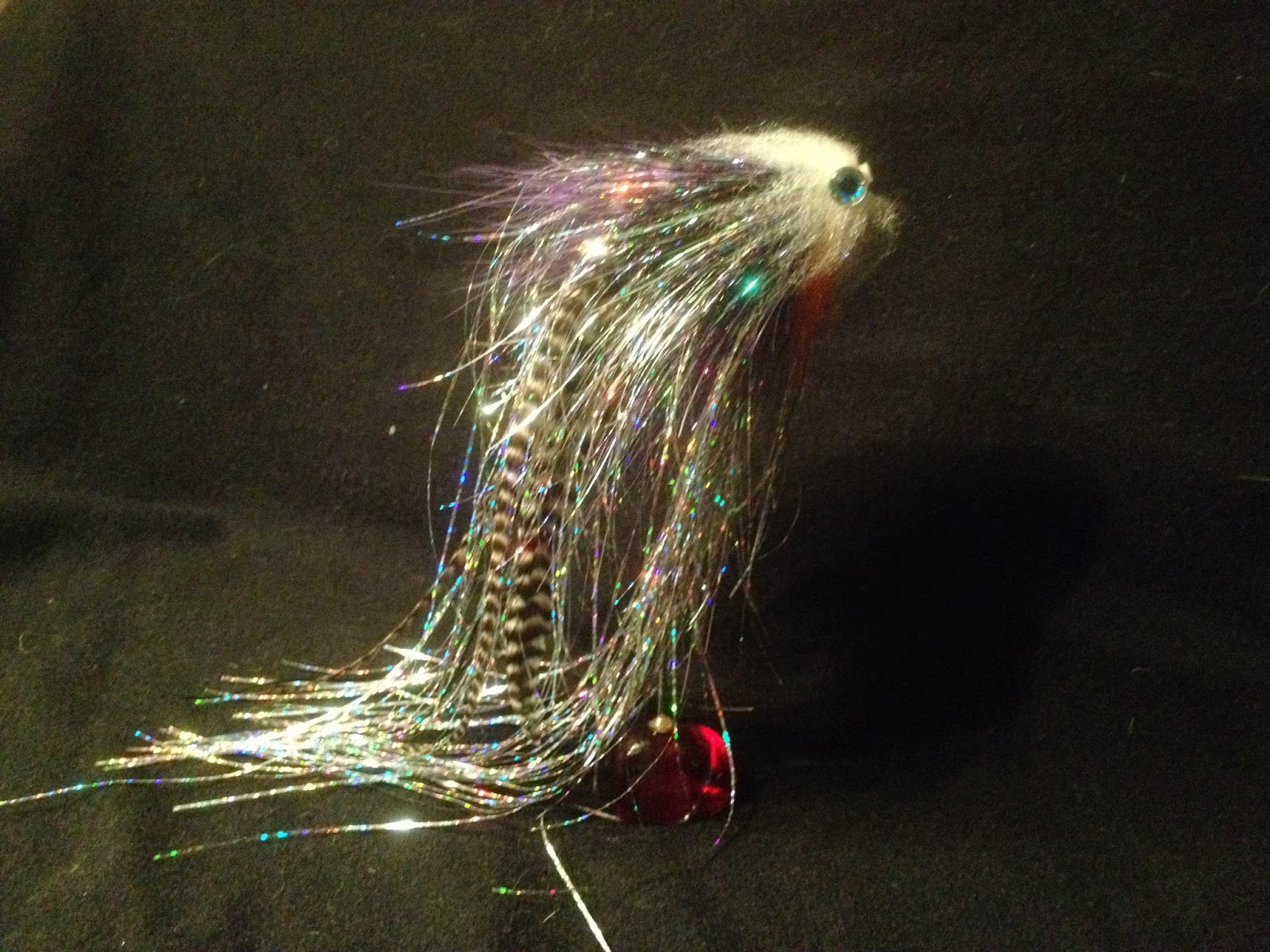 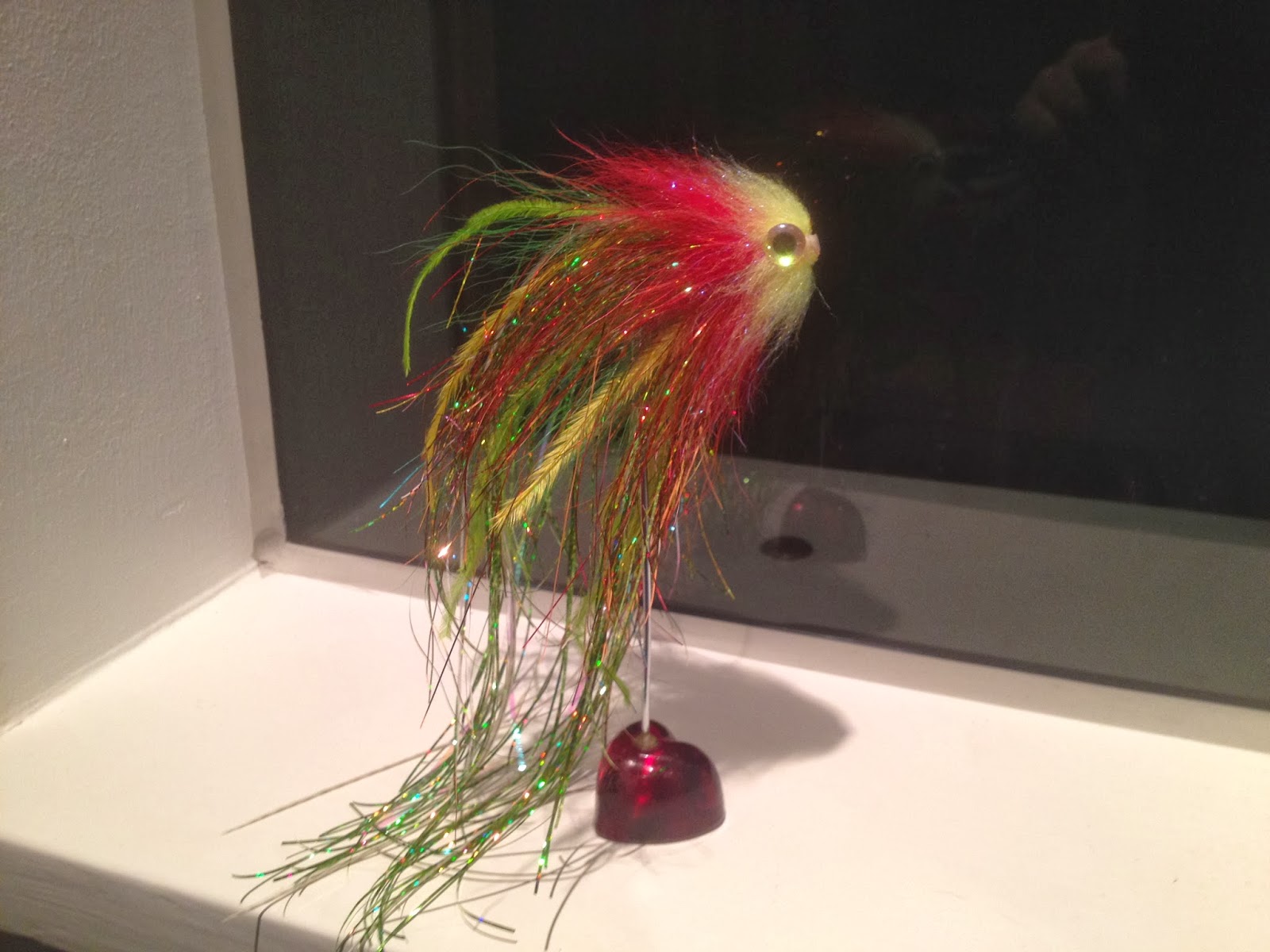 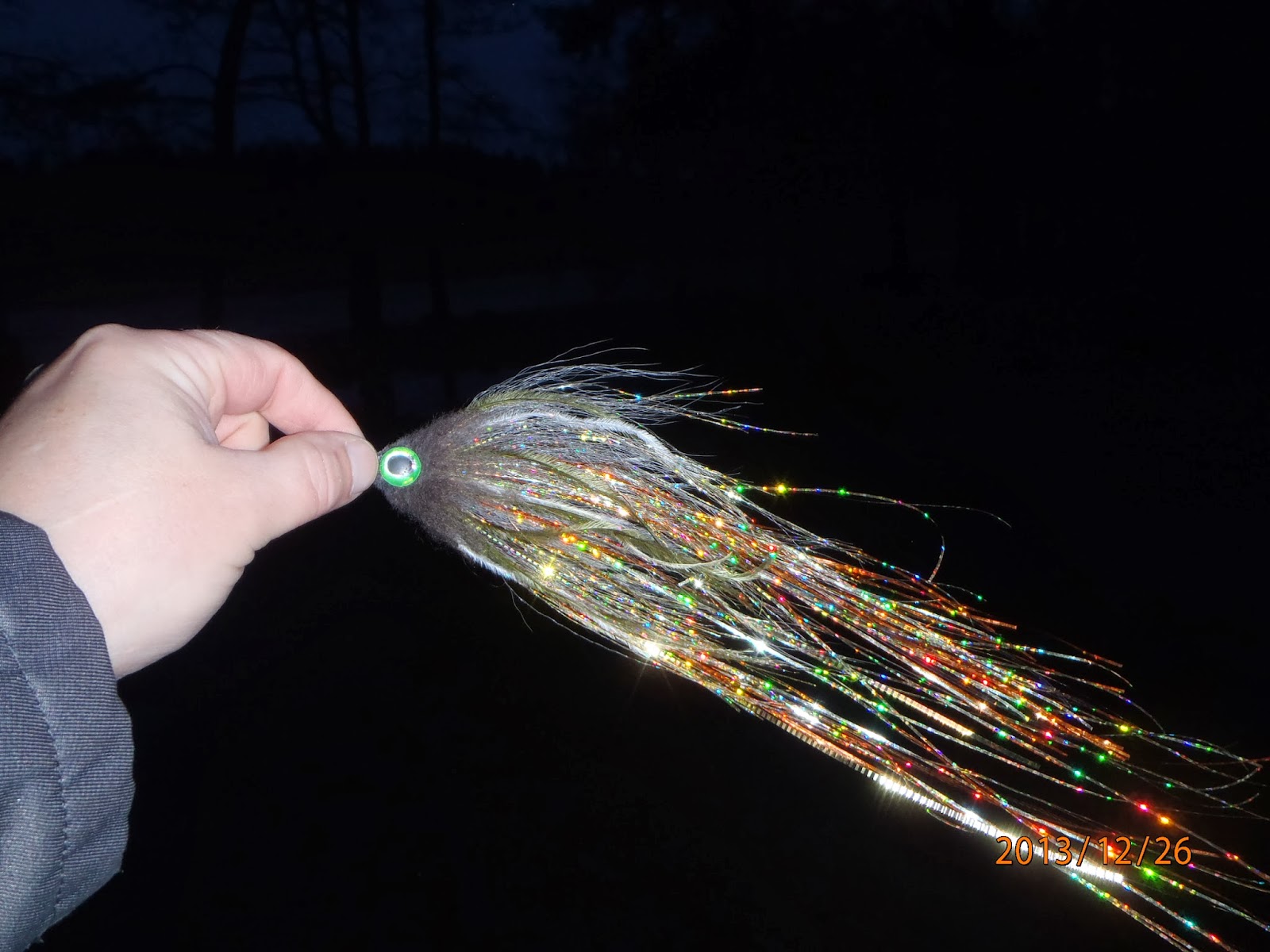 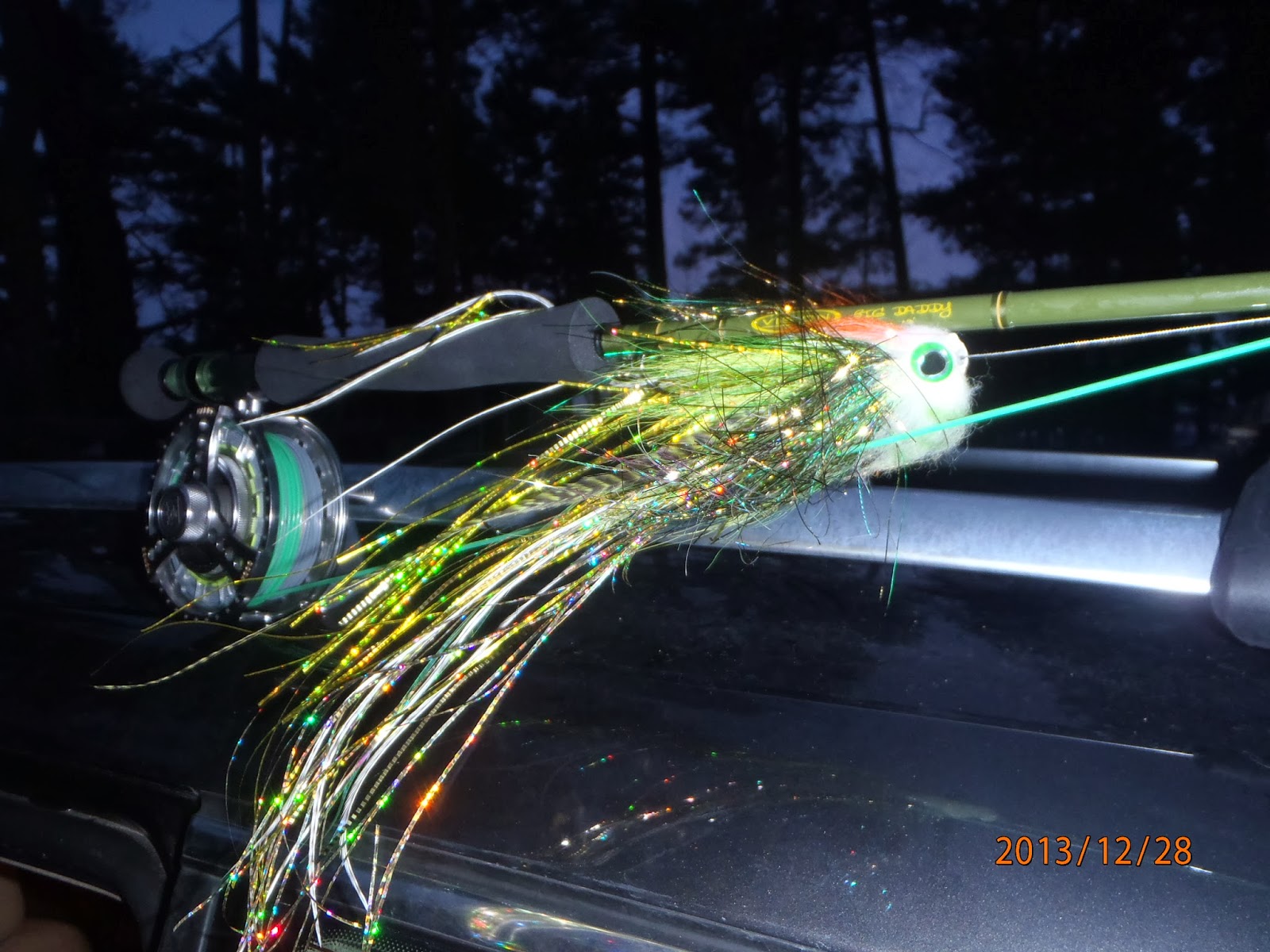 And not just same patterns,made up a simple tie that was to be tested a time ago but winter and ice destroyed that plan so no more of these before swim tests. 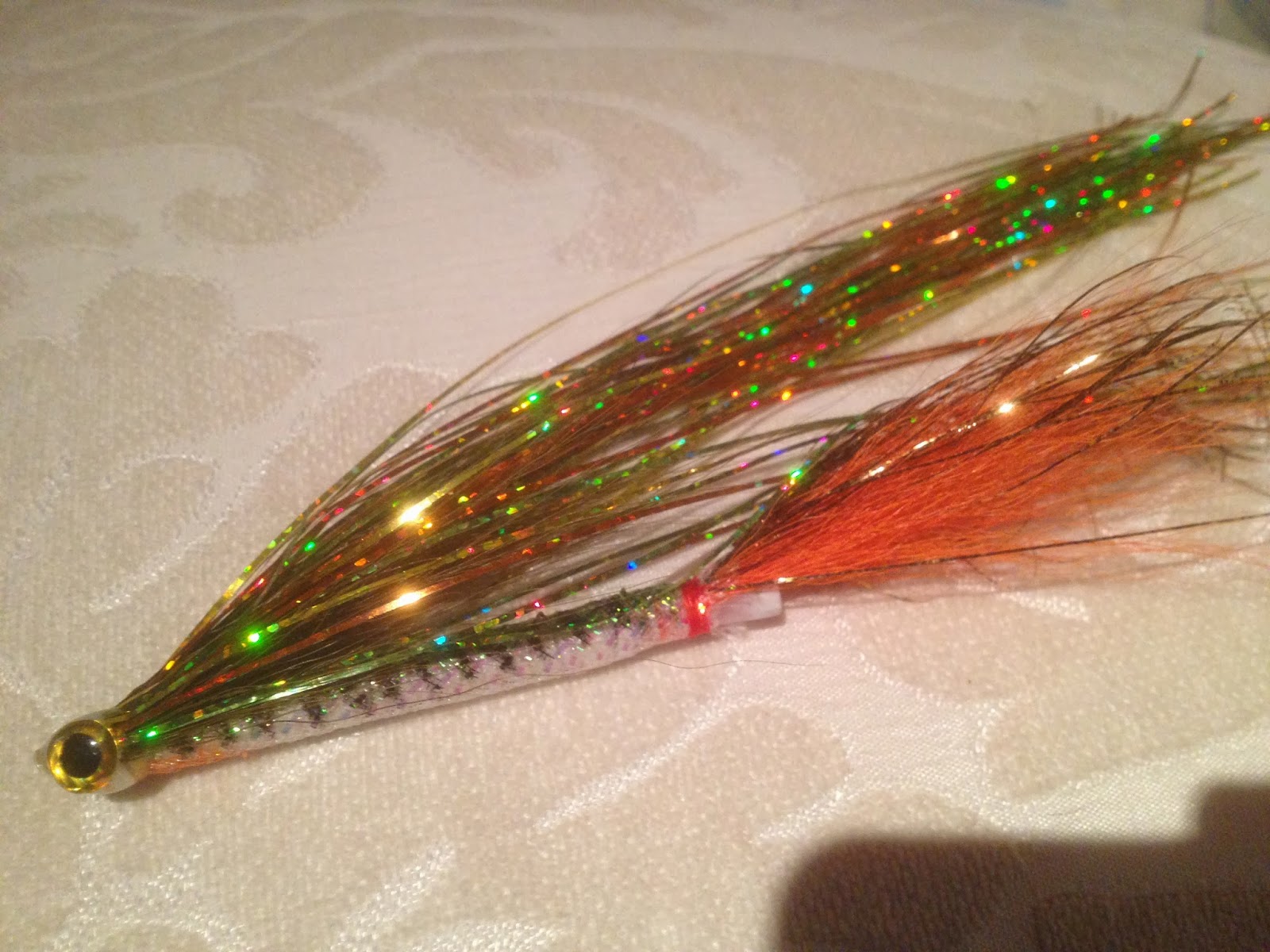 And finally my second attempt to a articulated fly,first one was just shit,all materials tangled round the hook.
Now,couple of years after that disaster I decided to give it a new try,totally different style this one and just like the ongoing trend it's big,46 cm.Tied on a homemade shank and a Sakuma Manta 546 hook in size #6/0,yes,only one hook,gonna try with it,made so it will be easy to add a stinger if needed,hopefully not. 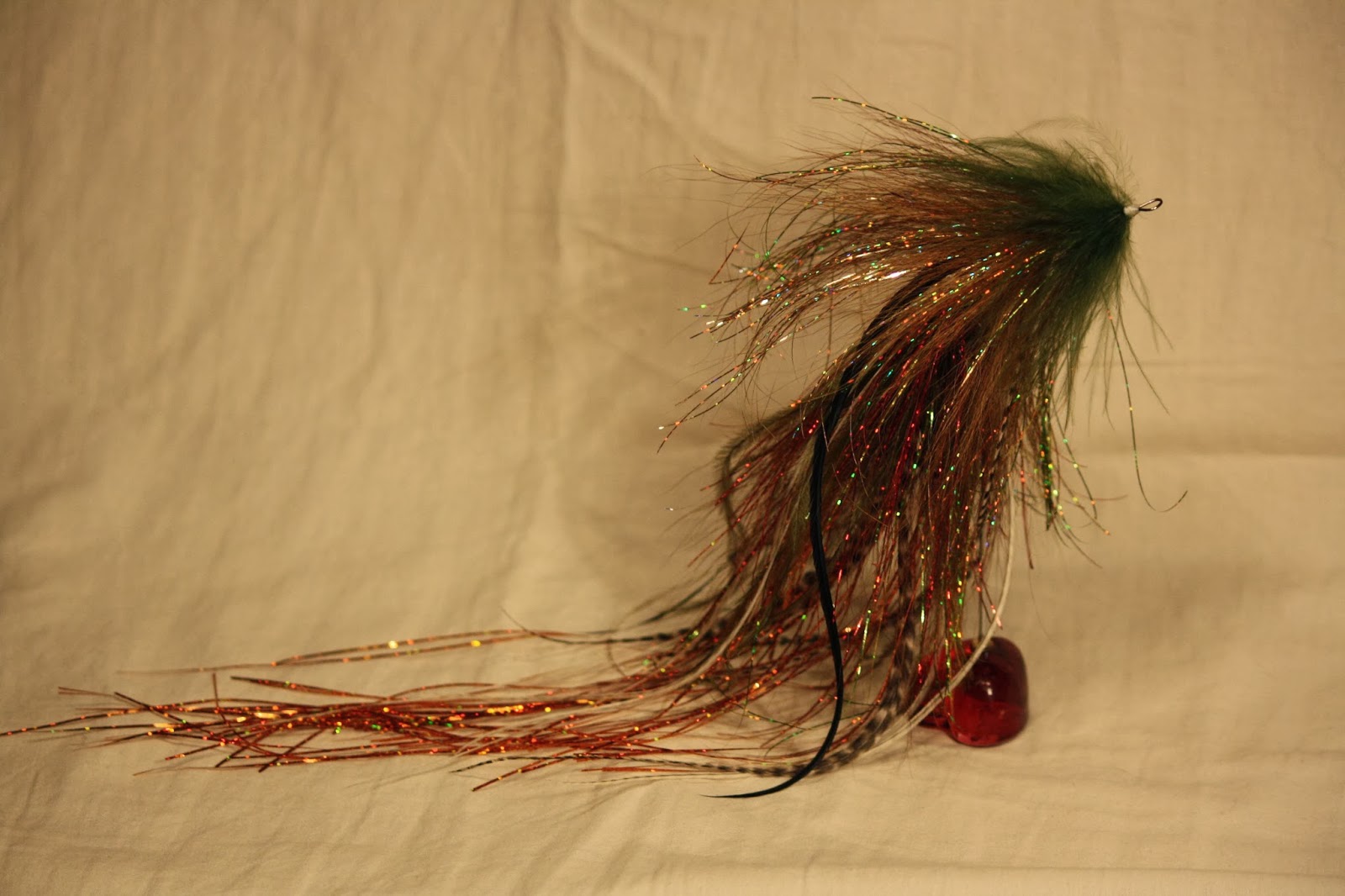 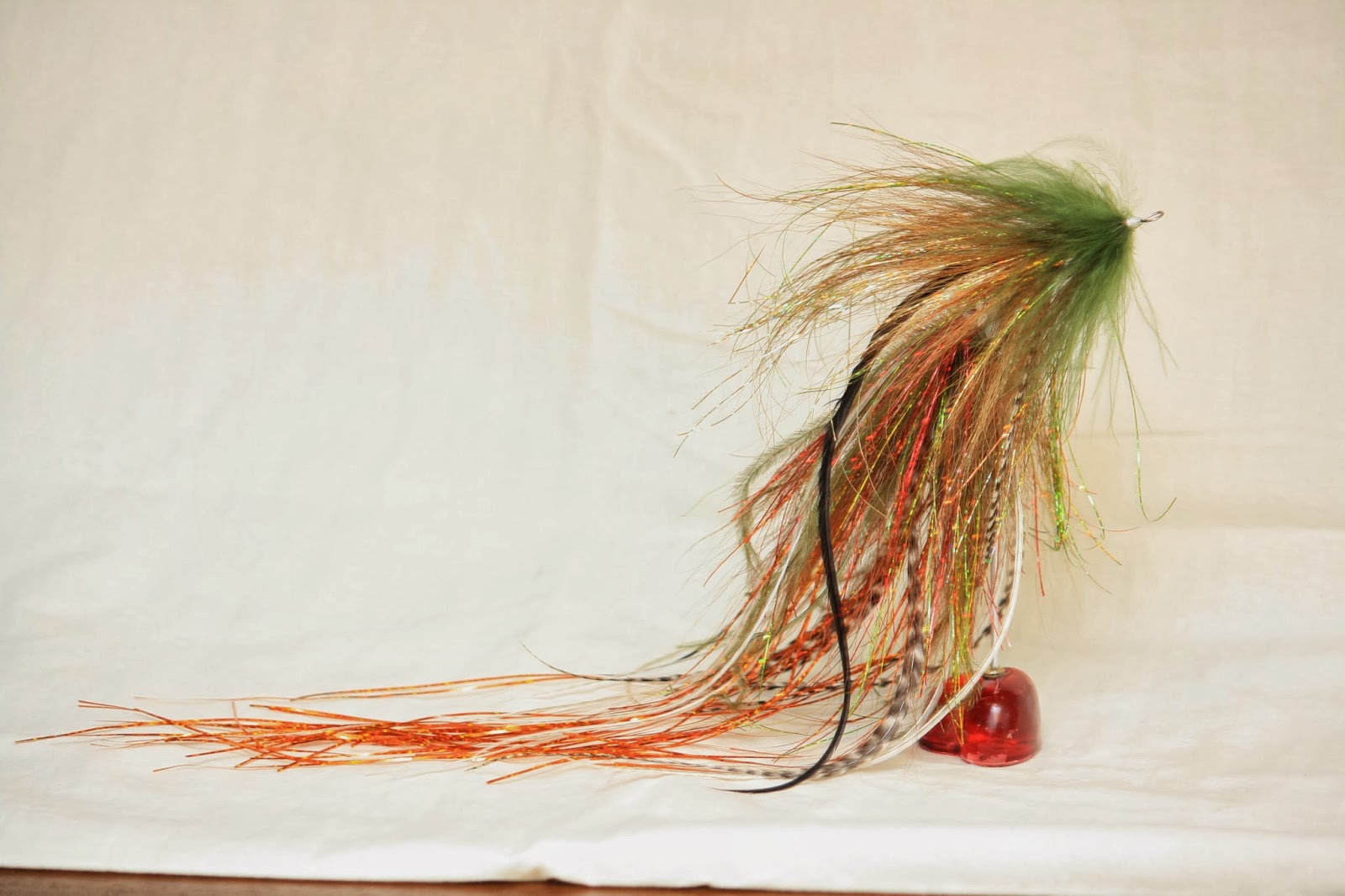 Added two photos because I couldn't decide which one is better.
There's a thing that I'm gonna study too,would like to take some nice pics of landscapes,fishes and flies.
Lähettänyt Unknown klo 21.13 Ei kommentteja:

Gonna add some small report of my latest trip fly fishing for pike with my friend Pietro last Saturday,a small because there isn't that much to report.
Woke up of some reason 4.19 am already even if we had our meeting 9.00 at the shore but at least I had some time for breakfast.
Still I was  before 8.00 am down at the shore with my waders on,my kayak packed,in fact,everything was ready so instead of just staring out at the sea I decided to go for some fishing close to shore while waiting for my Italian friend.
Pretty tough wind was a thing I noticed as soon as I came out a bit from that sheltered place I launch my kayak from.
Didn't fish so seriously while waiting for Pietro,it was more like testing some of my new flies,no fish contacts and soon Pietro called me and I decided to meet him at the shore,but one more cast...and fish on.Not a big gun but at least we had our game on and everything looked promising.
Funny how those small jacks attack 40 cm big flies. 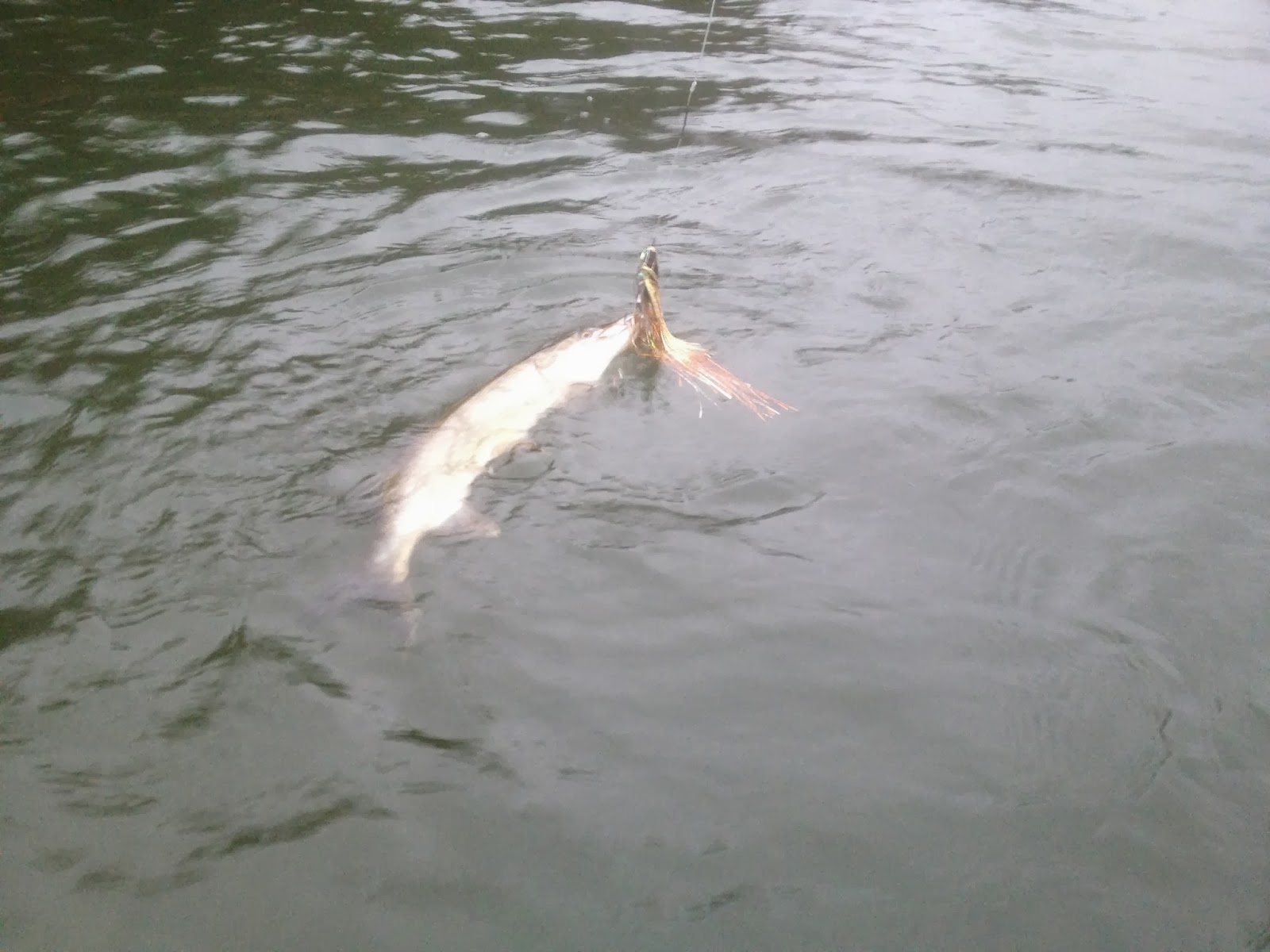 Anyway,I went back to the shore and we made up a plan how we gonna spend the day,had to go for some efficiency because Pietro went out with a floating tube and it's getting dark at 3 pm so we had not that much time to spent on just paddling around.
So,our plan was to go against the wind to a bay were we had some opportunities to fish bot windy and calm sides and the let the waves bring us back when we have had enough. 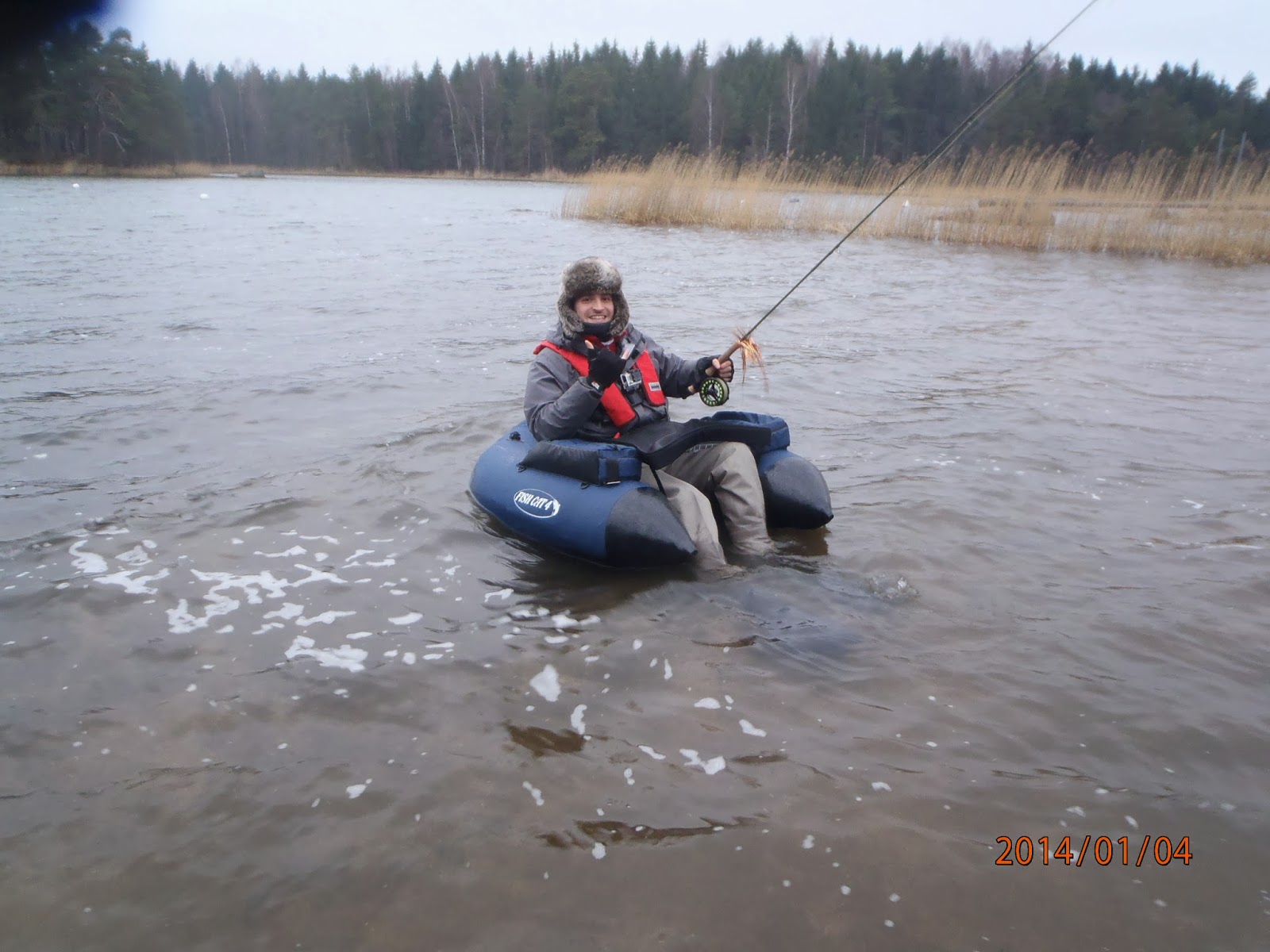 I was there some minutes before Pietro and decided to start from the windy side and fish systematically but all big waves and wind combined to no contacts made me change my plan to fish from the calm side while Pietro stayed hammering the windy side.
Later we noticed that there was no matter were we fished,zero hits for us both.
Moved on to a small totally calm "bay" which remind me more of a pothole with gin clear water and only 40-50 cm deep. 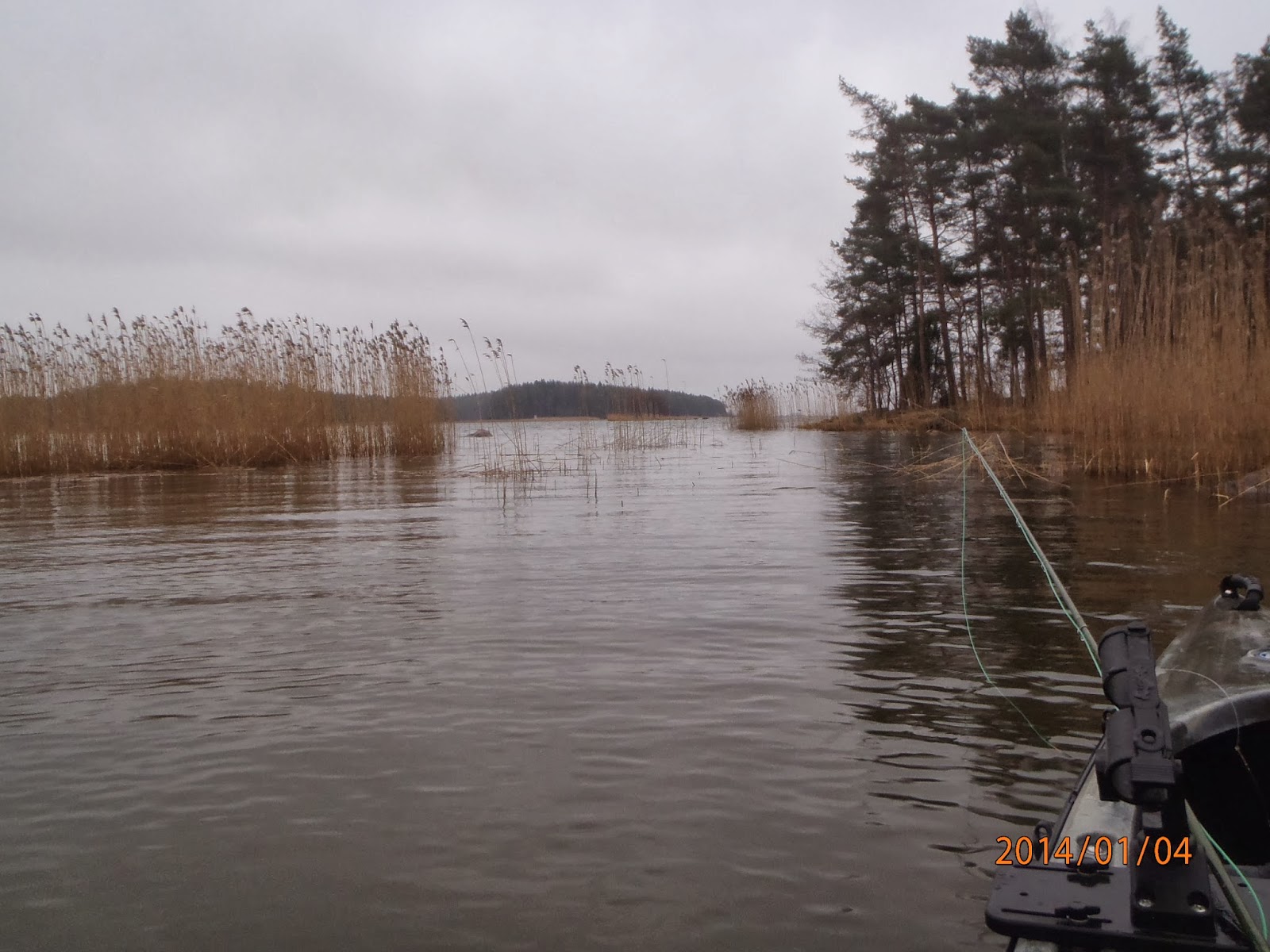 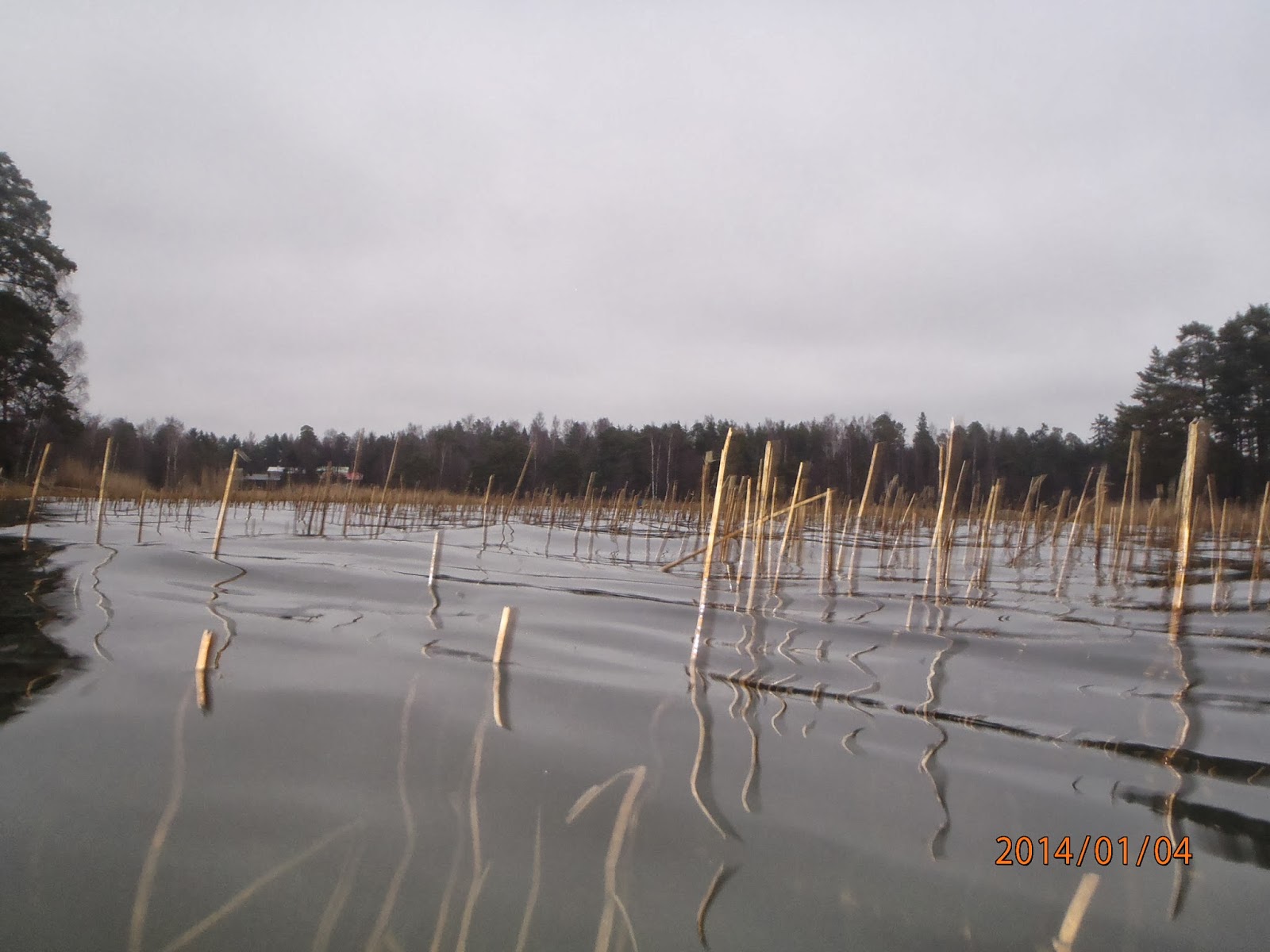 It felt strange to move from a raging sea to a totally calm place,felt like time stood still,so quiet,putting away my paddle sounded like a earthquake.
Fished here and saw even Pietro closing in here.
When I fish long enough without any contacts I start to loose my focusing,and that's what happen next.

I was retrieving my line thinking of this and that when I thought I saw something.
My fly was about 40cm long and every single strand suddenly disappeared in a mouth of a greedy good looking slightly better ma'm.I had her hooked for maybe 15 seconds,I would say 90-110 cm
long with a wide muscular back when she was about 1 meter from my battleship at the surface,it ended as quick as it started,BANG,she was gone and I was left fumed sitting in my kayak.
from that moment I was focused but as you can guess there was no more hits.
Also Pietro had some problems in a way of leaking waders,so we decided to slowly go back to
shore,pietro first and me after fishing some casts here and there but....nothing,it was like
fishing in a well.
Pietro already stood at the shore and me neither me saw there was any use to continue so I also paddled back and after a big cup of warm coffee we both were ready to start our way back home.
Not a easy task this but this is why it's so funny,sometimes you just get beated.

Had me just couple of beers day before so no wonder I was early at the shoreline witness that water level was about two ft lower than at my season ending,also noticed a very tough wind around 12-14 m/s and as cherry on top it blew from a direction I knew I would not be able to fish my ordinary spots,but.....I was here with only two to choose from: Fish or go home.
I didn't go home so after 30 minutes I found myself out at the sea  in a rocky ride.
I knew that fishing would be tough and after a while training cast I managed to land my first fish of 2014 season,not a big one but hey,they all counts or ?... 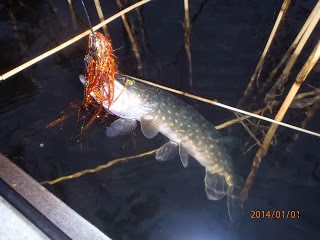 At this stage I have to say that the fly you see above is turning to a "must have" one.
Very nice that also other combos has turned to deliver well,not only black/white/silver.
A color that Swedes seem to like,green/gold is also nowadays a important combo in my boxes.
This combo Copper/orange/black has fooled a lot of pikes in late autumn.
Well,back to my season opener,of course I had to try to get to that same bay where I knew almost 100% sure that some big guns would be in but I quickly saw that there's no way I could get there with my kayak in these weather conditions so I just had to fish carefully these places I could reach.

Put in cast close to the shoreline and was slowly retrieving when I felt a slightly better hit,not a massive attack but a better fish anyway,this one park her ass to bottom and I tried to rip her up.
Suddenly it happen,I dropped her without eye contact with her so there's noway I could say was it big or not,luckily it didn't felt big.
Like always after a contact I use to check my hook,leader and trace and I almost dropped my eyes to this sight. 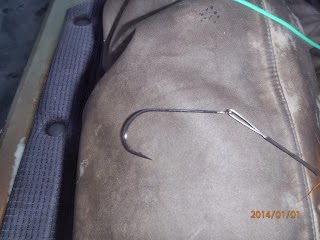 Not the first time it happen but first time with Sakuma hook,happen also couple of years ago with a Fulling mill Scorpio hook,that time I managed to land the fish but not this time.
Wonder what went wrong,have landed hundreds of pikes with these hooks with no problem.
Manufacturing defect ???? don't know,still have faith in these hooks,everything (almost) deserve another chance.
New hook rig on after i also changed my leader,just in case.
Fished without contacts in over an hour before my next fish,very shy nibbling for a while until he hooked himself up. 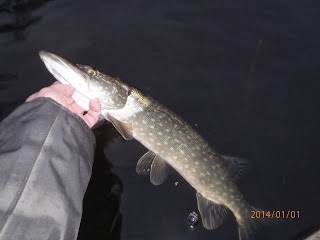 Took also some landscape photos while I was wondering where to go next. 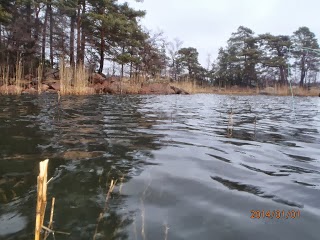 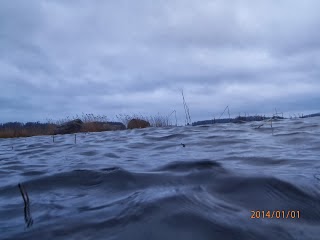 Not much to write about,my bad luck continued on my way back when my seat snapped in two pieces on my way back,well I always capable to test Wilderness Systems Warranty now.
Fished some casts on my way back to the shore with two more landed jacks before I decided to get back home.
Lähettänyt Unknown klo 13.38 1 kommentti: