I have every now and then tried to fish for pike with topwater flies which have always been poppers.
One thing that have been very annoying with poppers has been it's a big pain in the ass to cast and second thing has been you can't land them with poppers,well...guess the strike is the main thing but if you drop a fish of your life it might get you a bit upset.
The venue I have fished lately got huge shallow areas with tons of reeds and it has bother me some time because I have been pretty sure there's some pikes hiding among all that vegetation and I have tried to find some solution to fish at that area too.
Tried some tube flies with a offset hook but it didn't work as I wanted so I have let the place alone.

But I might have found out a solution how fish that area,at least last time I was out fishing it worked well,in fact very well.
I'm a member in a group on Facebook "Northern pike fly fishing Finland" and read about a fly "Surffilauta" (Surfing board ?) Originally created by a famous Finnish  fly tyer Pertti Kanerva.
The fly was designed for trout but has caught a good amount of pikes too and some experienced guys in the group has tied a "pike version" of that fly.

Imo the fly is ugly as hell but I still it really arouse my curiosity and I tied one,just one fly without a recipe for some test and oh my how fun that test finally became. 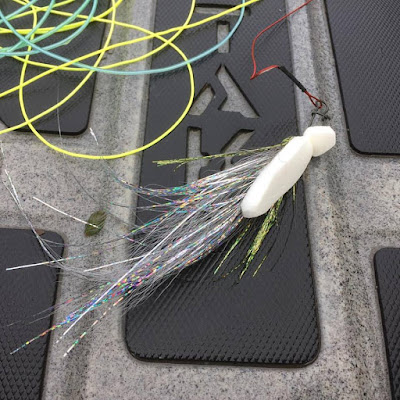 Not landed any big Mam's on it but gosh those strikes are so cool,
Casting on a shallow shelter area with a lot of reeds,roly-poly retrieve,both slow and fast and suddenly when the surface explode you really get hit by a huge adrenaline kick.oh man I loved it.

Found only two SBS videos for this fly on Youtube,both pretty small patterns,mean't for brown trouts.
Fly is easy to tie and hopefully I could find some time to do a video of it too.
I really recommend you to tie couple of these to your boxes.
Lähettänyt Unknown klo 9.06