Have been over 30 degrees celsius for a week now so there has not been any fishing at all and even flytying has been in background now because of the heat.
even the water temp has again raised over 24 degrees almost everywhere I use to fish.Anyway I have a plan to go fishing tomorrow but it depend what the forecast says,
don´t wanna go driving around in boiling and pea soup coloured water spiced up with a massive bed of blue-green algae.
The second horror-scenario is heavy rain and thunder that has shaked western part of Finland coming to Lovisa.
Well,it will be tomorrows concern.

Have at least tied to new flies,got me an idea from my last post were I mentioned Body fibre,it´s a little bit like Slinky but softer,actually so soft it´s hard to get any profile on your fly without for example to tie Bucktail under it.
Have lately tied some flies of SF blend and decided to blend some SF with Body Fibre
And have to say I think it works,it still has the softness but on other hand also some posture.
The idea of the colours are inspirated from Simon Grahams late postings,They looked so awsome I just had to use them(colours). 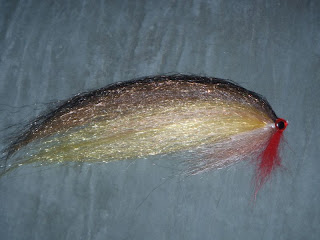 The second one looks just black but there is a dash of silver and pearl coloured Lateral Scale,have big expectations on this,Black/silver combo has been outstanding this year,pikes have destroyed three flies with black as main colour,let´s see what happens with this one. 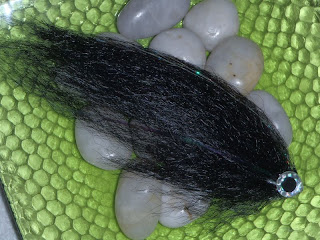 Both flies are about 17cm and are mostly planned for the coming Autumn but will be tested ASAP.
Lähettänyt Unknown klo 20.58