One fly each day seems to be my tempo,well why hurry?
I was going to test the fly I tied yesterday in swimming pool but my friend had something else going on so there were no testing today,wouldn´t want to tie too many of these before Í´ve made some tests.
I couldn´t help myself so I tied this fly,little different then the one from yesterday. 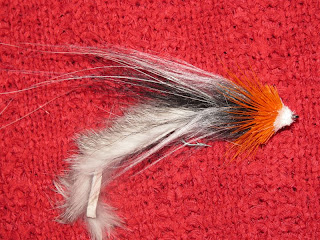 The hook is a Mustad 34011 3/0.
The tail is rabbit strips in chinchilla colour.
Added some Bucktail in black.
The body is tied of Polar fibre in steelgray colour.
Added some fosfor hair.(should be looking good in twilight)
The head is tied with Reindeer in orange and white.

I´ve also told you that the fly from yesterday was my first with a head tied in muddler style,well,I have to confess that I found a photo that show you that it was my second time using that technique here is the very first. 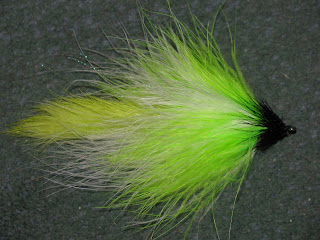 Wonder were the hell this fly is right now...

Also told you that the New Vision big daddy fly line is everything I will need before the season opener but today I found out that I need new scissors and some razor blades if I´m going to tie more muddlerheads,could be better finish on this one. 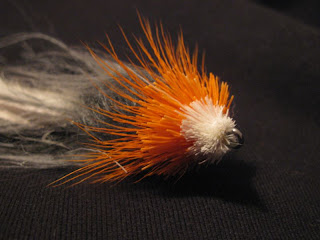 Damn,when I look at my first muddler I feel that I´ll have to tie some more of them,but with marabou.
To be continued......
Lähettänyt Unknown klo 20.46