Still very cold outside but maybe I become in better mood when I write about trips from last summer and especially from autumn.
August was due to the HOT weather conditions a month when I tied more flies then fished with them,but at least one decent sized fish(90 cm around 6kg:s?).But the most memoriable moment of august was two trips in a row when i hooked myself,
first when my fishing pal get a fish on a Rapala wobbler and when I was to off hook the fish...actually I don´t now what happend but the pike went away And left me like this. 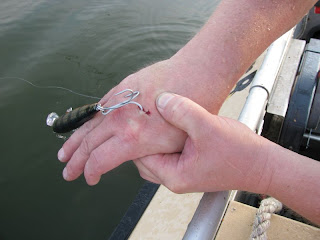 It was a hell to off hook myself because of the hook with barb,the hook was also thick enough so my pliers couldnt cut off the hook so I took a knife and made the hole bigger and ripped the hook off,it hurted.....A LOT!!!!!

On the next trip it was my own fly hook I got in my hand,off hooking a pike,not fast enough so the pike decided to "help" me little,this time I had a barbless hook so no dramatic here. 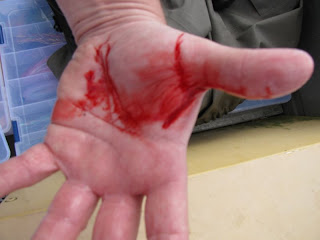 After August comes September and it started with a very bitter blank draw,I mean my friend Romo came to Lovisa and of course I hoped that he would had get a decent sized fish but after several hours fishing the result was crushing:not a single hit,not on flies,not on spoons,not on spinbaits,and someones says pikefishing is easy.
At this stage expectations were sky high. 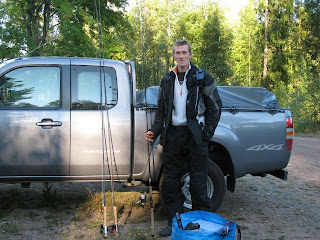 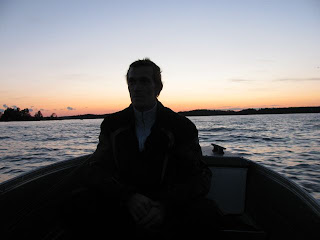 What else about september....Oh yes,I got my biggest pearch ever,about 35-40 cm and weight +500 grams.
One very strange thing in my opinion was that the august pikes were bigger then september pikes,Not sure but I think the biggest was 74cm.

One thing I also remember from september was when the nature slowly started to preper itself to winter after the hottest summer I can remember,I cant remember when I last fished in september with a T-shirt and shorts in sea conditions. 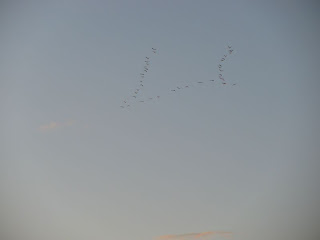 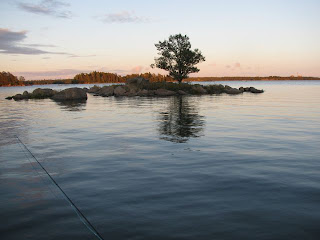 The rest of september was only tying new flies untill the last week I got the SMS to my phone from a shop called Spey Clave were it says that my new Hardy Zane rod and Hardy demon reel has arrived to finland.
It took a week before I could go to Lovisa and test it.

At the first trip testing the rod i get my new PB but enough about that.
The next step was to buy a new boat that i had dreamed of for several years.
God I was so happy to get a bigger boat so I was able to expand my fishing area.
Bought it on friday and next saturday morning it was in water at Lovisa archipelago. 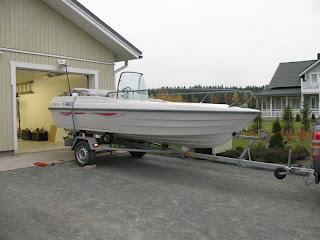 With the new boat I was able to reach the places I usually only could dream of and it was really enjoyable to see the new places in reality,not only on a map,and almost immediately the size of my pikes become bigger,many 90-100cm fishes was caught in october,of course MOST of my fishes wasn´t that big. 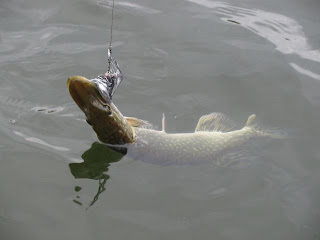 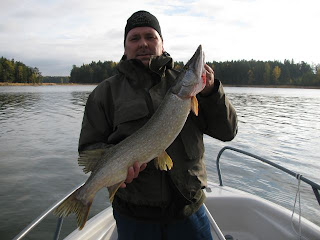 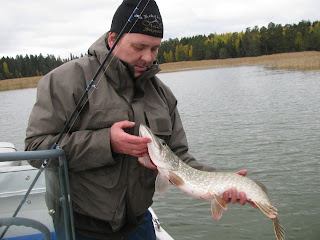 So now I´m allready in november with my 2010 season and the only memoriable thing was the traditional Fly VS Jerk between me and my youngest brother,it was funny and exciting and I WON!!!We both get 3 pikes each but my 6.1kg secured a vin for flies.

With a photo of the biggest catch in our competition its time to end the summary of the season 2010.It has been a very memoriable season with lots of good wonderful moments,to fish with old friends and to meet new ones.
Now there will be a pause in fishing but there will be fly-tying and lure-building and other preperings for the next season so STAY TUNED :)