Two awesome weekends behind,was there more to come ?
A question that was in doubt while I was driving to the shore early in the morning,it was cold and very foggy at the moment but forecasts had promised a warm,sunny day with a wind 0 m/s and as a cherry on the cake water level was about -30 cm so you could easily say that all odds was against me.
As usual,when I hit the water it was pitch black,wanted to reach my first spot before sunrise because I had a feeling the day could only turn worse after that. 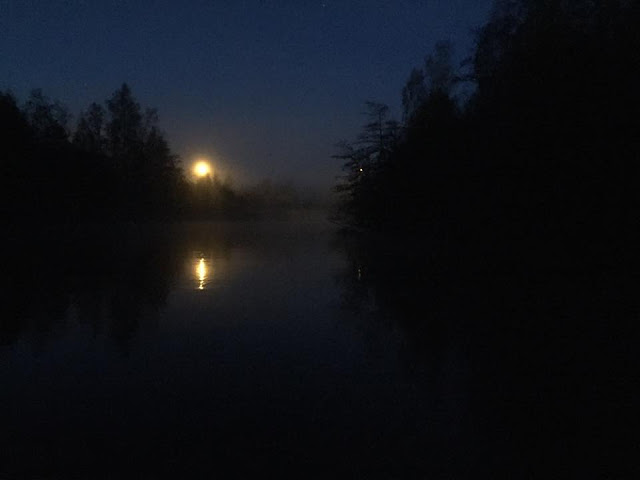 This time I came a bit late to my first spot,not that I was lazy but I just had to stop for some pics.
Have said it before and have to say again,I'm stunned over the beauty of mother nature,I feel privileged and lucky to be a part of these views. 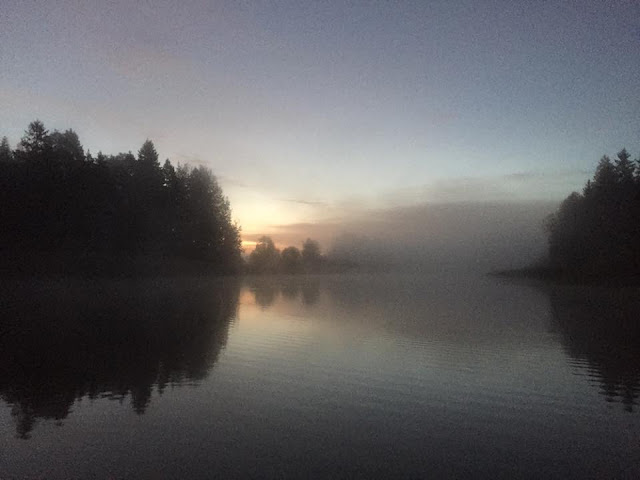 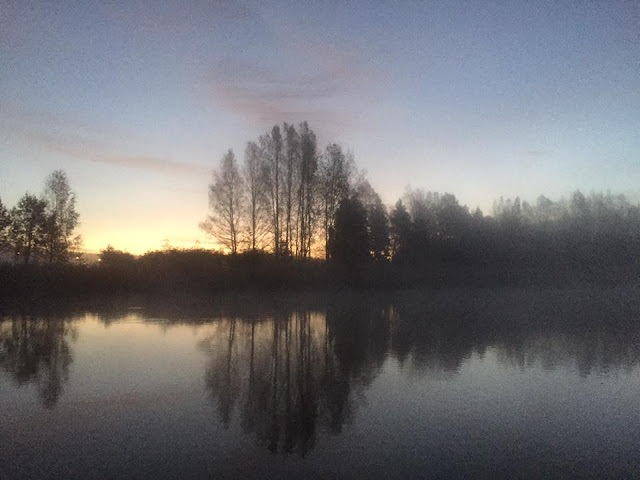 Well,I was a bit late but it was still dark and some haze when I arrived to first fishing spot.
Feel kinda strange to cast when you don't see the fly well but here the noise it makes in casts.Anyway,not many casts before I had my first fish landed,a nice fish,maybe three to four kilos,a good start. 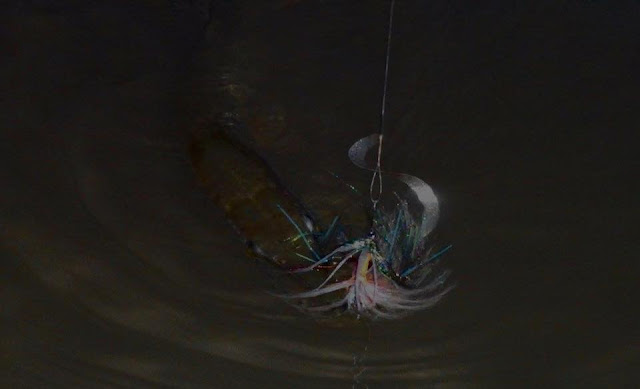 It's amazing how quick the daylight roll over you,felt like no time when darkness was gone,but it was still very foggy so I believed in my chances to get some fishes landed. 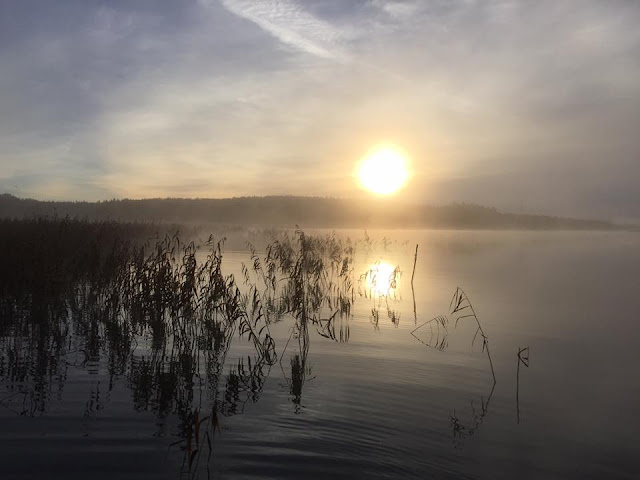 Love the photo above.
Anyway,it felt like nature woke up with the sunrise and soon you could see some awesome jumps when pikes attacked those huge baitfish schools  while they were feeding from surface.
It made also my "job" easier to locate the pikes.
For some reason pikes seemed to be a bit picky compared to other times I made this kind of fishing,but with patience I finally managed to land something. 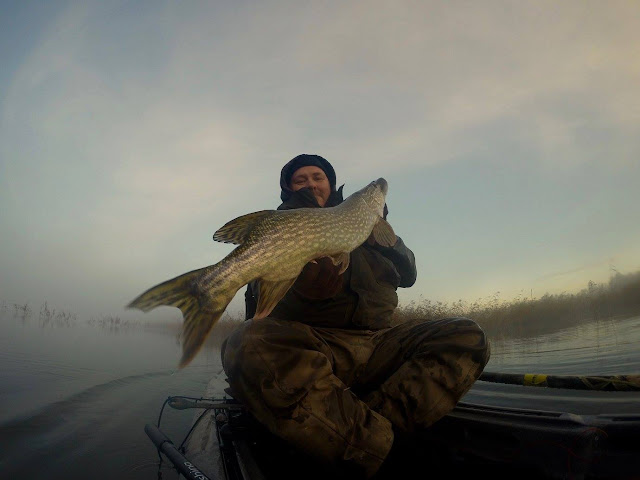 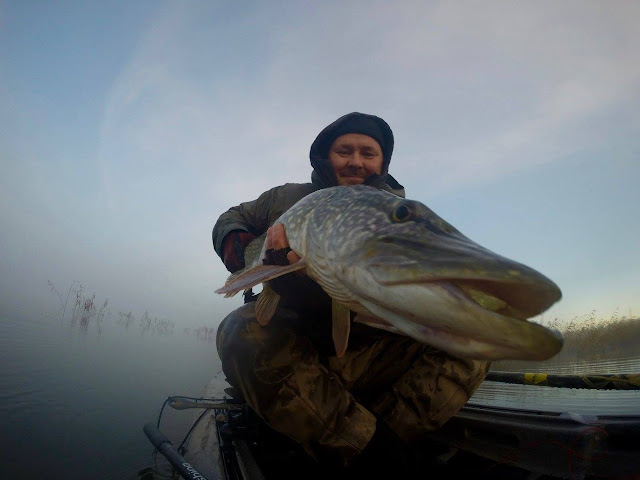 I could have fish here for some time but wanted to move on to my final destination.
On my way there I almost shit my pants.
You know the feeling when it's calm and quite and you slowly paddling and enjoying all surroundings.
That's what I was doing when I suddenly heard a massive rumble among the reeds,oh fuck,it was close to me..WTF is happening ? felt scary..for real.Before I reacted anymore a DEER rumbling from the reeds just in front of me straight to the water,hard to say who was frightened more,me or him but anyway he started to swim across the bay while I was to find right frequency to my heartbeating.
Was so " in shock" I didn't dig my camera from the bag but at least I took a pic with my phone. 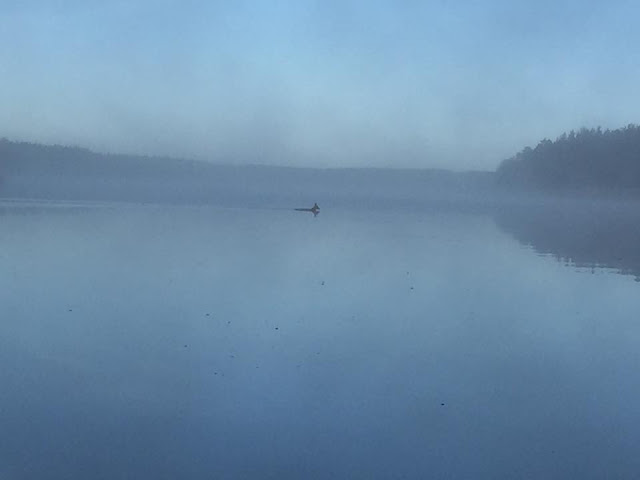 Shame on the quality but it all happen so quick.
Even the fog was almost gone before I arrived to my planned fishing area and I expected fishing to be extremely slow but I was wrong,well sort of......
I had a outstanding couple of hours and landed a lot of fishes,some very good sized too. 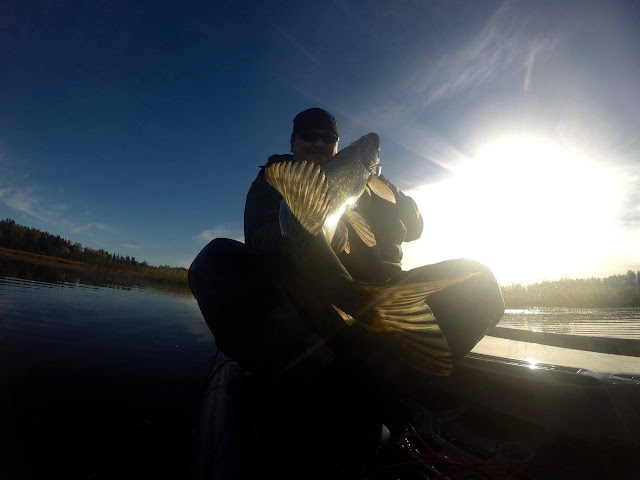 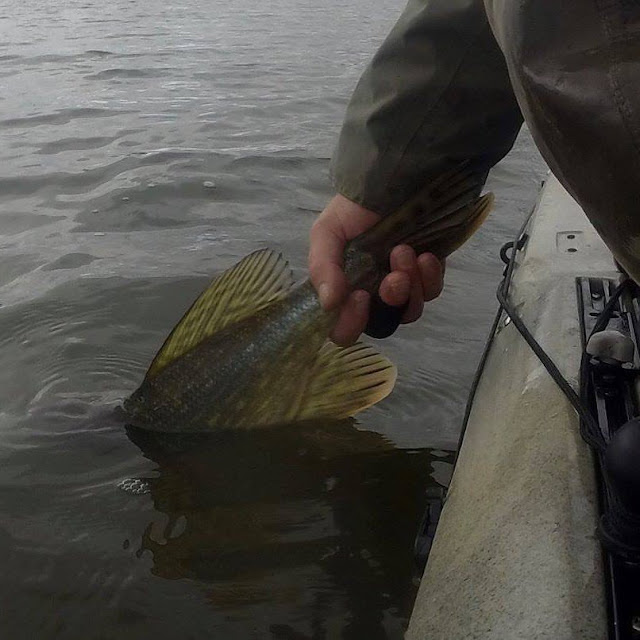 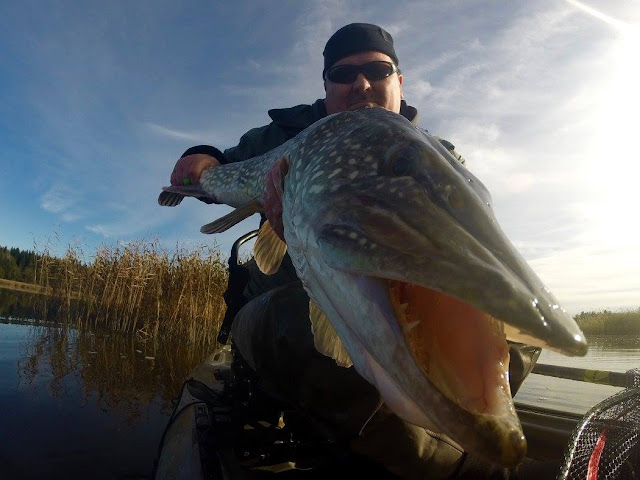 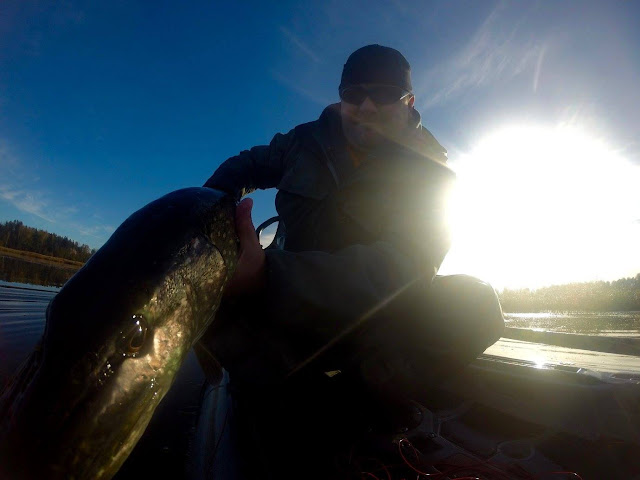 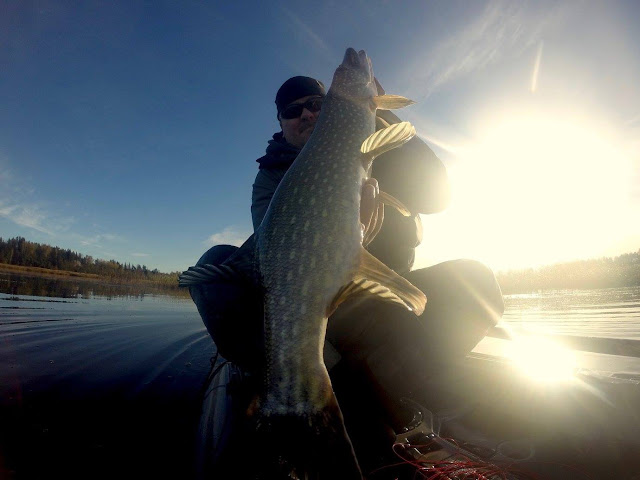 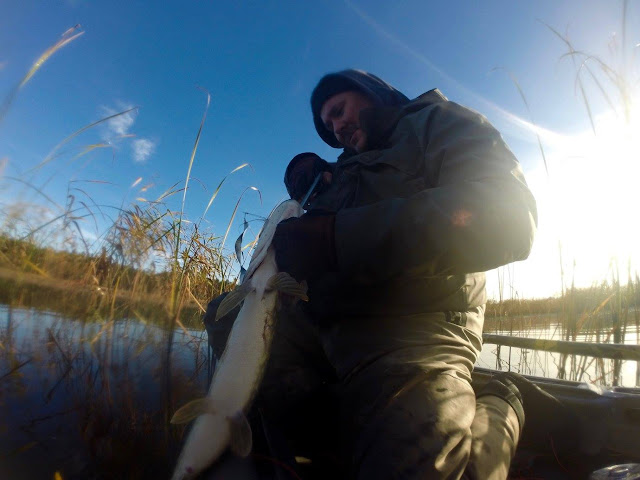 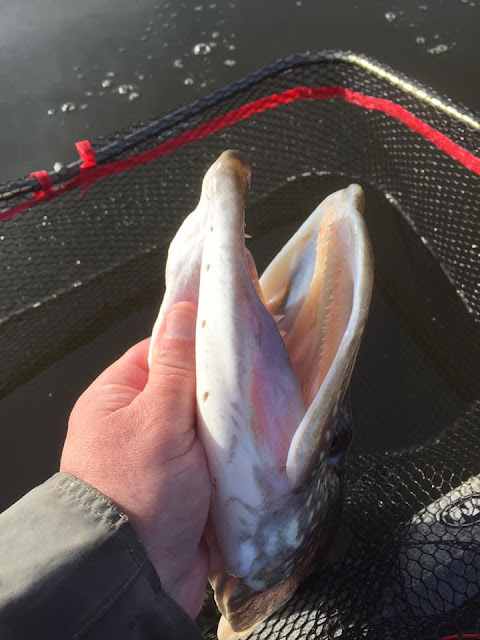 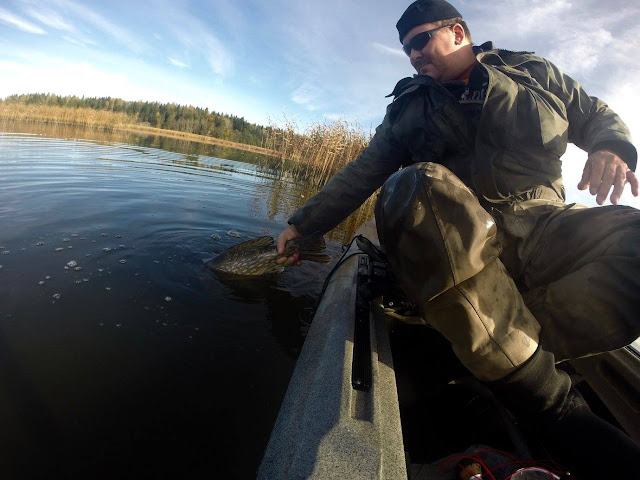 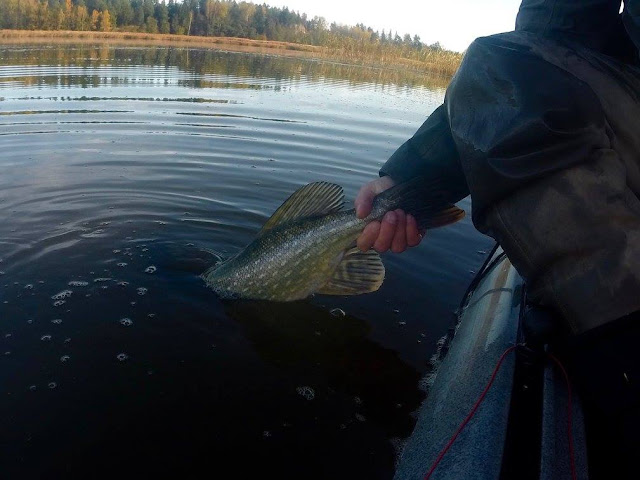 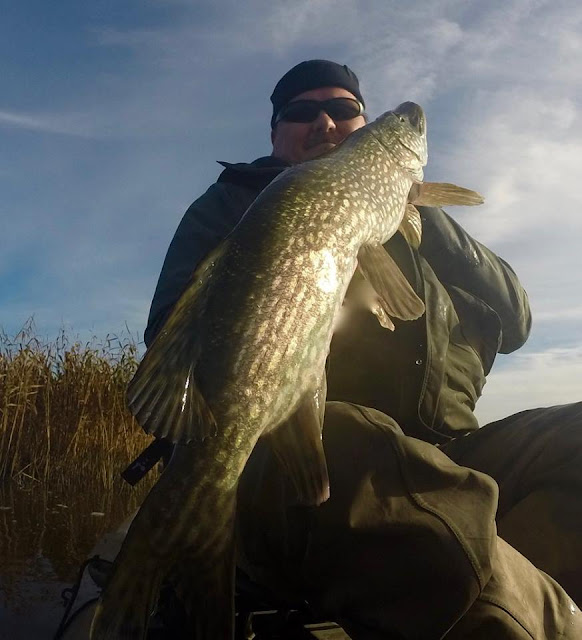 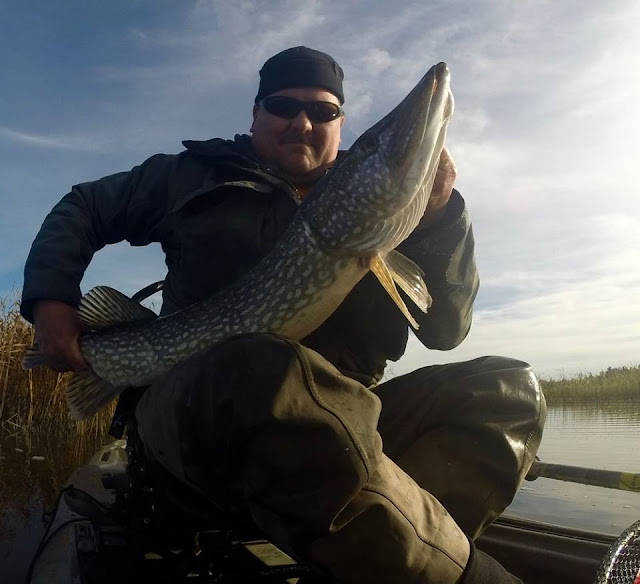 After the sunrise fishing went slower and slower,landed a fish now and then but also the size went smaller 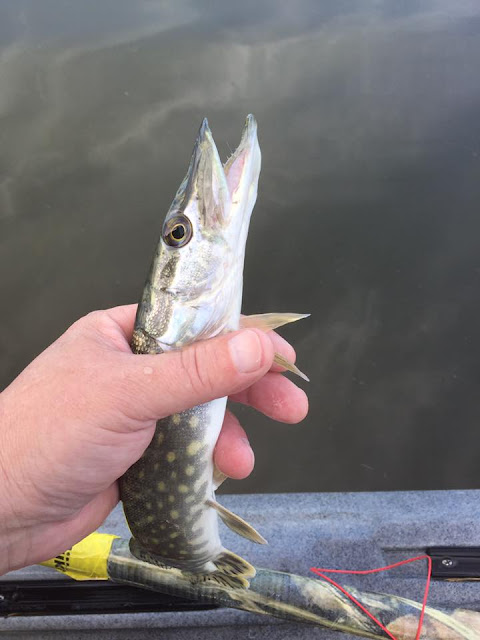 I was out for about ten hours and landed 26 pikes which is a good amount imo and even if fishing was kinda slow in late hours of my day I couldn't be anything but happy when I arrived home.
Lähettänyt Unknown klo 11.31