this date will be remarkable for some reasons,first of all,it was definitely last trip for season 2013,mixed up feelings with that,I mean..season 2014 continues 1 of January so only four days after 2013 ends,does it make any sense ? well,who really care,about starts and ends,nice to be able to fish.

I rather remember this trip for the second reason because it was one of my best ever.
woke up before 6 am so for once I was in time at the shore.In fact I was there so early  it was dark as in Batmans cave so I really took my time to load up my gear,even if there's not many boats out this time of year You will always end up in second place if you collied with a boat so I wanted at least some daylight before I was going to push out my battleship.
Have launched my kayak several times from this place so I saw immediately that even if the wind was strong it came slightly from a bit different direction than last time which meant I was able to get to that bay I had study from the map for a time already and often drive past it with my boat,I was pretty excited.
Had my kayak ready at shore,had changed my clothes including my new "lucky hat",fishing gear was ready so I had some time to think about what fly to use.
decided to go big immediately and ended up with a bream pattern I tied just a day before. 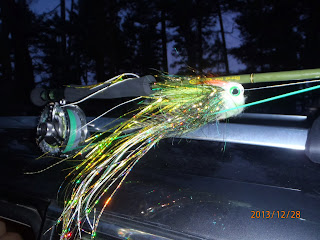 38 cm of ass kicker.
Couldn't wait no longer so I jumped in my kayak and I would have wanted to stay at some nearer places I resisted the temptation to do so and paddled straight to that bay I had in mind.
A very tough trip to paddle I have to say but I was SOOOOO pleased when my battleship slowly glided in to position at dawn.

I rested a while after that paddling,put everything ready for use,pliers,hook out pliers and my landing net,now it was time for my first cast,felt a bit bit strange because of the darkness,I didn't see the fly at all but who care,there was somebody else who saw it :) 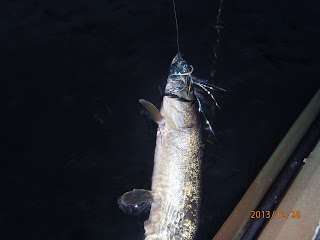 A good start.and there was more to come.
Had some daylight even if it still was dark outside,bright enough to see a big splash when a slightly bigger mama attacked my "bream" and we had a fight on.surprisingly much energy in these pikes caught lately even if the water temp is no more then maybe 3-4 degrees celsius.anyway,couples of minutes later I managed to land her and was pleased when she posed with me like this. 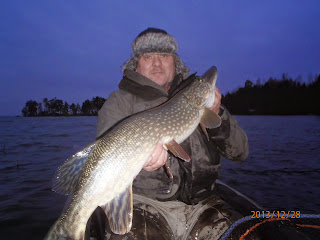 After this fish I just sit and enjoyed a cup of coffee and think of my next move.
Decided to continue with same fly at same place and after two small jacks I once again felt a better hit at the other end of the line,and without more talking I posed with the second mam. 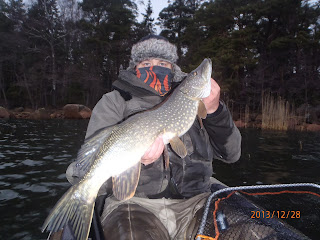 must be my lucky day :)
After this one I fished this spot for a while without more contacts so moved a bit but only 15-20 meters and immediately I had jack after jack landed,five or six in a row at best but felt it unnecessary to tease this small ones more and moved again 15 meters.

At this spot I just had to change the fly because of a massive amount of reed just under the surface and my bream was tangled in them almost  every cast,I choose my reliable color combo. 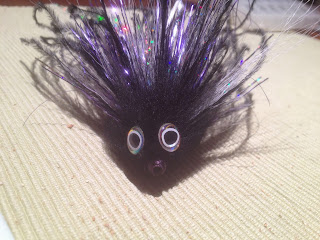 A pattern that is perfect for a place like this and not many casts before it started to deliver fish after fish and also some better ones like this for example. 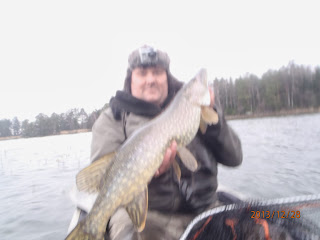 Fished for a while with many small fishes.
Landed something between 30-40 pikes with some really beautiful mam's.Used only five flies at the whole day,no need for more if you only choose the right ones :)))

Anyway,I didn't fish places on my way back,had so good feeling about this season ender that I didn't wanted to risk that of blanking a spot.
from here it's really good to go to 2014 season.
Lähettänyt Unknown klo 20.21