Well,what can I say ? Last time I wrote it was about my season over.Guess what,it's not because we have had temps up to 8 degrees and there's still open water so even if the forecasts promise -4 degrees,it also will be sunny and acceptable wind that should be lying around 3-6 m/s so I packed my floating tube in the back of my car and some light setup too.
My new Vision Big Daddy with a foam grip will be combined with a slow intermediate line and a handful of flies will hopefully do the job. 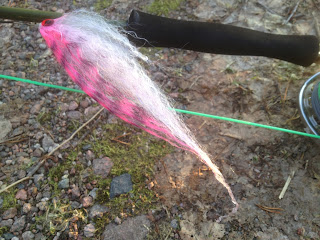 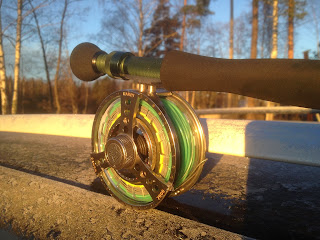 Went to shore at 7.30 am,air temp -6 degrees,a small breeze made it felt much colder.Water level was about  +1 meter.
Major notice was that  the shoreline was open but only 2-3 meter out and there was a fifteen meter wide frozen slice before open water and as I couldn't see it melting quickly or that I was able to go trough it I had no choice then to find another place to launch my tube. 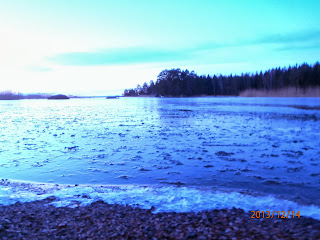 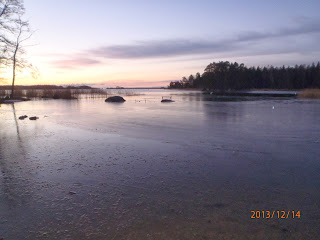 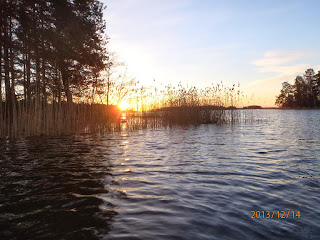 Drove around for a while and finally found a place with open water and quickly changed my clothes and pumped up my tube and went out in the freezing water.
Normally it would have been annoying to see that ice blanket lying all the way on the shoreline but it was nice now,I was at some kind of extra time when I once thought my season would be over,but here I was,laying out some line. 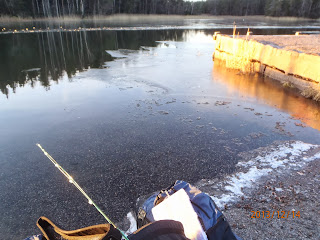 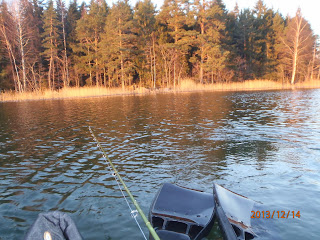 I let my tube go with the flow,making casts closest to shore I could make,every 8-10 casts and I had remove the ice from the line guides. 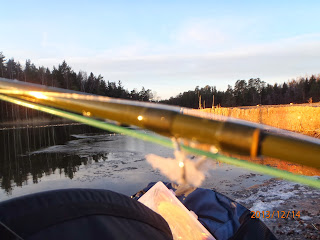 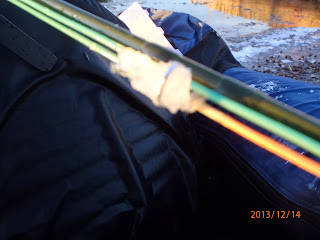 Frozen line guides wasn't the biggest issue,but a leaking pontoon was close to it.had to go back and get the pump with me.
Once again I let the flow take care of direction and made casts while I was drifting.
Landed my first fish on a place I had already drifted trough,nice....
I was enjoying my life now,sun came up and warmed up the air a bit,and Thought it was time to go for a Orange/ Red fly instead of the Pink/White starter,and not many casts before it payed of in a form of a biggest fish of the day,still a small jack around two maybe two and half kilo.
Now it was once again time to clean my line guides and to pump some air in the leaking pontoon.
Had some problem to get my way through the ice to a small islet but with some PERKELE and SAATANA I managed to get my feet hit the ground and decided also to have a sandwich and coffee.
Of some reason I didn't felt too comfortable.
The reason was that fuckin pontoon,why the hell didn't I take my kayak instead,warmer….faster….more gear…
Sun started to shine while I tried to get that frozen pump to work,I didn't managed to add much air so I decided to end this trip here.
With very little air in one pontoon I started to kick myself back to shore,casted some casts and surprisingly managed to land a small bugger,look like the sunshine activated pikes a bit but unfortunately I  had to think of my own safety so went back to the shore and packed my car and went home.
Good news is that our always reliable forecasts promise temps up to amazing +6 degrees,if that's the case you can still read about at least one trip out there for pike.Now I got some new ties in mind which need to carry out to reality.
Lähettänyt Unknown klo 20.22