Stearing at forecasts like a fool whole week and finally came Saturday when I had some plans to go out fishing again.
Last weekend I had to fish in freezin conditions but now while I was driving to the shore it was like any ordinary autumn morning,+4 degrees,a small breeze around 3-4 m/s ,cloudy and as top of all water level +1 m.
Had a good feeling when I arrive to the shore about 8.30 am and took my time to load up my gear and jumped in my kayak and started to paddle to my first spot just 200 meters away,it was a sheltered sunny place with a water depth around 1 meter.
Started all too well,third cast,first fish on a pink/white fly tied day before.
Fish for a while but no more contacts here,it might have been because gin clear shallow water and a clumsy angler padling all over that made all mam's clouse their mouths.
Moved 200 meters further to a place pretty much same looking as the first but with some wind included.
After some casts without contacts I decided to change tactics,usually in COLD water I use big flies and in FREEZY water I go for smaller flies,now I took a 40 cm copper/orange fly with black head even if the water was freezin cold.
Not many casts before I had my next one landed.Had also a better fish dropped from the trailer hook just behind my kayak.
Decided to make two more casts before paddling to my major target where I had in mind to stay for the rest of the day.
First of two..a cast close to the reed line and immediately I felt that someone attacked the fly,after some seconds I knew it was a better fish.
Cold water made the fight short and it was soon over,not a giant but a nice fish tough,or at least so nice it had to pose with me.seem to be a nice trip this one. 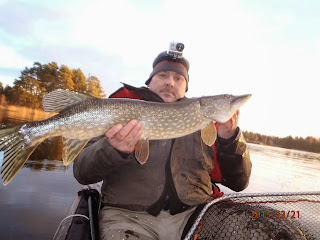 Anyway,had a huge area to fish at my next destination so I moved on,

Weather conditions was almost same as on my last location so I continued with my new favourite fly.

Of some reason I thought fishes would lay close to the shore so that's where I started to fish,
It felt a bit strange to lay your fly on places I had coffeepauses earlier this year.Landed many small pikes before I felt a train on my fly,this must be a bigger one was my thoughts after it ripped almost every inch of my line off the reel and anchored itself to the bottom.
I ripped and ripped to get her on move but honestly she moved when SHE felt for it,at some stage I remember to switch on my headcam and managed to get an epic landing on video which I will remember for probably rest of my life.
https://www.facebook.com/photo.php?v=10201307685390258&set=vb.1116437012&type=2&theater

It was awesome,pity I didn't took some decent photo of it,as u can see on the vid u don't see the fish too well,anyway,not the biggest but still a nice one and also one of the best fights I have been a part of.
The fish was so exhausted ( me too) so I didn't wanted to harm her more so I just let her recover in my net a while before I gently released her,really hope to meet her again.

Fished for a while without any contacts so I moved a bit and changed my fly to a blue/silver +40 cm now when I saw they worked.First cast,stripped the line and just when I raised my rod for a new cast a small jack jumped after the fly and I had it for some seconds before he shaked his head and disappeared into deep.
Fished for maybe 20 minutes at this place,changed back to copper/orange and started to land fishes again,not any big guns but some nice fishes anyway.
Once again moved a 50 meter deeper into that big bay I was at and anchored my battleship in good position to fish but first I had me some sandwiches and juice,needed some energy after all paddling and fishing.
After I had finished my "lunch" I looked in my boxes after some new fly to get into water but of
some reason I continued with that copper/orange fly which had worked so well so far.
And it continued to work,many landed pikes and also couple of dropped fishes.
Among these all fishes I had also this beauty landed so no wonder I had a big smile on my face while I was paddling back to the shore,packed my car and drove home. 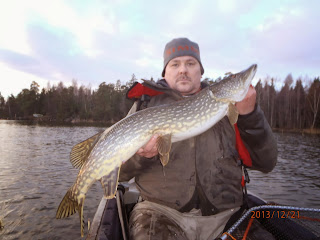 Probably not the last trip of the season,even if I would be happy if I could end my season after a trip like this.