Vacation is on and I desperately wanted to fulfill  a plan of go fishing to my childhood places were I fished for first time in my life.
Had study the map and drove with my car around to find a place to launch my kayak from and after a while I had everything sorted out so early on Monday morning I started my adventure which I had waited for for a long time now was about to start.
5.15 am my tour started. 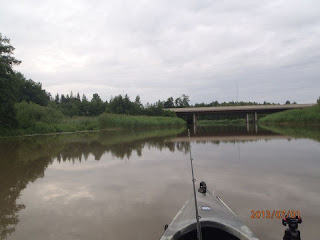 As you can see on the photo above there was potential fishing area right from the start and even if the water was murky I every now and then made some casting but without any results.
After half an hour I arrived to a wider place on this river which was some kind of a graveyard for some old ships.
I forgot to fish for a while and paddled around these wrecks,very interesting in my opinion. 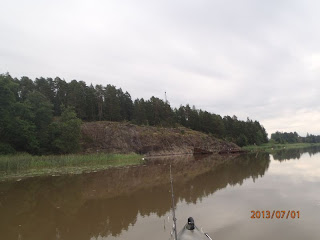 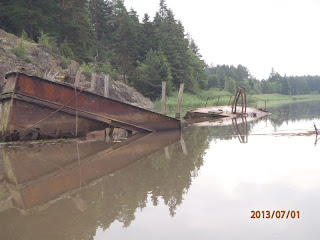 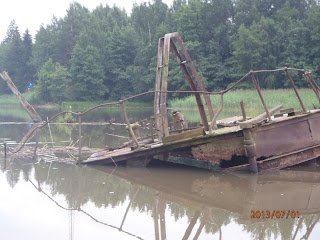 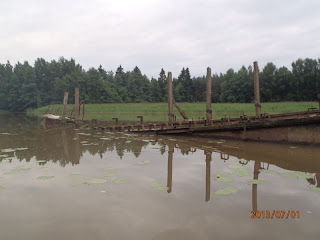 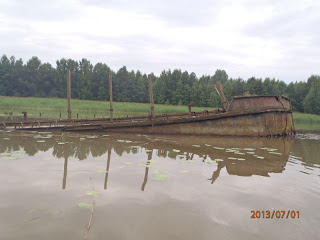 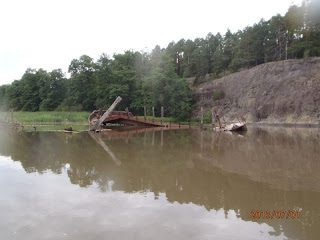 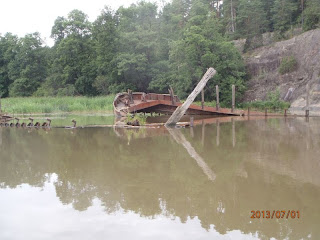 Spent here a while wondering why these ships were left here,anyway it must be a long time ago looking at the condition of them.
The first river section was about 5 Km long with good looking fishingspots  but not until the end of it were there was a open area I was able to land my first river pike,a very small one but...a pike is a pike and the game was on .

Paddled to the start of the second river section and let the boat slowly drift along the river when I suddenly drifted over a deep pit and what did I see in my echo sounder. 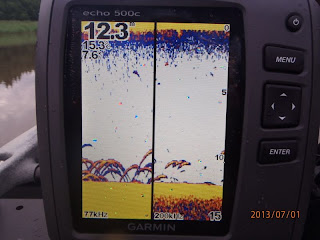 Big fish.Drifted a bit away and throw the anchor and started to cast into that pit and with my third cast I felt a heavy hit but dropped it after just two,maybe three seconds and after that,nothing.
Tried different tricks but nothing seemed to help so I decided to give up and go on.
Drifted along and fished and took some photos too,this is an "must" place later on autumn,only thing that this is an hours paddling away from the dock and even if it smells pike this place did not have any evidences  yet. 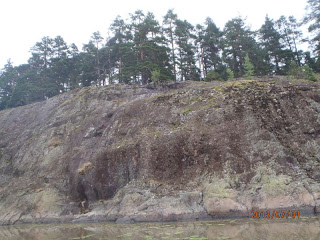 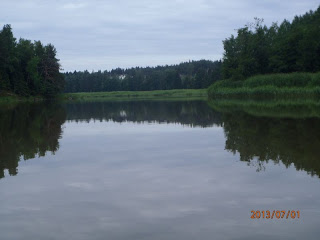 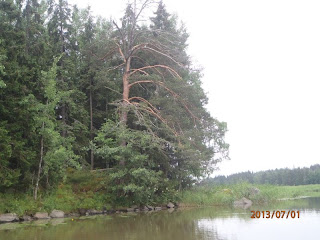 A minute after I took the photo above I felt a hit on my spinnerbait and knew it was a slightly better sized  fish and I wasn't gonna drop this one and after a couple of minutes I landed a nice madam and had a chance to test my new camera mounting. 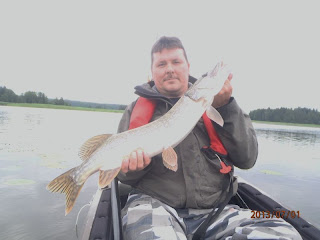 Not the best quality but I'm sure you can see what it's all about :)
Still need some adjustments.
Anyway,drifted further and further from the dock and closer and closer for my final destination.Landed a fish every now and then,took some photos more. 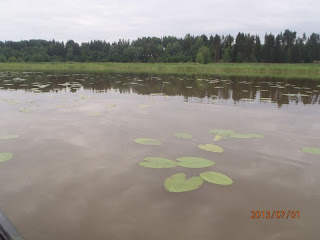 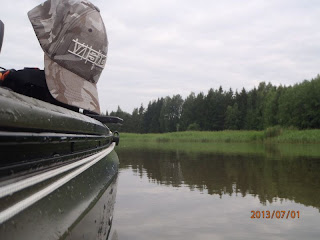 I found a large or should I say huge area one to two meter deep with a lot of Lily pads,and a lot of pikes too.
Landed several pikes here,all of them XS or S sized,it was a bit difficult to get a "clean run" but almost every time you managed to do so you caught a pike.Very interesting place. 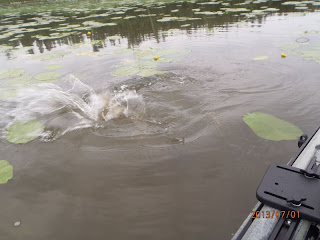 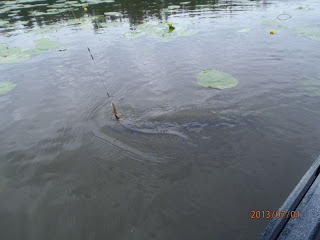 The clock was ticking and a quick check on my GPS showed me it was not a long way to go anymore and finally after a small islet I saw a familiar sight that I still remember even if it was a long time since I last saw it. 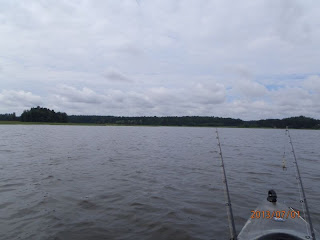 It was a pretty emotional moment paddling closer to that bay were I fished for first time in my life and spent so many years fishing with my dad.
When I went to the bay I took some time to just paddling around while taking photos,and living up to old,very old memories.
Decided to anchoring for a while to have something to bite.
Here is some photos from a bay that was a awesome fishing area for me when i was a child. 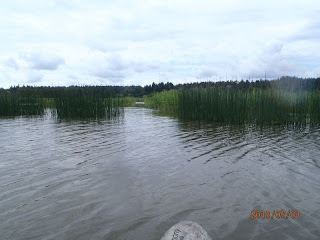 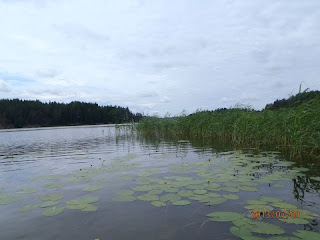 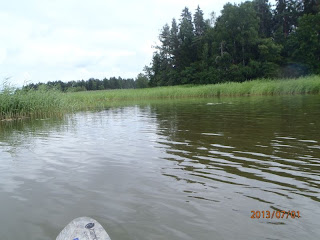 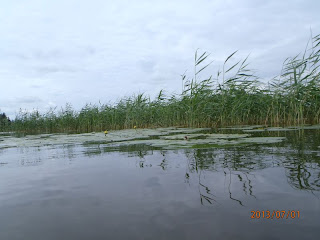 And of course coming from so far and after such a long time back here there has to be some fishing too.
Could not remember the best places anymore so I just had to try my luck,and after some dropped fishes I finally manged to land a small bugger.
Yes,a small one but this one got a special place in my heart.
Here it is,a shitty photo but a pike caught on same hoods I caught my very first pike for over
40 YEARS AGO !!! 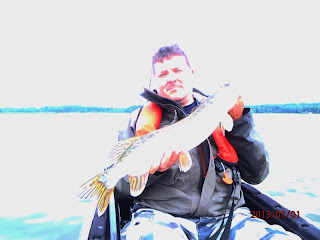 Everything end at some time so even this nice adventure,paddling back,caught some fishes,took some photos but my mind was somewhere else.
Went back to the dock 8.15 pm,fifteen hours and 33 km:s later,was exhausted but happy and felt very relaxed.
Not sure if I ever will be back here,feel like this was kinda trip I just wanna do once,but we'll see.
Lähettänyt Unknown klo 11.11