After my last 33 km long paddling i had aching feet and neck and also shoulders so I wasn't out on water before around 10 am and when I came to the shore I noticed a very strong wind but after all driving here i decided to  give it a try anyway.
Immediately after I paddled out from that sheltered bay I met the rage of the sea in form of that wind and big waves,for my kayak those waves were huge,liters of water splashed in my kayak and I was on my way to give up but managed to paddle behind an small islet to think about my next move.
I didn't dare go on paddling further on to any good spots so nothing else to do then to start looking for some fishes from where I was.
After two and a half hour fishing this same small area was a bit annoying so I decided to move on,if the wind would be too strong I would give up and paddle back to the dock with help of a massive tailwind.
And as I feared I had not a slightest chance to go on so I just changed course and gave up,nothing more to tell you about this short trip.

Next day I woke up a bit earlier and a after some breakfast into the car and a hours drive and launched my kayak and out on the water.
A light breeze,sunshine,some clouds on the sky made my feelings a bit mixed,not a fishing weather in any meaning but I have had some tremendous fishing sessions in these weather conditions  so I felt pretty reliant.

On my way to the first planned spot I decided to spent some time close to a range of rocks,just for fun actually but after about fifteen minutes I had landed just one XS-sized bugger so I decided to go on to my first planned spot.
It could not have started better,first cast and fish on,a small one but you know....a planned place,first cast...fish on,it simply taste good. 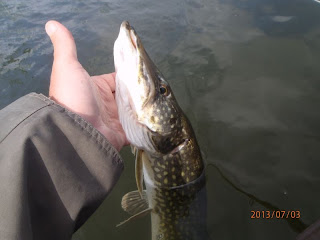 Fished this spot for a while with a feeling this place could hide some surprises but after a while I decided to go on but also planned to stop here on my way back to the dock.
Paddled to the shore of a small islet and eat some sandwiches and continued with fishing,also some photos of both fishes and landscapes. 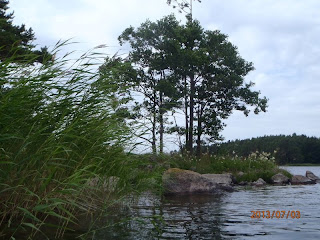 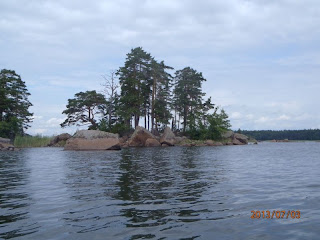 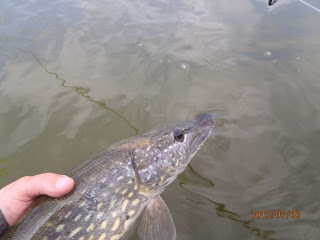 While I was paddling a little bit longer trip from a spot to another my thoughts went couple of weeks back when I landed two +100 cm fishes,oh man it would be nice to feel that heavy hit again,but it was time to stop daydreaming and get back to reality.
Once again,first cast,fish on but I dropped it just behind the kayak,no matter it was a small one anyway.
Let my kayak drift slowly along the reed line made some casts when suddenly BAM,a really heavy attack and I knew this was a way better size fish then the other caught today,it was a short but intensive fight,and when the pike was to surrender I thought it might be better using a landing net instead of a chingrip to be able to release the fish in the water due to the watertemp.
Made some new adjustments on my camera yesterday and this was a good chance to test it again.
here's the result. 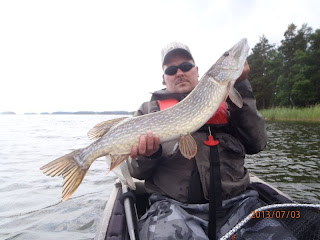 104 cm:s pure steel in form of a nice summer pike.
It was good to end this day here,didn't even stop at my first spot anymore.
Lähettänyt Unknown klo 14.32