Had a BAD week at work including flagging on Saturday so my brother Janne had a easy gig to persuade me for a daytrip to Lovisa on Sunday.
The weather wasn´t once again the best for fishing but who cares,it was nice to get away from the noisy city anyway.

When we came to the first spot I instead of fishing just listened to to the silence,it was amazing,only a couple of seagulls had their noice somwhere far away.
After my breakfast including sandwiches and a lot of coffee it was time to piece together my rod for todays fishing,I had choosed my Hardy Zane and for my line I decided to start with RIO Scandinavian pike int/sink 3.
Sink 3 because I also had deciced to fish only with my new tubes wich are very light and were we fished was a depth of 2-3 meters so no need for int or floating line.
The water also felt warm so there was no need for too slow line stripping.

Contrary to our expectations our...well...at least mine started well landed a almost 4 kilos and with next cast one around 2 kilos while my brother lost two fishes.

After the sun started to shine the fishing went harder and harder,some VERY small pikes was landed by me but my brother had not a single hit for hours.
There was pikes following my fly but they did not attack them.

Well after many hours my brother dropped the monkey off his back with a monster pike around 300-500 gramms. 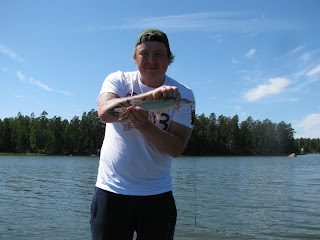 Went home around 7.30pm and summa summarum of almost twelve hours fishing was 11 landed fishes a lot of dropped fishes and a bad sunburn but at least I felt rested and happy.
I also made some notice of my equipments,My RIO line is very messy,dont know why but I dont remember how many times I had a million knots to solve out,Visions Big Daddy is a serious contender.
Next thing is about my flies,got an idea how to make these flies better,will show you as soon as i have time to tie some.
Lähettänyt Unknown klo 20.41