Went with my daughter to our cottage late on Friday evening.
We were both very tired so we decided not to go out fishing on Friday,instead we eat some good food and play games for a while before it was time to go to bed.
I woke up early on Saturday morning and look out from the window and noticed a small breeze and heavy rain,well who cares?

While I was eating my breakfast my daughter also woke up and after we finished our breakfast we went out to the sea to do some pikehunt.
Very soon we found out that it would be difficult to get some fishes at all.The wind started to blow harder and the rain went heavier and heavier and after a couple of hours we decided to give up,at least my daughter succeed to land a small one,I had not a single hit on my fly.
When we arrived to our cottage we were both very hungry and on today´s menu was Hamburgers and french fries with Coke. 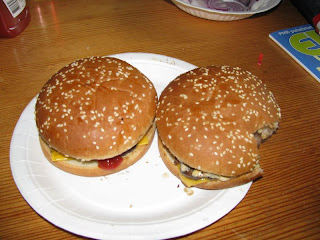 After that meal my daughter went to fish from the shore and I just had to take a nap.
My "nap" last for five!!! hours but belive me,it felt good.
After some cups of coffee It was time to make a new try out on the sea.
Now my daughter decided not to come with me,it was her time to take a nap.

The rain had stopped but the wind was around 8-10 m/s so I had to find a sheltered place to fish.
After I studied the map I made my decision were to fish.
even if it was a sheltered bay the wind blew pretty hard anyway but there was nothing I could do about it right now.
As I told you some days ago I bought me anew line and I decided to give it a try right now.
The line was ment to my Vision GT4 rod and of course I had forgot to take it with me.
Nothing to do to that either so I grabbed my Guideline LPXe rod and start to fish with that instead.
Even if the line wasn´t perfect for that rod it felt good to cast with such a heavy line in that wind,to be honest the wind hardly disturbed me at all.

The water level was high,the wind broke the surface and I was on place were I usually get fish so I had a good feeling about this evening.
Not too long before the first little bugger came to say hello to my black/red Regret fly. 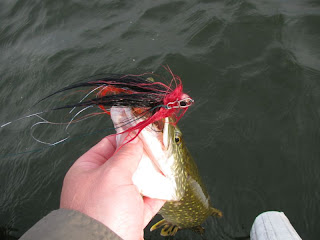 Two more casts and the second one also wanted to meet my Regret fly. 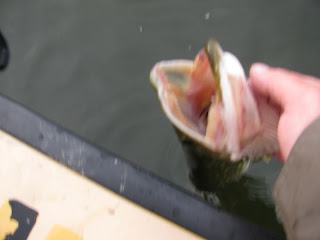 After these two fishes my black/red Regret stopped to deliver more fishes and I started to change colours after every five casts.
And while I was just fishing without any pressure the sun decided to show some light between the clouds.
Next cast after the sun started to shine I had my third fish at the other end of my line,It felt a little bit bigger/stronger than the two others. 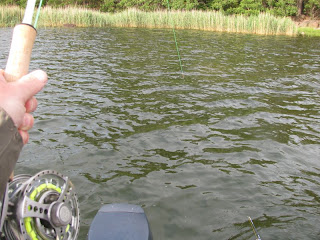 Anyway,had no problems to land this either even if it tried to do some tricks like swim under the boat ETC.ETC...

Have to praise my new Baker pliers,it is so easy to release the fishes with them. 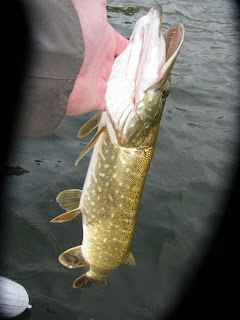 As you can see on the photo my camera has got some damage on my trips before and some photos looks small because it doesn´t always fully open the lens cover.
Anyway,after this fish I had only one hit but could not land the fish so After a cup of coffee I went back to my cottage and after some sauna it was again time to sleep.

Woke up 5.30 am and went immediately out on the sea.
The water level had dropped at least 35 cm:s so even before I get in the boat I knew it´s going to be tough and how right I was,3 hours fishing ,changing colour,size,done all tricks I know but not a single hit was the result of this mornings session.

At least I took some photos of the waters I fish in,as you can see you have to know where you can ride with your boat,if the water level is normal many of these rocks are just under the surface. 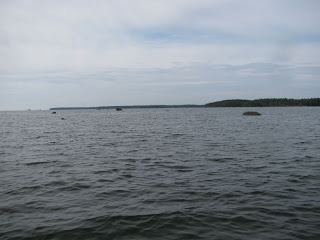 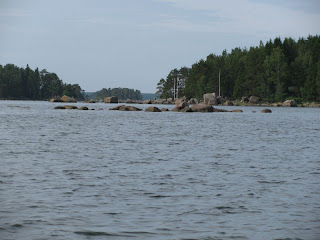 Went back to my cottage and made some coffee and sandwiches and went down to the shore to have my breakfast and just relaxed before it was time to once again drive home to that noisy city.... 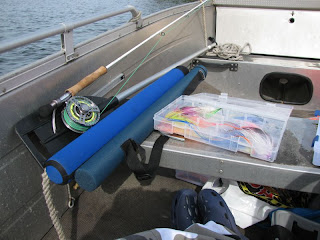