A story of a piece of wood that become a lure

Nothing revolutionary,just want to show you how I built a lure.
I haven´t had time to built lures as much that I want because I use to built them in my Mom´s garage but when she died two years ago we sold her house and suddenly I had no place to build them.
As my youngest brother also build lures we were two to share that problem,he works as a teacher and he ask the principal if it would be okay to use the woodwork classroom to our hobby and it was okay but of course I cant be there by my own so I just build these lures when it suites my brother(no offence).

As I have told you my stuff is ready for the opener but as usual my brother just woke up from his hibernation and now he´s spending all his leisure at school now.
I have been there now and then keeping him company and built something myself too,like this piece of wood that has sanded round and has taken the fist step to became a lure. 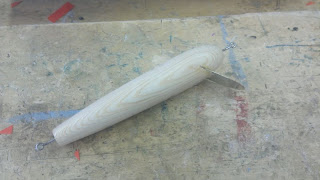 To make a lure that wiggling walk I use to put some weight here and there and then cover the rest of the holes. 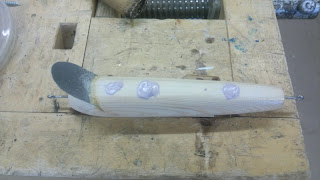 Then it´s time for 5-6 times varnish until you get a good looking surface. 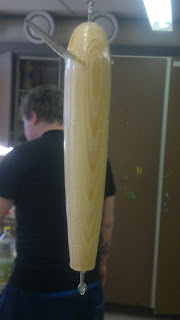 Then choose your colours and let the airbrush sing.... 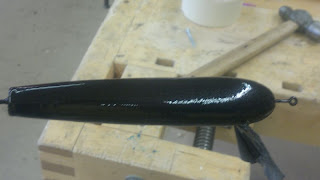 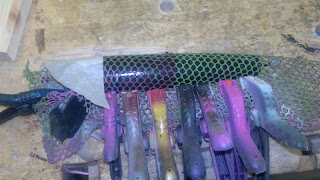 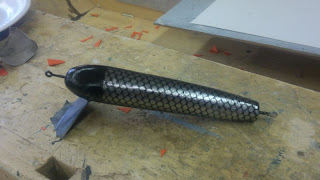 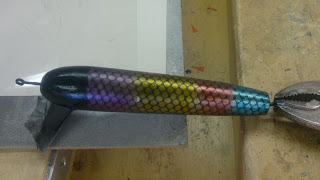 Now when it has some clothes on it´s time for some varnish again,3-5 times should be enough,then it´s just some small finishing (if you want to). 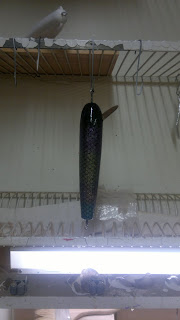 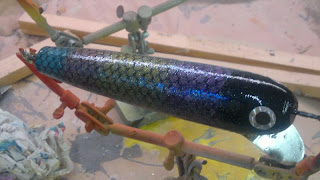 And finally a photo of a piece of wood that hopefully will do what I have planned it to do.
Just add some hooks before you throw it to say hello to the BIIIIIG Mamas. 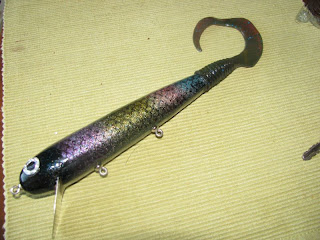