Season is turning to an end slowly so I think I could sum up and share some experiences with you of My battleship from Jackson Kayak called Big Rig.

As some of you know I have been more or less a kayak-freak for a time now and a Jackson team-member too since August and I've been an owner of the BigRig since late August. There will probably be many updates to come later on as I get more experiences.


After we finished our talks and sealed the deal with Timo from the JK distribution for Scandinavia http://www.erakettu.com/index.php?section=1 it was time to choose a battleship for me. Thanks to a friend and also JK team member Mikko's experiences and advice I also turned my sights to BigRig. Mikko, like me, also fly fishes for pike from the Big Rig. This was a huge factor why it wasn't so difficult to choose from the different models. 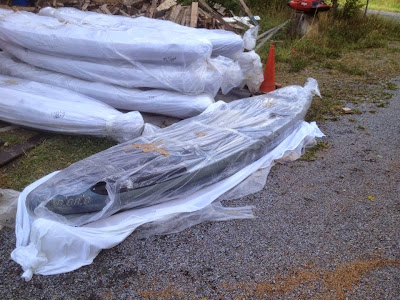 My first comment was "WOW,it is much bigger than I had thought",especially the impressive width (94 cm) was far more than in my yaks before,also this was the shortest one I've owned (401 cm) so I decided to take a rudder as an option to avoid any zig zag movements on the water. 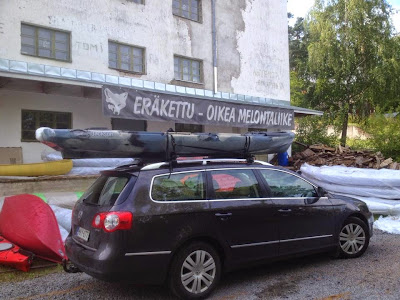 Second impression was all the little details,like the anchor solution, rod protectors/throughs for rod/reel combos on both sides of the yak and nice storage space on both ends and under the seat,definitely enough for a fly angler.
Also that "Jackson bottle" and two lureboxes, not to mention the rod holders was pretty cool gear to get with a yak.
The weight (45 kg:s) of the yak was something that concerned me a bit but after you learn some tricks it's not that difficult at all.

Got my yak on a Wednesday and days were just draaaaaaging on waiting for the weekend and the long awaited testride but finally even that day was on hand.
Weather was cloudy with the sun showing up among all the clouds but not too much wind which was good so I could concentrate on discovering this boat with no other things to worry about.
First thing at the shore was to put the seat on place,you can choose from HI or LOW position,I chose the HI position. It was like sitting on a normal chair,very easy to stand up.Secondly I adjust the lumbar support,very easy to do,I love functional solutions which are easy to use.
Because this was only a testride I had only one rod and some lures and a landing net with me instead of packing the whole yak full.
My first thought was the stability, it's incredible,first yak I dare to stand up in without any fear, not that I often stand while fishing but it's nice to know that you can do it if you want to.
Secondly I noticed that it was a bit slower than my other yaks,BUT !!! It's the price you'll have to pay for stability, I'm willing to do that, it's not that slow anyway.
As I told you I had not done any special arrangement for the yak to suit my fishing, I was pretty excited to test the original anchor rig which could be awesome with no rope in your feet .
The weather was fine when I left the shore but typically when I was as far as I had planned to go the weather quickly changed from this 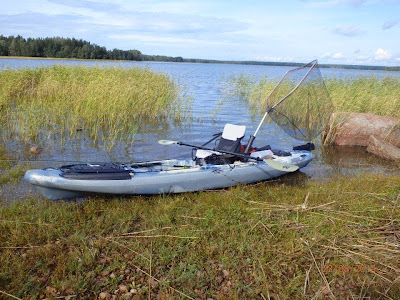 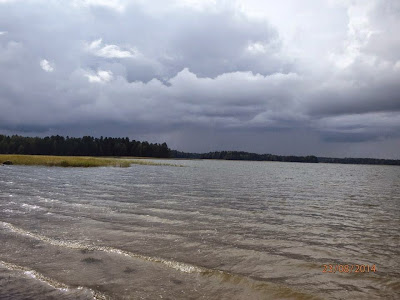 and just minutes after to this 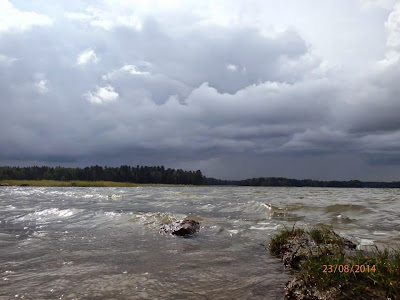 So I had the "honor" to test my ship in tough conditions immediately and even if my energy was about run out paddling against the wind I have to say there was NO PROBLEM to handle this yak, barely wet my feet, I was in love
Summa summarum of the first trip was that I noticed the incredible stability in rough conditions.The original anchor rig wasn't good,or let's say it don't suit my fishing, got several times tons of weed hanging from the anchor. For those who want their anchoring point only back this solution is genial.
So,an anchor trolley was on top of the list and I wanted this to be done properly so I installed pulleys with stainless bearings 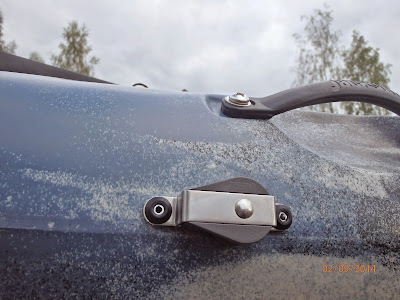 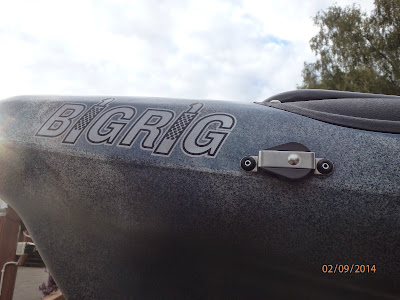 At this point I haved change the position of the pulleys and I'm very satisfied with the function of the trolley now.
My fear of tangling my fly line into the anchor rope was unnecessary, I got the rope under the seat .Got some plans to modify this solution later this winter to make the trolley even more comfortable to use

So far I have been extremely happy with my BigRig. Not much negative to say about it. Couple of things I'm extra happy with:
First of all I love the stability, it really is incredible.
Secondly I like that I can store two rod/reel setups on each side of the kayak in the rod protectors, it's very nice to have them stored like that, you can't have them in rod holders behind you due to your back casts. I have my landing net in one of the "rocket launcher" behind me anyway. 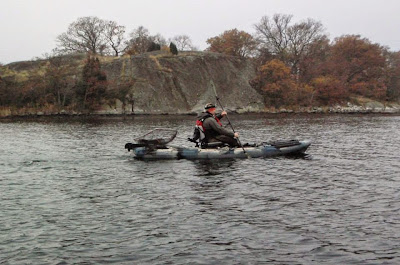 Also like the pre- mounted GoPro holder in the front of the yak. It enables you to take videos of your fishing, nice variation to the head strap mounting.
I have also mounted a rack for a normal camera in case I want to take a nice photo of a nice fish. 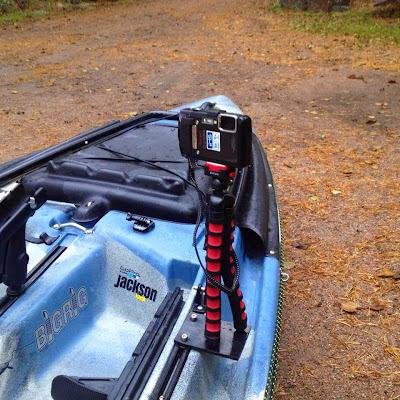 You can also see the rod tip cover on the right side of the camera and the pre-mounted rack for your GoPro camera on the left.
That rack has been awesome for me, I remember a nice fish times ago which ended in a photo like this: 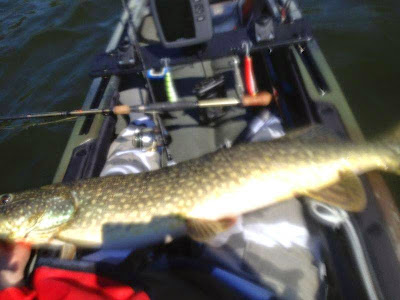 After that I wanted to do something to be able to take decent photos and I can recommend this solution to all of you who fish often alone,it's cheap and easy to work with.
At the end of the season I was fishing in Blekinge archipelago Sweden and on the second day the weather conditions were tough,maybe toughest I've ever been in.
Wind wasn't more than 11 m/s at max but the rolling waves were very big and for some minutes I was a bit afraid I will fall of the yak but it behaved so consistently I very soon forgot what kind of conditions I was in and I could concentrate fully on my fishing.
What was important for me with this experience was that I know that I can go fishing with this yak in almost any conditions in my home waters.
At this stage I want to remind you that these things I write about are NOT any kind of absolute truth,
only MY opinions.
There isn't a kayak which is best in everything, it's all up to you what attributes you appreciate and choose your kayak after that.
So,even if I think my relationship with BigRig will continue for a long time there's some things I would love to see changed
Would love to see a waterproof small storage box near the seat were you could keep your keys,phone etc,etc...
So far I have resolved it with a loose box, there's that much room under the seat.
This is my third yak and so far absolutely best for my use, it has some deficiencies but all the basics are there,and always nice to find your own solutions too to suit your own fishing.
I hope This post of my thoughts answers any questions you might have about the BigRig, I can say that if stability and space is your primery criteria, Big Rig offers them both.
Lähettänyt Unknown klo 8.30