As I wrote in my earlier post I was hoping to write something about fishing next and guess what...I'll do that.
To be honest the day wasn't very good,actually it was close to a disaster,It was raining when I left home,temp was only 1.5 degrees so it was a bit chilly but it was going to get worse.
I drove 50 km:s and almost immediately when I arrived to the shore rain turned into snow and the snowfall was heavy. 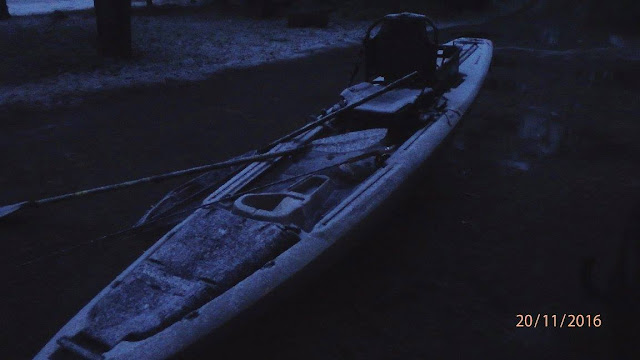 All surfaces on my yak went frozen and slippery,not a good start but hey,"No pain,no gain" so I tried to find a way out thru that slush.
I think,or at least it felt like the temp quickly sank and now raised again back to that 1.5 degrees.
First casts was a pain,my line felt kinked and stiff but after ten,fifteen minutes it was more normal again.
The snowfall was very thick now and it also filled my kayak with snow and I didn't wanted any extra weight to paddle with so I needed to empty it now and then. 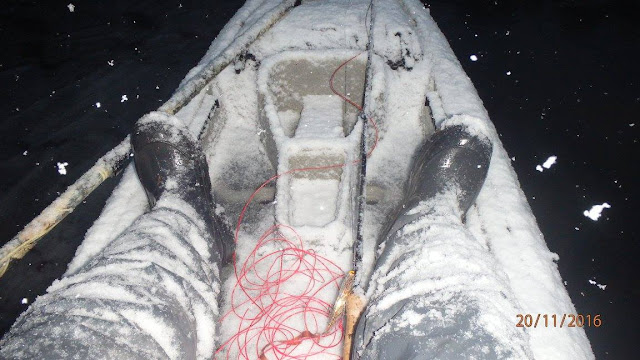 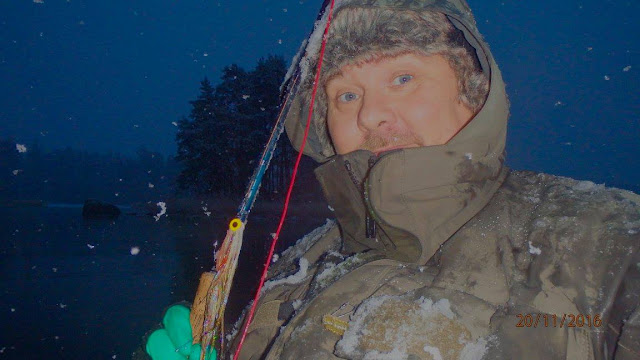 Many of my planned spots were covered with a thick layer of slush and I had some problems to get my ordinary flies to sink thru it so I used my flies with a Sculpin head instead,problems with those heavy buggers was that they don't allow long stops which are crucial in these water temps. 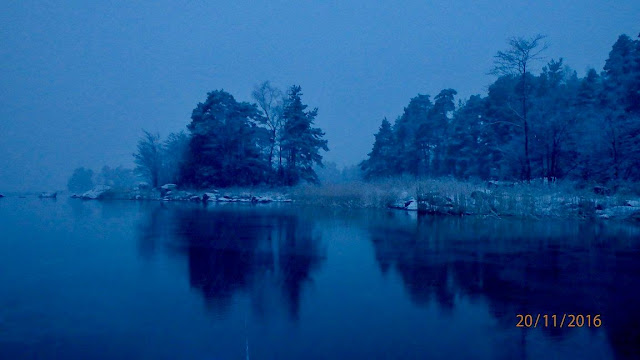 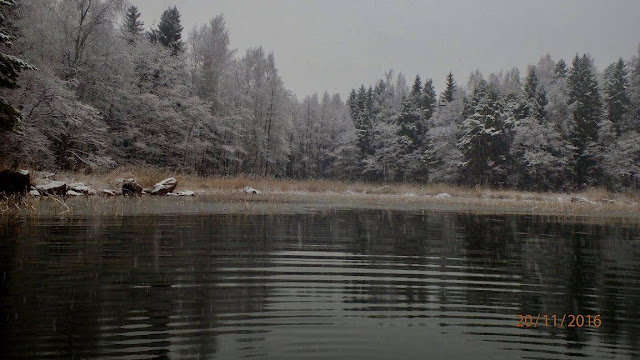 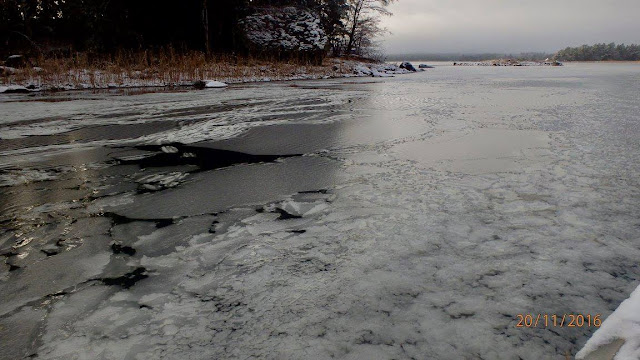 Luckily the snowfall ended at one point but many of my planned spots were impossible to fish but still managed to land  some fishes among that slush. 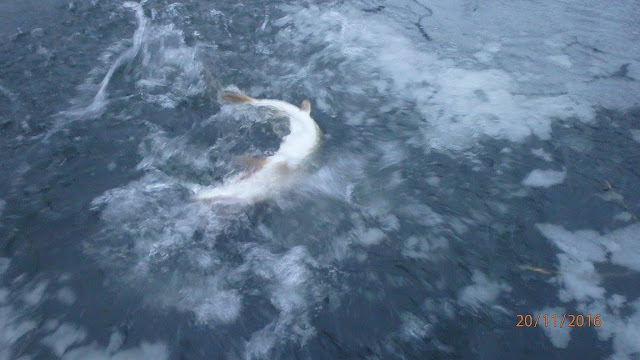 Days are so short in Autumn,you get twilight sneakin at  you at 3 pm already so a good planning before you go out save some time for fishing instead of paddling.

I learned a lesson when paddling almost 1.5 km:s to a bay just to meet this sight. 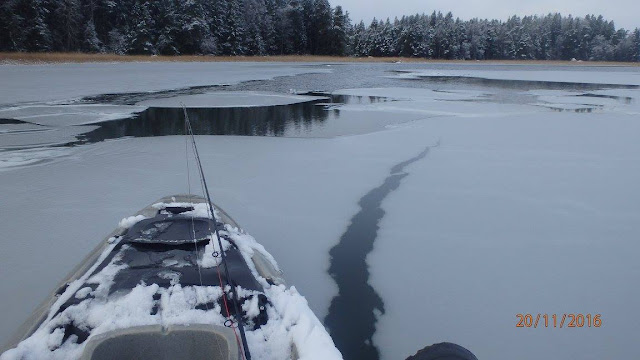 I can tell you it was frustrating.....
Clock was ticking so I  decided to start paddle back and fish couple of spots on my way.
My jacket is leaking from the neck so my back was soaked and it was chilly too so even if sunshine usually is bad for fishing it was pretty welcome this time. 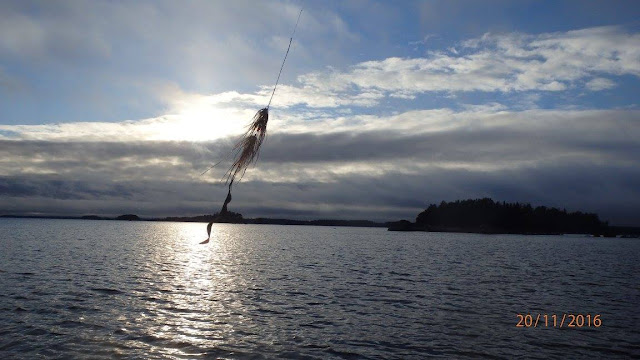 Amazing how the weather can change in just couple of hours and it didn't ruin my fishing either,actually it felt like fishes were more active now. 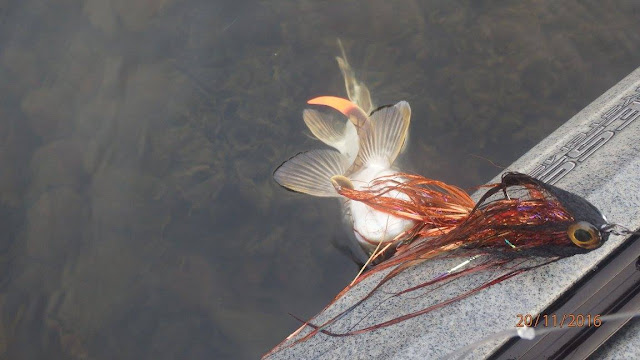 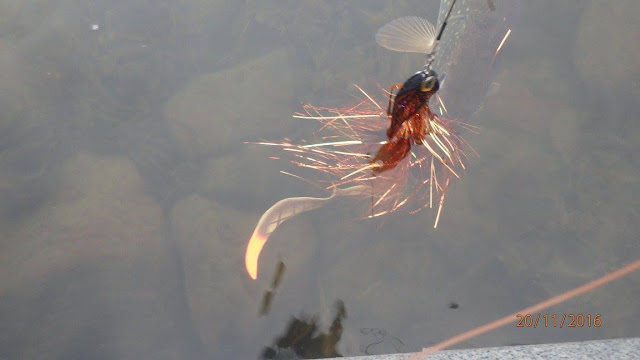 Fished this spot carefully because it was just 200 meter back to shore but as I said,clock was ticking and after 8 hours out it was time to give up before dark.

I landed six or seven fishes which isn't so much but thinking that I could not fish most of my better spots the result wasn't so bad after all,had no breaks because of the short time to fish and all catches feels good in this cold weather,you need them for a reward for frozen fingers,toes and cheeks.
Looking at forecasts now it seems like I'm gettin out next weekend too,even if the weather can change quickly as I noticed today. 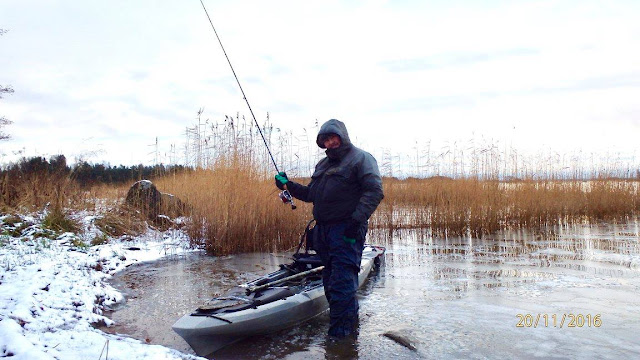