Just noticed here the other day that I haven't post much of any fly tying recently.

Even if I haven't There has been some tying,not as much as usually but think my latest flies are tied with more conception then earlier ones.

Now when I tie less flies than before I thought that I could tell you more about the flies I tie,materials why I use them etc,etc and also add some photos from middle of tying.
But those are plans of future.For this post I can only add photos of ready tied flies.
Some of these ties  are so old I don't even remember all materials been used 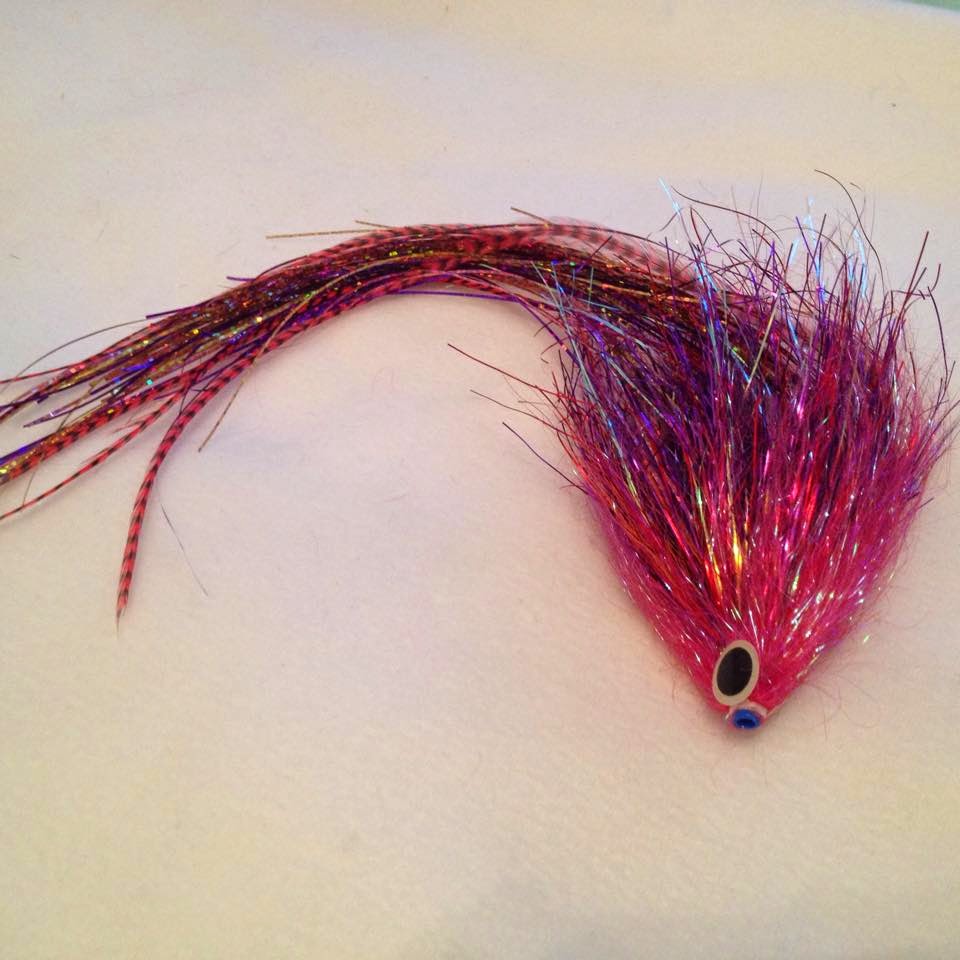 Actually I tied this fly just because I wanted to try my new "Raspberry" colored Angelina fiber on a fly.
It's tied on a blue pneumatic tube 3/5 mm.
Tied in three parts,Tail,body and head.

Body is a mix of Hedron flash in purple,teal blue,pink and pearl,tied in a loop.

Head is simply tied of Angelina fiber in raspberry color and trimmed afterward.

Funny thing is that raspberry seem more pink than raspberry in my eyes. 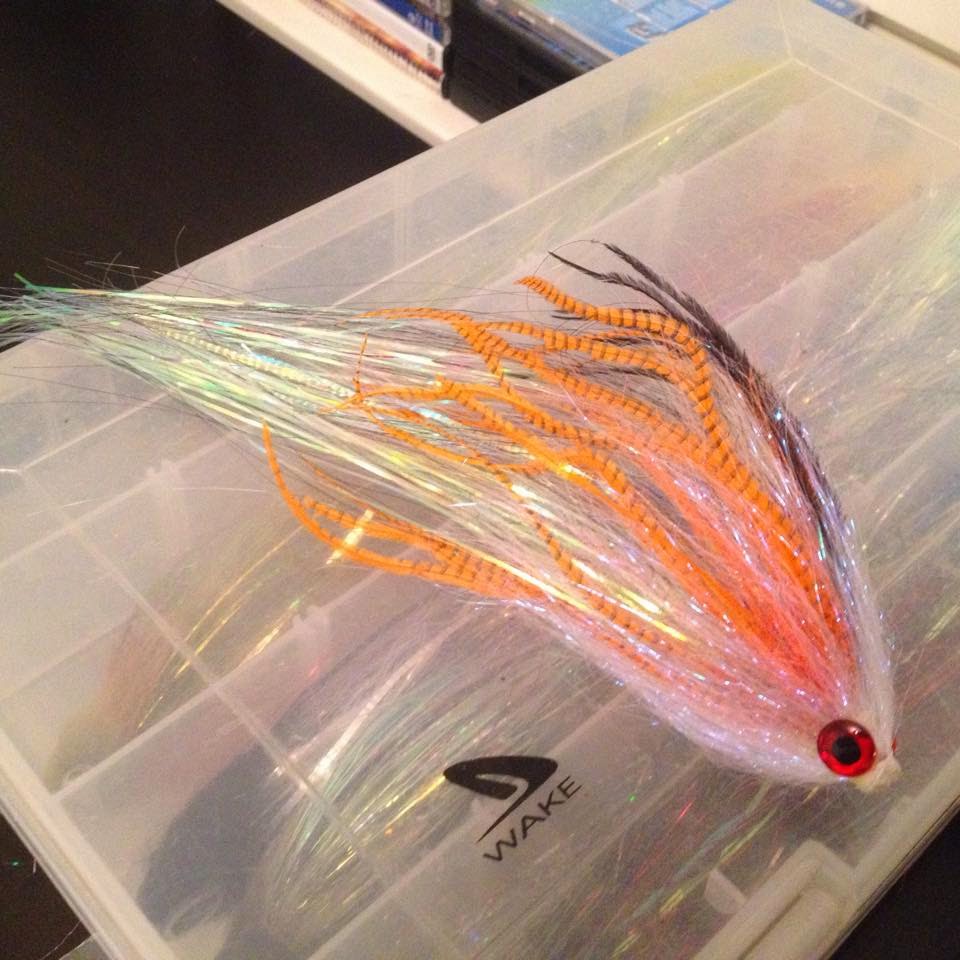 Once again a fly that turned out from my vise totally different that what it was meant to.
Believe it or not but it was meant to be a bream pattern when I took a seat behind the vise but it went wrong right from the start.
This one is tied in two parts,tail and head.

It started with some silver grey bucktail but instead of adding olive bucktail I added some Hedron magnum flash in mirage color so my idea of a breampattern was gone alreay.
couple of lateral scale strands in opal and tail part was ready-

After a cup of coffee I thought some orange Ostrich would look good,well found only these barred herls so thought they will do.Some black on top too,still don't know the idea why.....

As the head I had already tied same raspberry colored angelina fiber but before I added super glue I looked at it and thought no,no,no,no not good so it turned to be a white head of angelina fiber in blue pearl color,afterward I think black would have been best but....not this time
This fly has already some pikes landed so it haven't gone totally wrong anyhow. 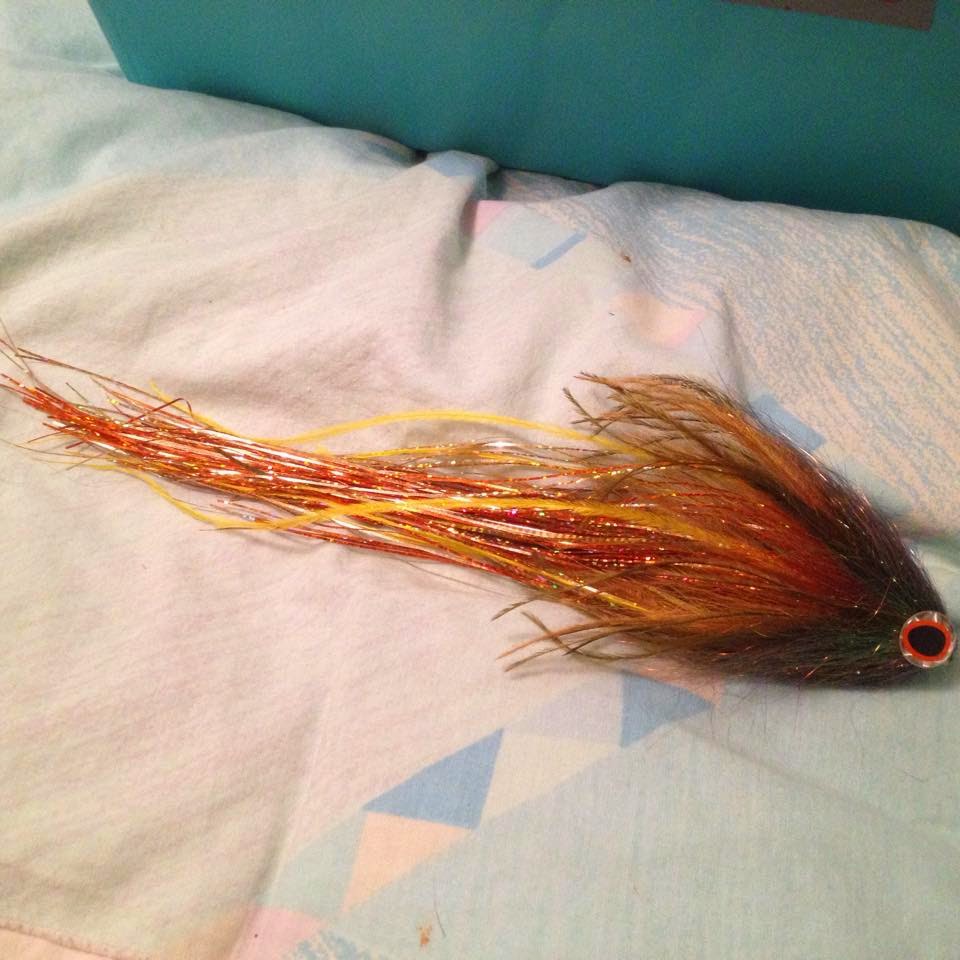 This pattern or any variant of it has been my absolutely all time favorite nowadays,many really nice fishes landed with it,
Of some reason I use to tie these flies BIG,usually +30 cm:s.
Even if it's big I use to tie them in three parts,tail,body and head.

Use to start with a mix of rootbear brown and bright yellow, followed by a mix of Magnum flash in copper,orange and pearl colors.to gte some contrast I added lateral scale in gold color.Often add some dryfly hackle feathers but on this I noticed that I had some awesome +35 cm ostrich herls in yellow color so I decided to use them instead.

Body part is simply built of a mix of bucktail in rootbear and dark olive colors,then added some copper and pearl flash and topped with ostrich herls in ginger and olive colors.

Trying to keep it simple with a head of Optic fibre in forrest blaze color.
Have to mention about these eyes here.They are 16 mm eyes from flydressing and suit fine imo on big flies like this. 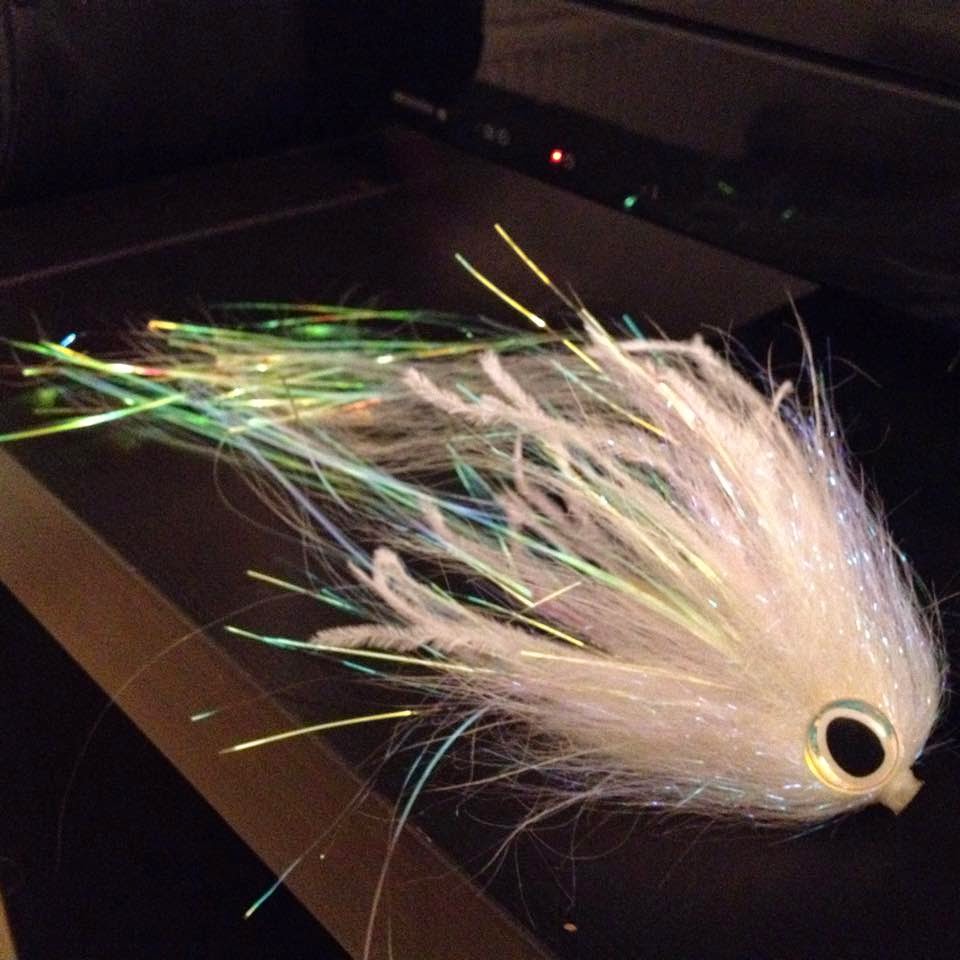 Don't know about you but I feel it very difficult to a fly using only one color,still I think that a clear white fly with just some small adds is one of the most best looking patterns.
This one is tied in medium size because it's meant for ice cold conditions and in my opinion a bit smaller flies works better then. 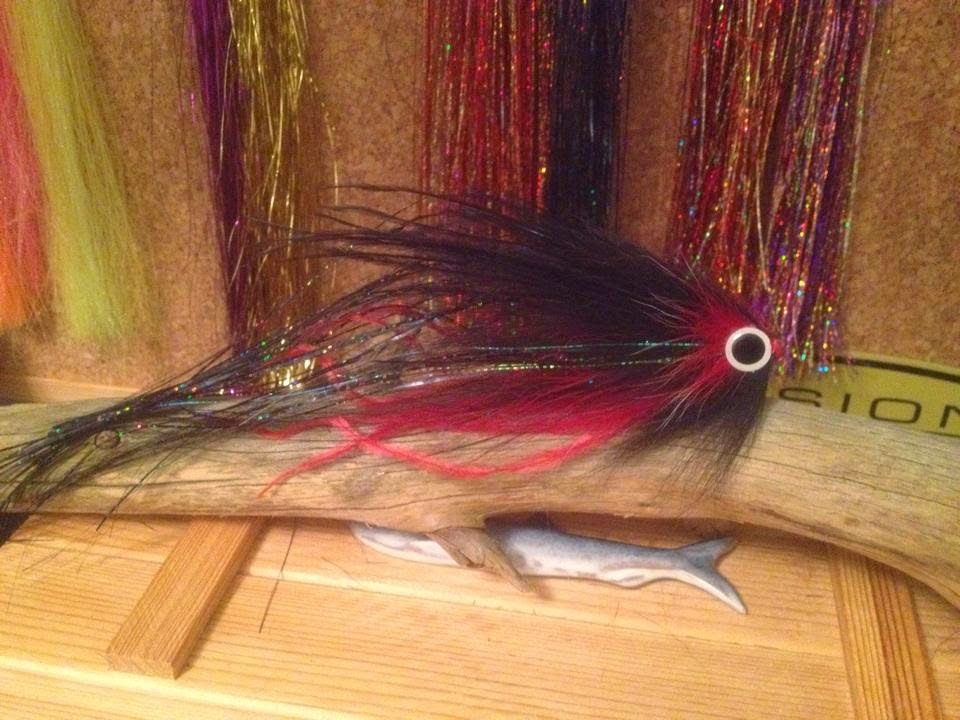 Hard to think there's a single angler who don't have a fly ore lure with this combo in their box.
For many years I lived up to my Dad's "truth", You cant catch a fish with a black'n'red in sunny weather....
I think that's the reason I started so lately to use this combo which has often saved my day from blanking,both rainy AND sunny days :)

Anyway,I have tied these colors in hundred different versions but this is my latest,nothing tricky here even if it's tied in three parts.
Before tail part I added something new here,Started with some Polar chenille in red before I got the tail part bucktail in black. 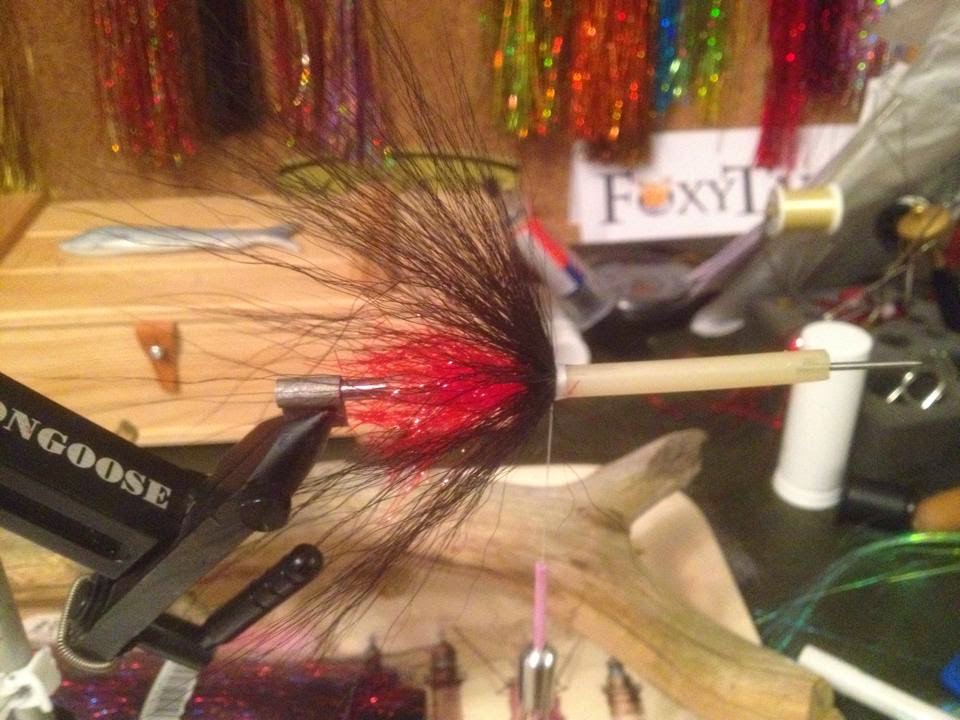 Then a mix of Hedron holo black and opal
As body I tied both black and red bucktail,black on top and red at the underside of the tube.
Black ostrich herls on top and red on the underside.
Find it hard to tie without flash so I added couple of mirage colored strands of crystal flash on both side of the fly.
Gave it a long thinking should the head be tied of optic fiber or something else and as you can see something else won this time.
I tied the head of Artic fox 3XL in a loop and just to get some contrast I added some red fox on both sides under the eyes.
This is a fly which have already a lot of landed fishes even if it's not an old tie.

So,here was some of my latest ties,will add more stories and photos as soon as I get more flies tied.
Lähettänyt Unknown klo 14.10