As I told you in my last post I had some high hopes about this weekend fishing.
Reason to that was the weather conditions forecasts had promised all week long.Hard wind from south/east,rain showers,cloudy,4-7 degrees and water level on the rise.I was excited.
I was actually so excited that I eat my brekfast in my car while driving to the shore and I arrived to the shore so early it still was pitch black and found my friend "Thebeis" already waiting for me,I wasn't the only one waiting for this session.
Luckily we had flashlights so we saw to load our kayaks and still we had to wait for about half an hour for the dawn with everything ready to hit the water.
It still was very dark when we started to paddle/pedal to the planned first spot,luckily there's not much boat traffic at this time of year,anyway I had a warning light which I use to put on when I hear a boat closing in.
Our main plan was to go to the furthest place and fish our way back to be in better control of the weather conditions and also to be able to get back in time with at least some daylight left but we could not resist to stand up on a place that has been so good for us several times.
Thebeis stopped first and I pedal couple of meters further and throw the anchor just when I saw him lay out his fly close to a reed bank,10 seconds after I did the same.
My fly just hit the water when I heard Thebeis said "fish on"...I made two slow strips and boom,I also had a fish on.
What a start to our day,felt superb even if I knew this would be a good day.
We fished on this spot and landed couple of fishes and decided to move on but not to our main target but to a place along the way were we use to only pass by because there's usually a boat or two already but it was "clean" at the moment so we decided to give it a go.
We landed a lot of fishes,dropped some too still only jacks,when I decided to make one last cast before lunch break I managed to catch a fish which was going to be my biggest of the day,not a big gun this either but man we had some time out there. 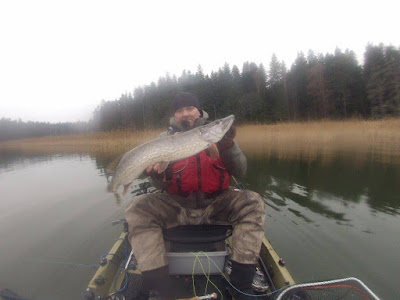 While we had something to eat we calculated we landed and dropped about 30 pikes already.
Even if forecasts promised it could be up to 10 degrees warm it felt very chilly because of the wind.
After an hour we decided to get to the bay that was our main target for the day. 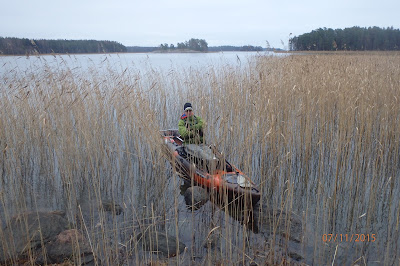 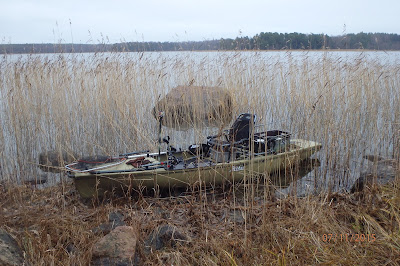 After ten minutes paddling/pedaling we went to the bay and started to fish,we got some but fishing wasn't as crazy as it was before lunch and also it was getting cold so we decided to start getting back but fish couple of spots on our way back.
There isn't much to tell about rest of the day.Thebeis landed a lot of fishes on our way back, 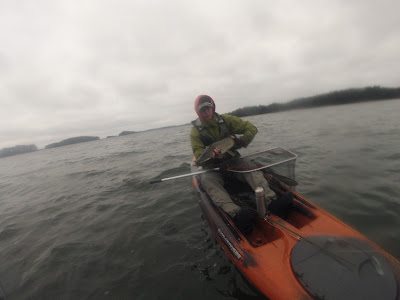 I think I had two more but overall we landed about 50 pikes so even if there wasn't any big ones we can say we had an awesome day out and really looking forward to next time.
Lähettänyt Unknown klo 18.42