This weekend I should have been in Sweden at JKFO but after many coincidences I found myself at home.

At least I was able to go out fishing with a good friend of mine which ease my pain and we had a good time on Saturday even if the fishing was a bit slow.
Don't know why but fishing from a yak is a lot of fun even on slow fishing days.
It can be pain in the ass too but we have noticed that taking breaks now and then can really make the days.
Decided that from now on I will really put some serious effort on the food too,so nice with some barbecue and good drinks out there instead of a chocolate bar and a bottle of water.

We were early out on Sat,morning in a pretty calm weather but we knew it was going to be a bit more windy later on,one concern was the sun which was not a part of our plans for todays fishing.
On our first spot we didn't manage to catch anything but on the second spot my friend had a good sized fish hooked for a while but unfortunately he dropped it just beside the yak.
I also had some bites before I managed to land a fish,a small jack.
Fished a lot of spots and one one of them I got fish two casts in a row but overall fishing was slow so we decided to take a lunch break,actually it was more than just a break,we had a break for almost one and a half hour which is much we got daylight only for a short limited time. 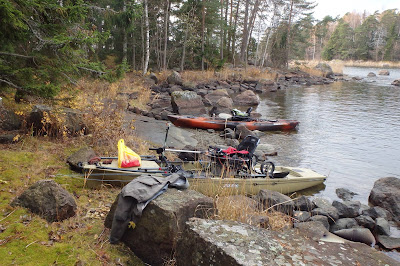 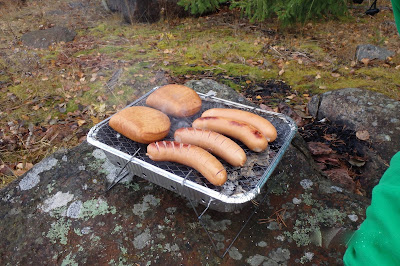 A good lunch break really doing good,stayin focused is a key factor on days like this with all those gentle takes,still we dropped a lot of fishes today.
At 3.30 pm we started to paddle/pedal our way back but fishing some spots and in the cloudy dusk I managed to land a fish which was slightly better size though not a monster size. 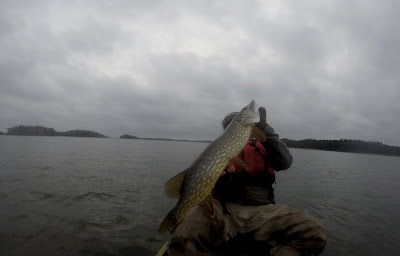 and one more fish from same spot... 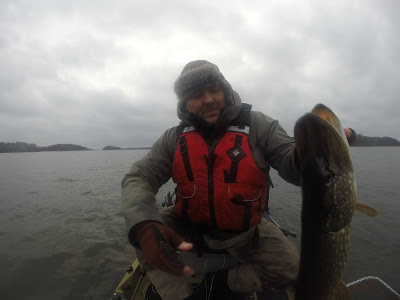 Darkness almost surprised us and just when we left car parking with cars loaded it was almost pitch black already.
Back home tired but happy.
Can't wait for next weekend when forecasts have promised good southwest wind with some showers and water level on rise.
Expectations sky high......
Lähettänyt Unknown klo 10.19