Long time since I been in such a good mood on a Monday while driving to work,had a awesome weekend.
Felt abit confused because I went fishing on Saturday instead of going to Spey Clave to the first day of this pike event but the need for it was so strong especially at this time of year when every trip can be your last before the long cold winter hit you and you facing a long,long waiting period fighting the rising depression mode watching fishing movies and photos from earlier seasons.

Well....I was fishing but we could sum it up like: "Fishing was so bad even liars didn't catch"
I didn't blank,only blanked two times this season but caught only couple of jacks and was freezing my fingers,my toes of me so....I have had better days too.

Sunday was booked for a fly tying course long time ago,and not just any course,it was guided by a guy who along with Simon Graham has had the biggest impact on my own tying,Niklaus Bauer who is known by probably every pike fly fisher in at least Europe
Think it's so nice that we finally got these kinda events in Finland too,for me it looks like fly fishing for pike is a rising trend.

We started with a bit easier tie,a tubefly which I had tied hundreds of but once again I learned some nice tricks which will help my tying in future.

After the first tie we had a lunch break and continued with a little bit more advanced fly,a "Black bream"

To be honest,I kidding with my friends before the course that hopefully we're not gonna tie a 30 cm fly with two hooks,a 6/0 and a 4/0 including a lot of beads and stuff,all because it looked very heavy to cast but guess what?.....exactly what was on the menu next.
I was very surprised of the weight when I had a model fly in my hands,could not believe that the fly was so light,sparingly dressed was the key factor to get this 30 cm fly feel like any normal tube fly.
Think I have mentioned about a place were all kind of big bream patterns work so well and think this will be a killer at that spot. 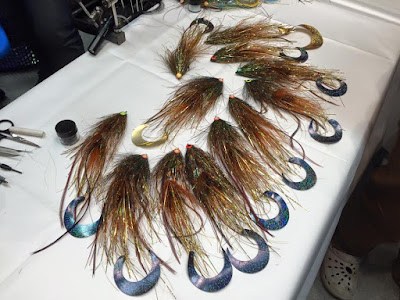 I really hope......almost insist that  https://www.youtube.com/channel/UCwTrHPEglCkDz54iSg9ss9Q should upload a instructional video of this fly,If someone of you readers know people from there could you please give them a tip.....