My first plan was to go to Hanko to catch some seatrout and to test out my new Vision Silver rod and same manufacturers Kust line but after series of coincidences I ended up to some familiar places to fish for pike,and also to test a new family member,Airflo 40+ Sniper line for cold water.
Was that late down at the shore I knew I would be able to fish for no more than a couple of hours.
Weather was nearly perfect,small wind,water level was high,cloudy and some rain showers now and then so I was pretty hopeful of some good moments.

My first spot was on a windy side of a islet only 20 meters from the shore.
I started with my new line also using a big Pink/White/Silver tie that worked very well in Kemiö last weekend. 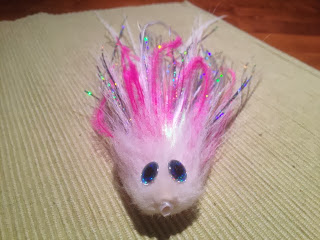 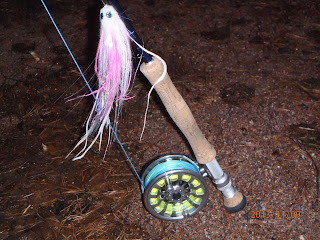 Fished for a while but I was really struggling to keep the fly under the surface.It has to be the line because I had no problems with otherwise the same setup before.
I tried for a time but was a bit annoyed because I wasn't able to stay many hours just testing gear,I also wanted to fish a bit.
After maybe thirty minutes I had enough,The line felt stiff,I knew I wasn't going to catch anything with a fly that acted like a dry fly so I decided to go for my reliable custom line built from a DH shooting head and also wanted to test my new or should I say latest tie I had inspired from my last trip to kemiö.
Believe it or not but I have started to tie synthetics again,and much smaller flies too, maybe 15-18 cm long. 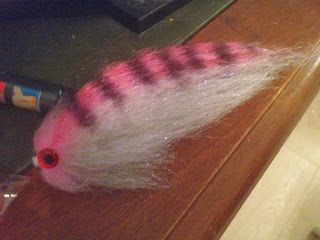 Pink should be the color because of the cold water.
It felt amazing how easily I grabbed five more meters with much less power with this setup and also pikes started to co-operate more now.landed some small buggers in a short time but decided to go to a bay not far away in a attempt to find something bigger.
Stopped on my way there every now and then and made some few casts,landed some fishes here too.
When I arrived to that small bay I was like WTF...Three boats were already there,no need for me to go in there anymore this day,wondering a short time what to do and because the clock was ticking I had no other choice than to start paddling back and fish the same places I just came from.
On my way back I of some reason thought of a bigger very shallow bay I don't use to fish too often and decided,hell,why not give it a try.
There was only max two ft water and in most part of the bay only one ft water which was crystal clear so I did not except anything from here.
But amazingly I grabbed fish after fish and even if they were small I really enjoyed my life here.
Was already on my way back when I saw a small hole in the reed wall and because it was a sheltered place I had my first cast perfectly placed into the bottom of that pot,sloooow retrieving,two second stop and BOOM...It was a powerful strike on that fly and at least a bit better fish on,after a couple of minutes I had the fish behind me and put it into my landing net and put my camera ready for one more in my opinion big fish photo. 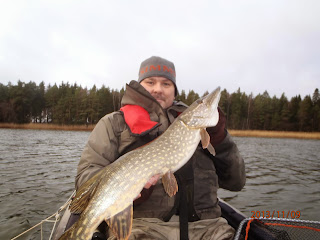 What a feeling to end my day like this,well,not quite.Made some casts now and then on my way back,with nothing to mention about.
At least I have to say that even if I'm not able to fish for pike anymore this year I will put my rods in store waitng for springtime with pretty good mood.