Finally I´ve managed to tie a fly in which I´m very happy with.This time I had a plan and decided to take ONLY the materials that I planned to use.
As i wroted yesterday I prefer natural materials instead of syntethics so most of this fly is tied with natural materials. 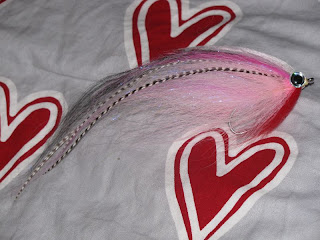 Almost have a bad conscience when I look at all those good looking flies on the other guys blogs,its just that I didnt had time to tie some flies due to the snowfalls in helsinki,at evenings I am so tired that I have often felt in sleep before 8.30 P.M.

Anyway,today I finally took a seat behind my vice and tied a fly,yes,only one.
Remember when Simon was to Espoo and held a lecture about flyfishing for pike,
he also gave us some usefull advices about fly-tying.

Today I was trying to follow one of his advice about blending materials,the aim is to smoothly change colours.
I started with white,then blended some yellow and white,then yellow with a dash of orange and finally some red colour on the top.
I´m not so happy with the result,could need some practice....
Think also the fly is way too bushy,but too late to complain now,cant help the feeling that the natural materials is in some strange way much easier to tie then syntethics or maybe its just need of practise,I dont know..... 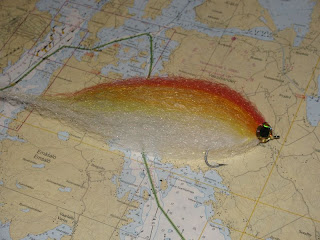 So,the X-mas is over,and at least I have eat a way too much of ham,turkey,carrot casserole and some different fishes ETC,ETC...
Santa brought to me a Navicons map card of of the eastern seashore to my navigator and all the same in paper way,and as a bonus a book of all the marinas from Helsinki to hamina so even if I planned to tie some flies today I have just lyed on the couch and study the map and the book and dreamed of some fishing trips to do after a couple of months,have even took some naps couple of times.

It feels so good just to relax and not doing anything,at least for now.
The forecast has promised a hell of a snowfall starting tonight and its expected to continue tomorrow the whole day so it might be better to get up steam before that.

Anyway,here´s a fly called Sofi Oksanen,if you dont know who she is so find her on Google and you propably know why I call this fly Sofi. 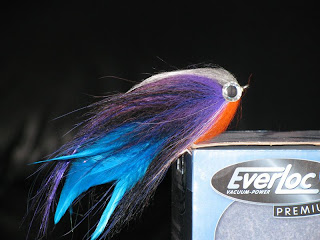 Merry christmas to all readers and followers. 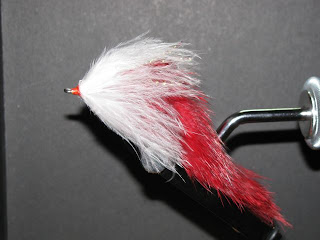 In Helsinki we have about 70cm snow now,very close to the record from 1970 ???
Thank god its getting colder..WTF !!!!
What am I saying,how can it be good with -15 degrees?
As the title says,this is a big dilemma,if its cold -->no snowfalls,but its also mean that the ice will not melt-->takes longer before any fishing
If it gets warmer -->more snow --> takes longer before I can go fishing,so what will be better?
Right now I´m physically so tired of snow plow from peoples backyards,balconys,ETC,ETC that I prefer cold weather for a while...BUT,not for too long.
Lähettänyt Unknown klo 19.18 Ei kommentteja:

As i told you earlier so I have been very busy at work due to the snow situation in Helsinki,but it´s beeing easier day by day(until the next snowfall)so first I was going to tie some flies.
I dont know has it ever happend to you but for me a couple of times.
My head is full of ideas BUT...when you take a seat behind the vice you dont have a glue what you suppose to do,should I do this or should I do that?Raccoon,slinky,sheep..everything just flingering in front of your eyes.
It also happend when I was going to airbrush my jerkbaits,it felt scary at the first times,now I´know what to do:I feel so stressed that I need to relax.
-15 degrees so no fishing,second step is to watch some movies.

It felt so good to lying on the couch and watch my favorite movies. 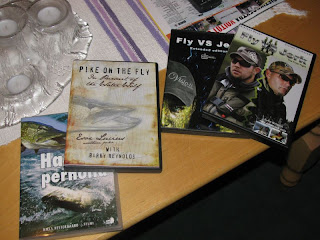 Oh god I waitin for the spring and the first trips now with my new boat,have watched some good looking places where I will be waiting for the pikes until the spawning time has gone(I will try not to disturb them at spawning).

I didn´t need more than one movie before I took a new seat behind the vice and created this one.
The hook is a TMC 911s 3/0
Tail:Lateral scale and ice ving(waiting for some noise from lateral scale when casting)
Collar:Chartereuse&orange raccoon strips twisted around the shank. 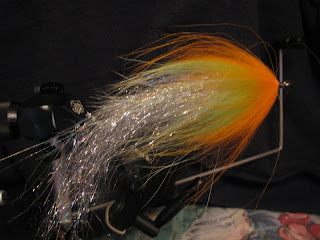 So....I think its time for the second movie and see if I find a new inspiration.
Lähettänyt Unknown klo 16.45 7 kommenttia:

I´m still remember 35-40 years ago fishing with my dad,ABU Atom 25-33 gr was the lure for the big ones,actually it was so big that I couldnt even use it with my Abumatic 220 and a 6 feet long glassfibre rod,I had to settle with Droppen and Relex spinners,and of course Toby spoons(the small sizes)and got some decent sized fishes anyway.

But sometimes when my dad let me try his ABU Cardinal 444 I always wanted to cast the biggest spoons he had,and even if I didn´t get any monsters I felt like the biggest fisherman in the world.

Well,now 35-40 years later I was here one day at the local shop "just to look around"
you probably allready now whats happend,yes,correct,I could need this,I could need that,I just have to buy it.
What i bought was 3 Storm kickin minnow wobblers.
10 inches long/150 grams.

I started to wonder what has happend under these years? I mean who would honestly anymore trust in a 4 inches long spoon if youre out for the big ones,even the pikeflies are about 8 inches long.

Hell,look at the difference between two lures for the big one. 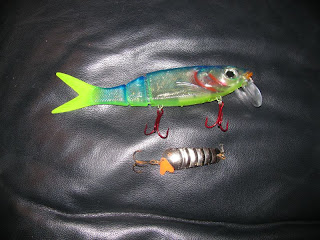 Why?Is it the salesmen out there tryin to convince you that you need bigger lures for big catches or what?
Every year someone shows a bigger lure then the year before.Is it necessary ???
I dont know,I really dont know...
But one thing i know for sure,both lures can catch fishes,even big ones.
Lähettänyt Unknown klo 11.48 2 kommenttia:

Have been so busy at work so I havent have time to write anything but today I have tied two flies.
The second one looks better in reality than in the photo,think I need some practise in photography.Anyway,the first one is tied on a Mustad 34011 hook,Bucktail to give volume and icelandic sheep(green and charteruse) on,3 microbarbs(finally)and a yellow collar of raccoon zonker. 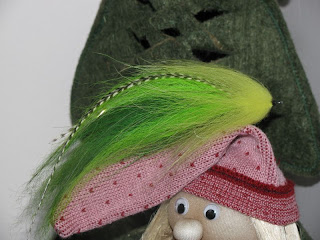 The second one is some kind of a streamer with a body of red polar chenille.The "wing" is made of brown raccoon and the collar of black raccoon zonker,
and its also tied on a Mustad hook.
Its a shame that it going to take several months before i can test them in front the real judges. 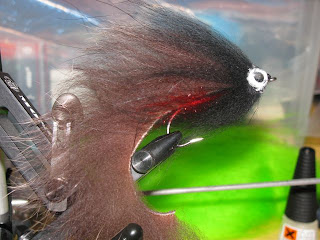 Both flies are about 18 cm long,the streamer got a epoxy head.
It felt very good to tie again after a while,a BIG thanks to Simon and Steefan for the inspiration.
Lähettänyt Unknown klo 21.03 2 kommenttia:

One thing that came into my mind because my friend at work is accused for a stupid thing.
He was dumping snow from a balcony at work.The balcony is above a door so he blocked the door from inside and outside with booms and signs,everything should have been right,but.....an older lady didn´t care about any warnings and went out from the door and got hit by a piece of ice,and now the insurance won´t pay anything because the warning signs wasn´t officially!!!COME ON!!!!.
Where the hell is a NORMAL HUMANS responsibility?If there is a sign saying DO NOT PASS,everyone should know its there for some reason.
Anyway,when I started to think about this case a little bit more it feels that society "trains" people to always find someone else to blame.

The question is:what can we fishermen(women)do?
One example is the seatrout,its exteamly endangered and when you read the forums (in Finland)the conversation is all about net-fishing robbery,the professional fishing,
in that country they dont care about anything,Why doesn´t somebody plant more fish, ETC;ETC...seems that everyone just accuse each other,instead of that we should all take responsibility for what we are doing.

There is still plenty of pikes in our water but for how long if we don´t take care of our waters,take our OWN responsibility instead of waiting for someone else to do something.
By releasing the bigger ones,using barbless hooks,have the right tools to quikly off-hook the fish and keep them at hand so they are ready when its time to use them,not in the bag.
By some small actions we can at least carry our own responsibility to a bigger ensamble.

Even if it´s not time to new years promises i´ll tell you mine:I use to follow those "rules" above and + that I promise to stop using a landing net no matter the size of the fish.

This story was just a thought of MY OWN and was not mentioned to get anybody pissed off,I´m not judging anyone.

And something totally different,also tied a fly after I watched the second movie.
I used a Mustad 34011 3/0 hook.
To the tail I used big fly fibre+2 pieces of rabbit zonkker,lateral scale.
And to the collar yellow,orange and red raccoon zonker,all twisted on the shank. 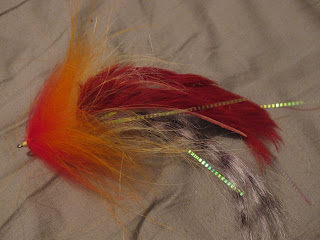