Made a small video of my last fishing session. 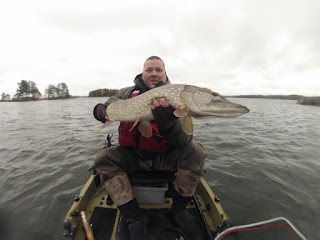 Even if I have caught some fishes now and then fishing overall has been a bit slow to be honest,one to blame is of course exploring new venues but second is the weather which hasn't co-operate often.
Water level pumping up and down or stay at -40 cm including northern winds has been a real pain in the ass.
No wonder why I was in good mood while driving to a well known dock in eastern parts of Finland when just read forecasts,wind from south 6-8 m/s,cloudy,drizzle and water level on the rise,weather conditions was nearly perfect.
I was out pretty early because it's getting dark pretty early and I wanted to be back at the dock before 4 pm.
Made a plan of spots to fish and took only one rod with a intermediate line and only one box with flies because I wanted to get out quickly because I really had a good feeling.

At my SECOND !!!!! spot ( coming back to my first spot later) I changed my fly from traditional black'n'red to my latest parrot pattern an not many casts before I managed once again first a slight hit,then a more aggressive take and a good fish came to say hello. 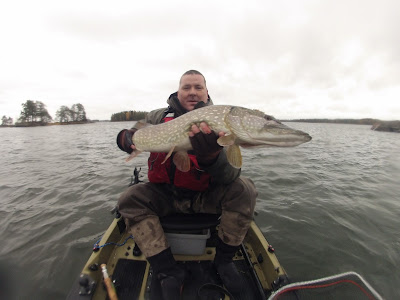 What a day this seem to turn out to.
Not long before next Ma'm knocked on my fly and this was a pretty hard fight and just when I get her in my landing net the hook came off. 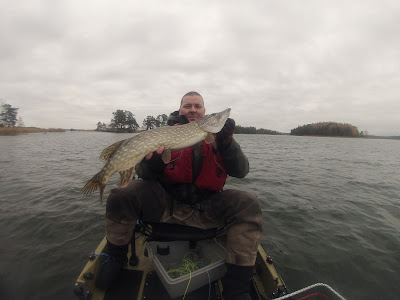 Landed a couple small jacks on this area too.Decided to take a lunch break in form of a sandwich and a soft drink.
Always good to take some breaks,even short ones makes you more focused.
Moved on to a new spot and landed some jacks,moved along a reed bank until I came to a spot which has always delivered some pikes,so even today. 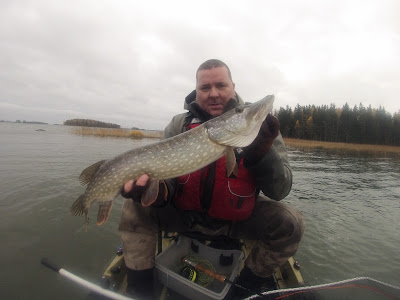 Also saw a wondrous thing,a big dead pike,died when it had tried to swallow another pike which tail fin was bigger than my hand. 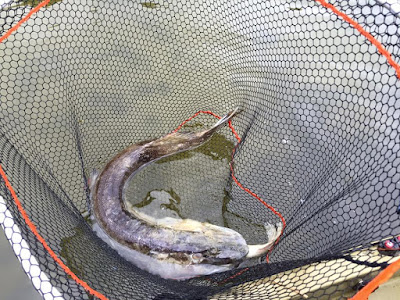 Thought I could have take better photos of it but the smell was awful so this was the best I could do.
Never seen anything like that before.

Anyway,this time of year twilight comes early so I had to start my trip back to the dock before it's going to get dark.
Also good to stop fishing when you are on good mood so....
Almost forgot,the first spot.Wanted to save the best part to last.

Often first spot gives a pike or two.Gliding slowly in to a bay which include a lot of reeds too.
only couple of casts when I felt that my fly was snagged in some reed...but hey....this is not reed,so light take and then the hell broke loose,knew immediately this was a better one,had thousands of thoughts in my head when I saw this fish,earlier this morning spoke to a friend and he said that I was going to catch a pig,this was definitely one.Remember that On same place i dropped a good one a while ago,this fish was very strong and I can't tell you how relieved I was when she slided into my landing net,pheeeeew,a season best for sure,maybe even a PB.
The wind was so heavy I decided not to scale this beauty,because I would have to stand up in my yak,and going to land was out of question so I only measured it.
112 cm and a high double earned a season best title,beautiful fish imo. 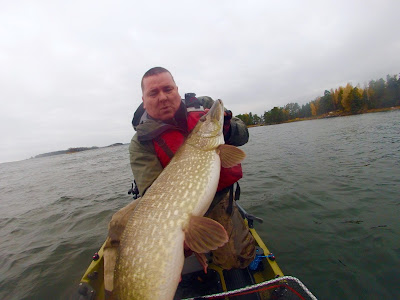 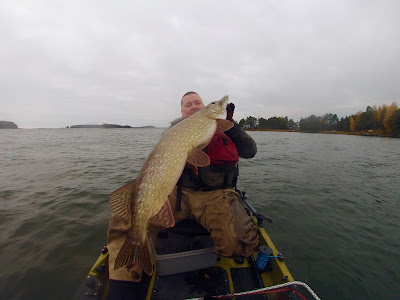 Hopefully the weather would stay like this for a while,collecting memories like this help me survive our long cold winter.
Lähettänyt Unknown klo 21.24 Ei kommentteja:

Well,some years have passed since I started with fly fishing for pike and everything involved in this beautiful sport has become more and more advanced.
Different type of rods,reels,lines,hooks etc,etc have appeared on market,even flies have came in progress with wiggle tails and other exciting stuff.

About rods,I have found what type of rods I like to use,same thing with lines.
Reels are less important for me as long as it got a decent drag and take a nine weight line.

I also feel comfortable with different kind of hooks,it depend on what kind of flies I'm tying.
One thing that I really struggling with to decide what to use is the beloved trace wire material.
When I started with fly fishing Fortress Predator was a wire used by many,it got some fans even these days. 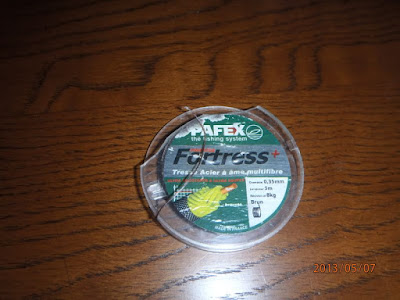 I used it too but it use to get kink after so few fishes I decided to try to find some other brand and after some study I found a brand called Optima kevlar.
First feelings was pretty good about it,easy to knot,soft texture.Actually I thought that a trace wire could not get any better than this. 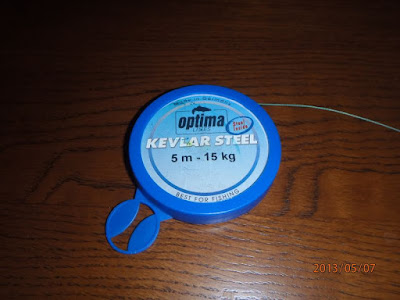 All those features were good but durability was bad....very bad,you had to check the wire very carefully after every fish and after couple of fishes it use to look like this,sometimes even after only one fish.Not good..... 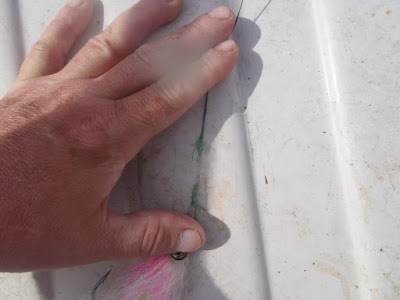 Tried with little bit of this,little bit of that before I got my hands on Sakuma plastic coated steelwire,my first wire to weld.
At the moment I got so many different brands at home I  can't even remember all of them but my favourite wire at the moment is AFW Bleeding wire which I have many good experiences with so far.
Partridge pike tech wire isn't bad either but.....I don't know,value for the money isn't quite in line here imo. 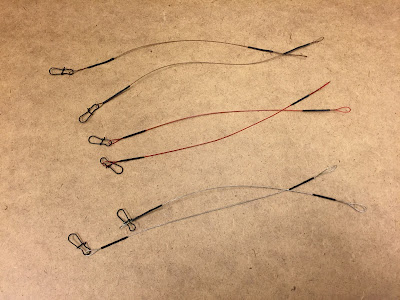 Use to take some different brands with me on every trip just to compare.
But as I said,AFW bleeding wire is my favourite at the moment but I'm still wander in the jungle looking for perfection. 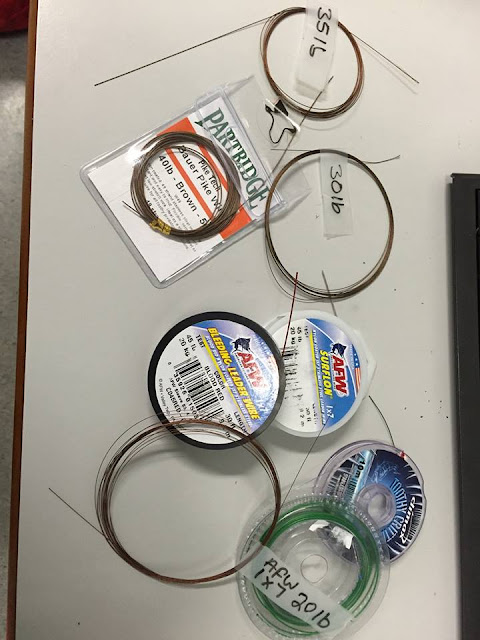 Made a short video clip from my Trip two weeks ago 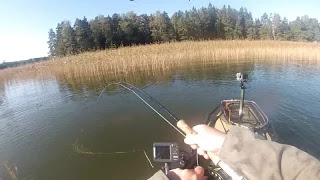