Merry Christmas to all of you

Season is over and I have made a video of some nice moments from 2014.
It's going to be kayak customizing and fly tying for a couple of months now.
I want to thank you all for following this blog and wish you a merry Christmas and a happy new year with deeply bended rods and screaming reels in 2015 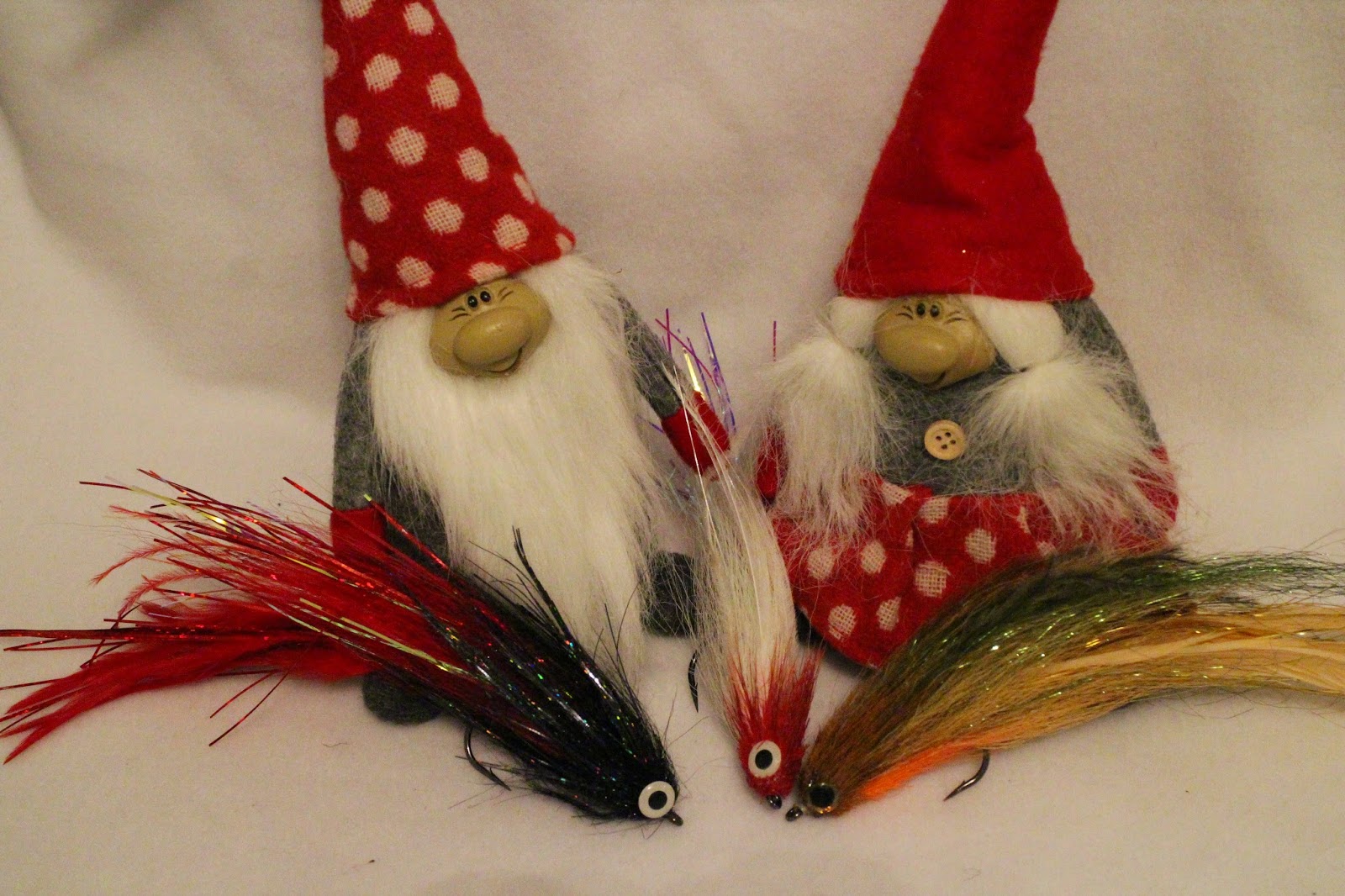 Actually should be grateful for opportunity to at least get out fishing but due the shitty weather at least I would like to get some results in form of nice pikes for all the early wakeups and freezing my fingers and feet but...you know...just one of these weekends again.

We have had some very strong winds here lately,so also on Saturday morning when I woke up.
Wind from south +12 m/s and 17 m/s in gusts including a heavy snowfall wasn't exactly something to raise my mood 5.00 am and have to admit that staying in bed felt very tempting but after some coffee and sandwiches  it was time to jump in my car and go out for a pike hunt again. 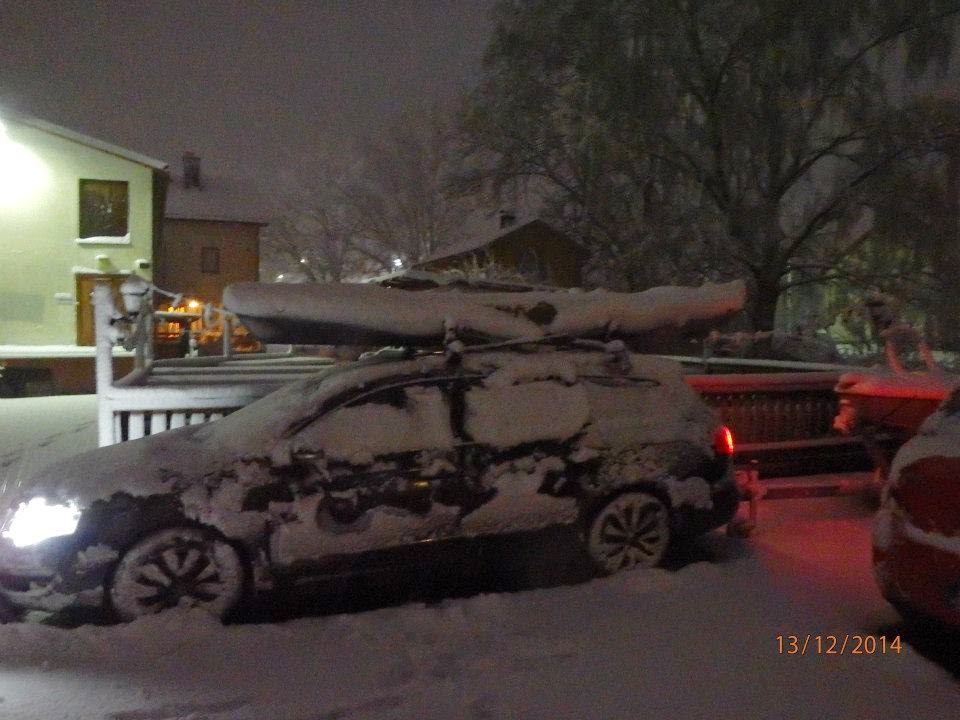 Due to the shitty weather and slippery roads it took me a while to drive to my planned destination and also took some time to empty my battleship from snow but after some struggling I was out paddling against the wind thinking how lucky I am to be able to go back with a tailwind.

Strong wind forced me to fish only on some calm places where I was able to paddle to so Instead of fishing a lot of spots I decided to fish few places more carefully then to paddle around for more spots.
Spent about seven hours out at the sea and when I started to loose sense in my fingertips and toes I decided to stop fishing with less than ten jacks landed,Tough day. 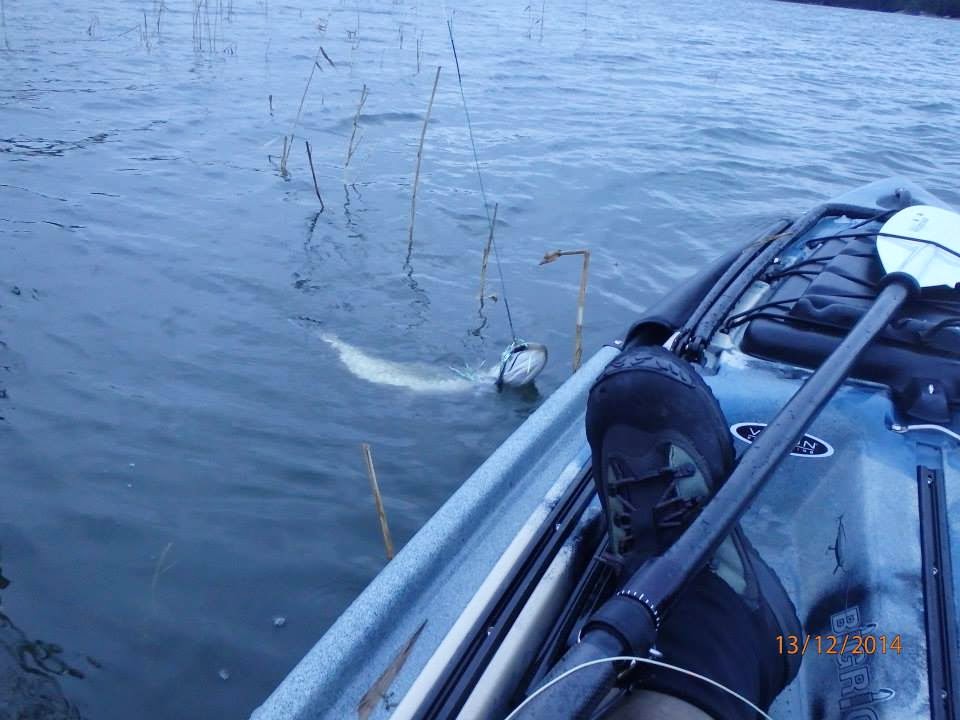 Next day I went out with a friend and the weather had made a U-turn,it was calm but cold,-3 degrees to be exact.
Water level had dropped about 30 cm from yesterday,Cloudy but no worry for rain. 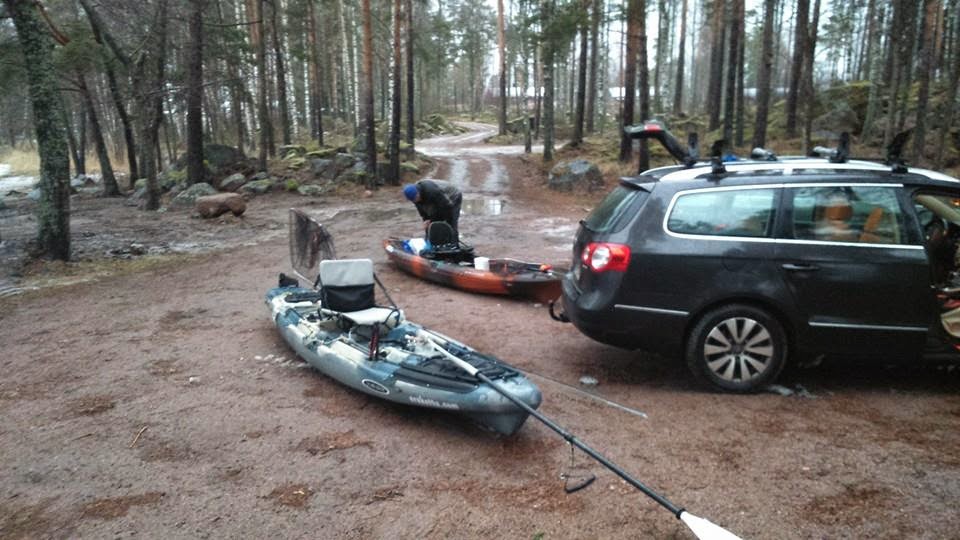 Even if the weather conditions were better today we were a bit late out so we decided to fish just some nearer spots because days are so short this time of year,pitch black at 4 pm already.
Not much to tell you about from this day I'm afraid.
Six hours saldo was frozen fingers and toes which should not surprise you.
One !!! landed jack,three dropped and a big mama following the fly for a long time but not accepted it.
My friends day was even more miserable,no action at all but a broken rod.

Well....I always try to see some positives in weekends like this or at least learn something and I have learned something from this weekend:Blanking or landing just small or few fishes is far more funnier from a yak then a boat but if the weather is cold or shitty in any way it doesn't matter if I fish from a moonraker,I want fishes or at least action.
Lähettänyt Unknown klo 12.01 Ei kommentteja:

Funny how quickly things can change.In this case I'm talking about the weather,two weeks ago we had temps low as -8 degrees and since then it has bee all from + 2 to +5 degrees which has forced me to think that the season is far from over again.
Had already give up hope of more fishing this year and stored my Big Rig for the winter but looking at next weekend forecast with temps up to +5 degrees and raising water level made me  take some steps backward for more fishing  and also long terms forecasts has promised some warm weather at least until Christmas so I feel pretty happy at the moment,winds might be an issue but we'll have to wait and see.

As I told you I had already stored my yak for the winter and immediately after washing and cleaning I started to outfit it a bit with echo sounder and some smaller  things like decals for example,also some work with the anchor trolley will be done. 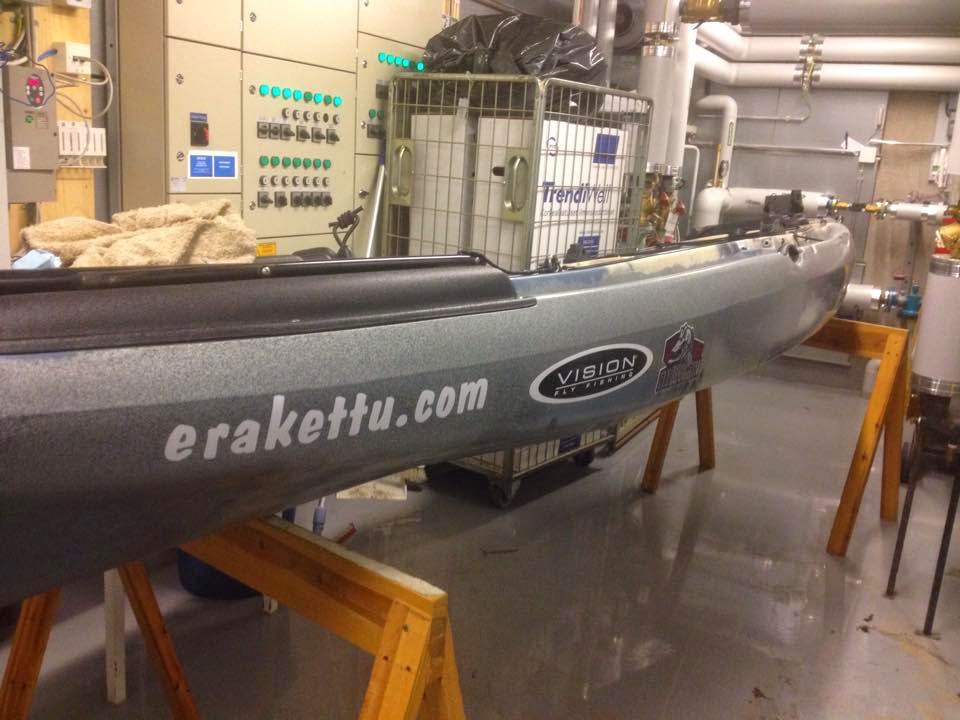 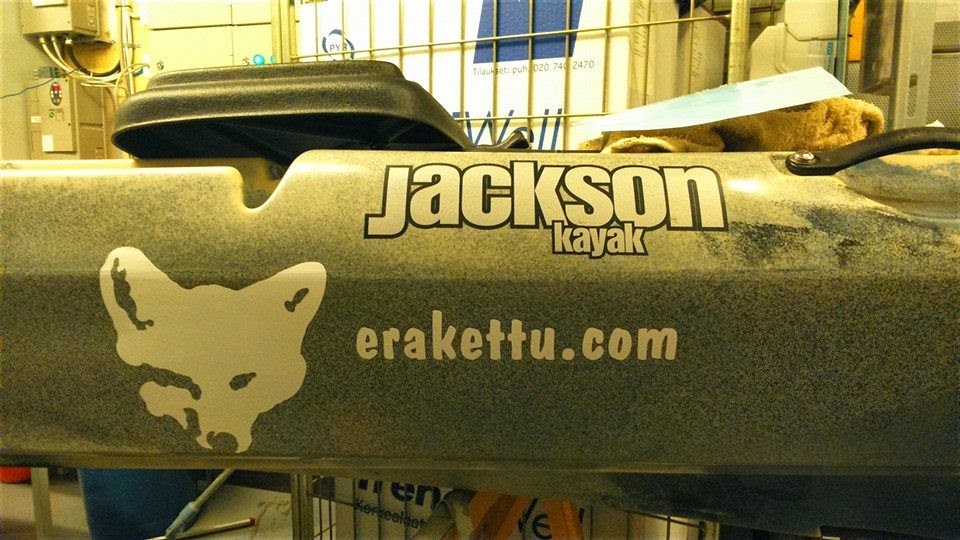 I'm working on a solution for my transducer,got a Garmin echo sonar but the transducer kit for the drain hole is made for Lowrance so some small changes has to be done before mounting.
But at the moment is all preparing for some weekend fishing.
Lähettänyt Unknown klo 8.33 Ei kommentteja:

Watching the weather I can't help the feeling that 2014 season is coming to an end.
That weekend was cold and snowy.On Saturday forecasts promised 1-2 m/s wind from NW but the truth was close to 10 m/s and NE.
That wind combined to some snowfall made it kinda extreme conditions for fishing but even if the water level was LOW (-45 cm) the fishes were still feeding which was a small surprise for me.
Had in mind do just some quick trip due to the weather but you know,need for fishing win over common sense so no wonder that I barely felt my legs and fingers when I came back to shore at twilight time.
Seven hours in that weather was tough but memories of ten-fifteen landed pikes warmed my soul a bit while driving home and a warm sauna and a Irish coffee was the right cure for fingertips and feet.

Later on sitting in my sofa in some kind of trans I woke up to the reality in form of a phone call from my kayaking friend asking me to come out on Sunday for a short trip,took me a long time (2 sec) to say yes and here we go again.

We went out pretty early next morning which this time was cold and totally calm and water level still low so once again my expectations wasn't too high.
-3 degrees and wet waders and gloves.....took also my mood down below zero but started soon to feel better and just minutes after that when I landed my first for the day I forgot my aching muscles and wet clothes.
Just as I thought Sunday was far more worse than Saturday,I landed four and dropped at least five,maybe six fishes.
And yes,had no sense in my fingers and toes at all when we arrived to the dock six hours later,
Still have to go out every time you can because two-three months forced rest isn't too far away when my worst nightmare comes in form of a ice blanket.
Gonna end this post with some photos and a short video clip I made and keep my fingers crossed I'm able to go out soon again. 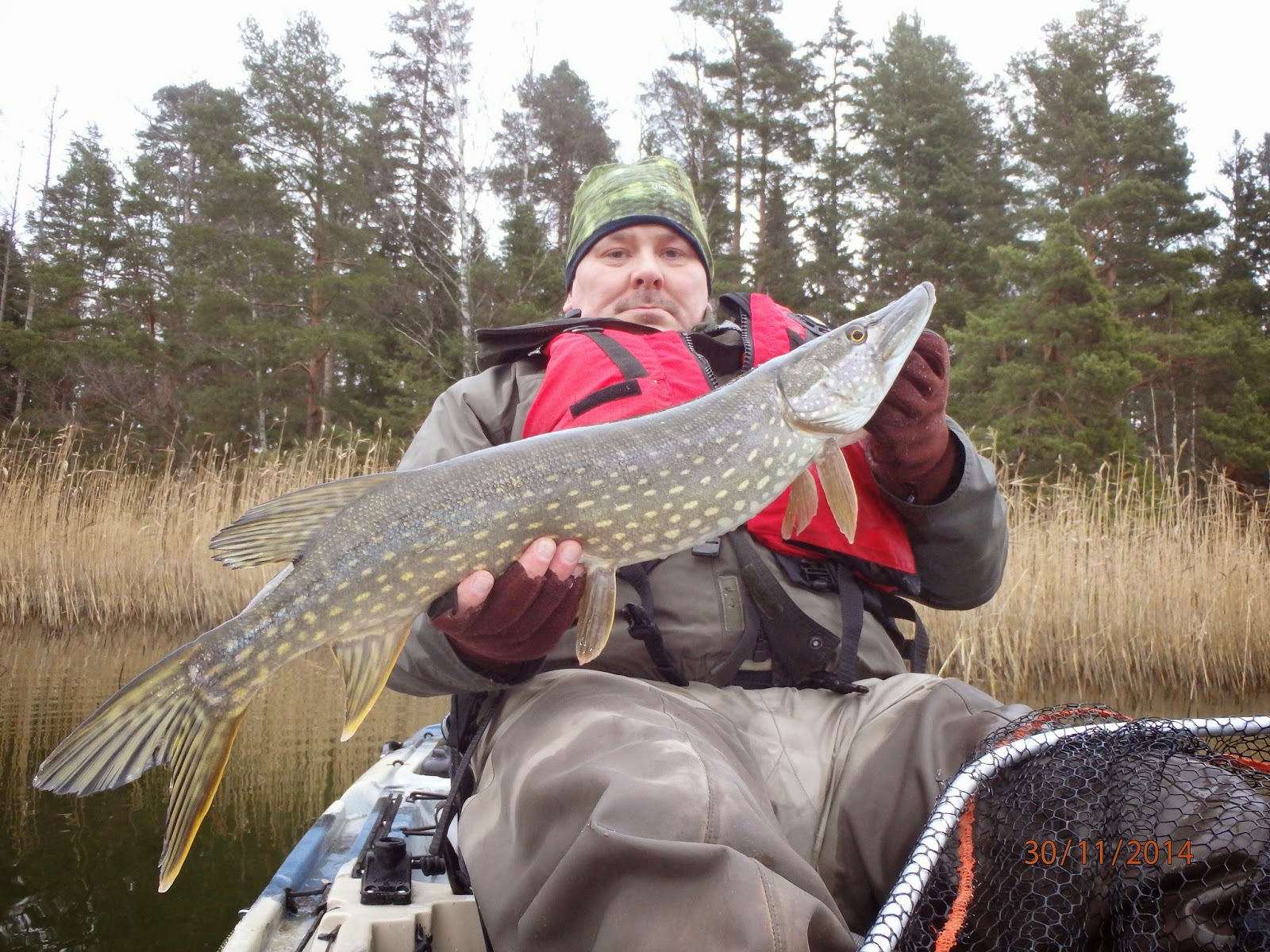 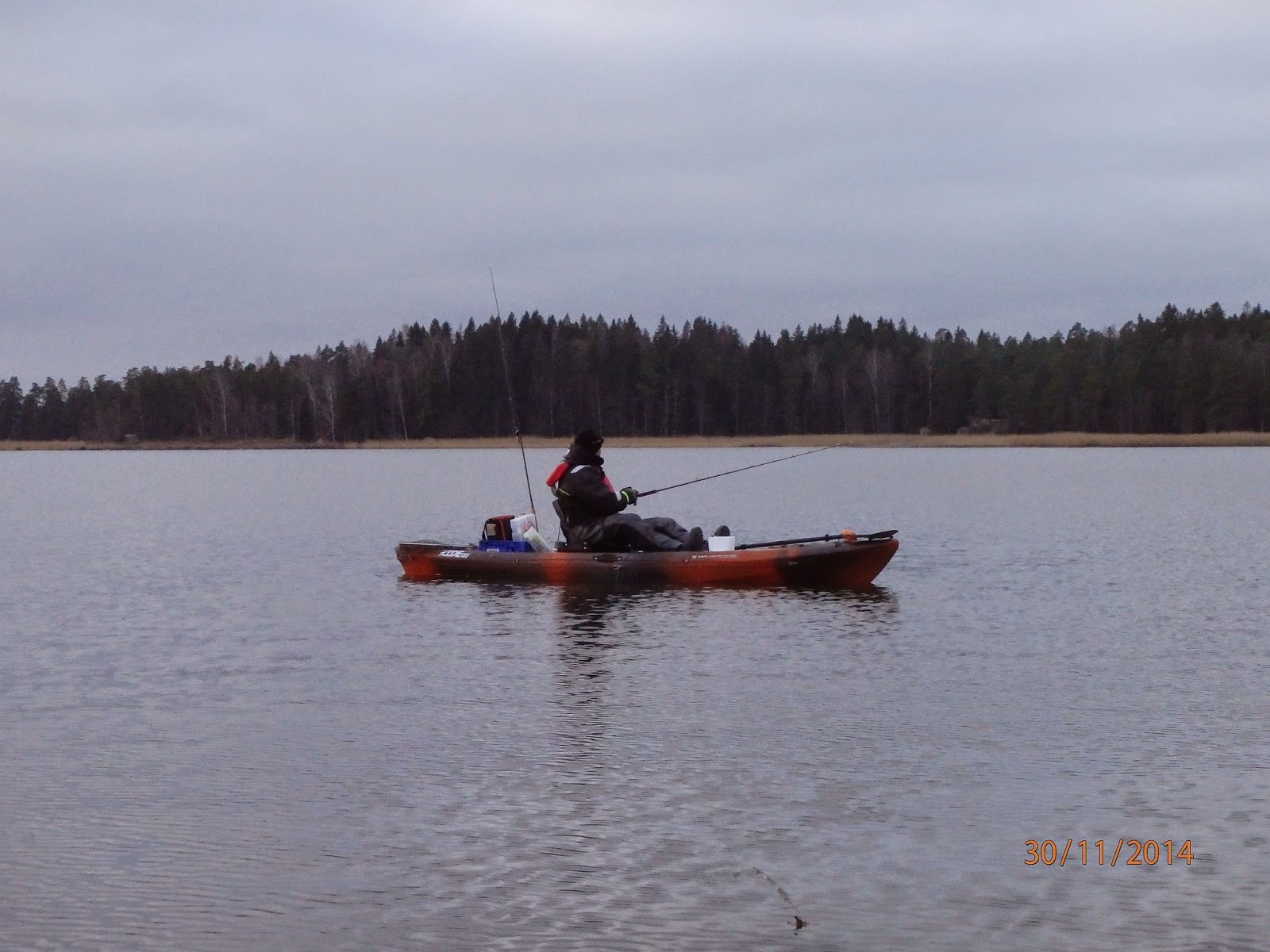 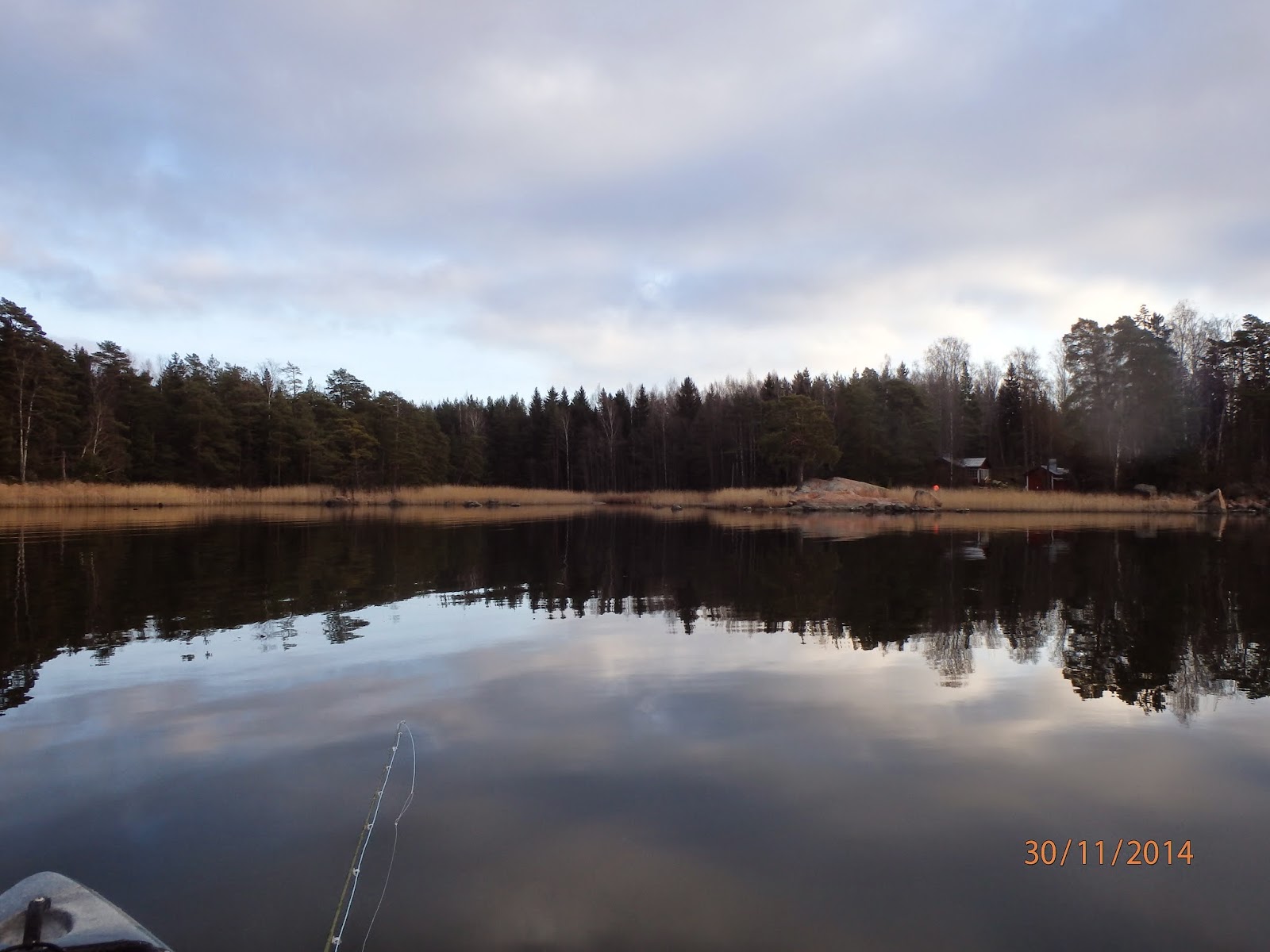 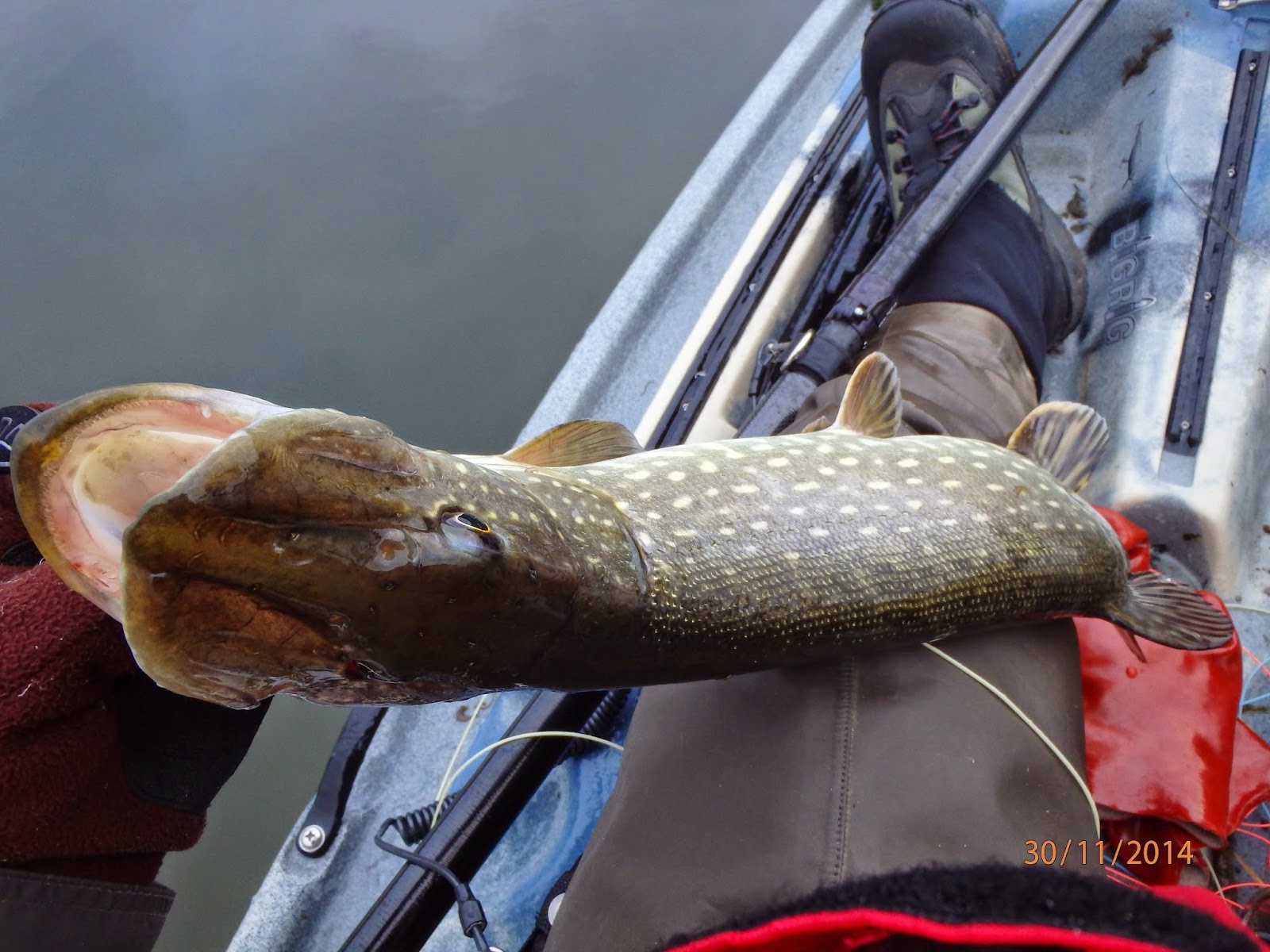 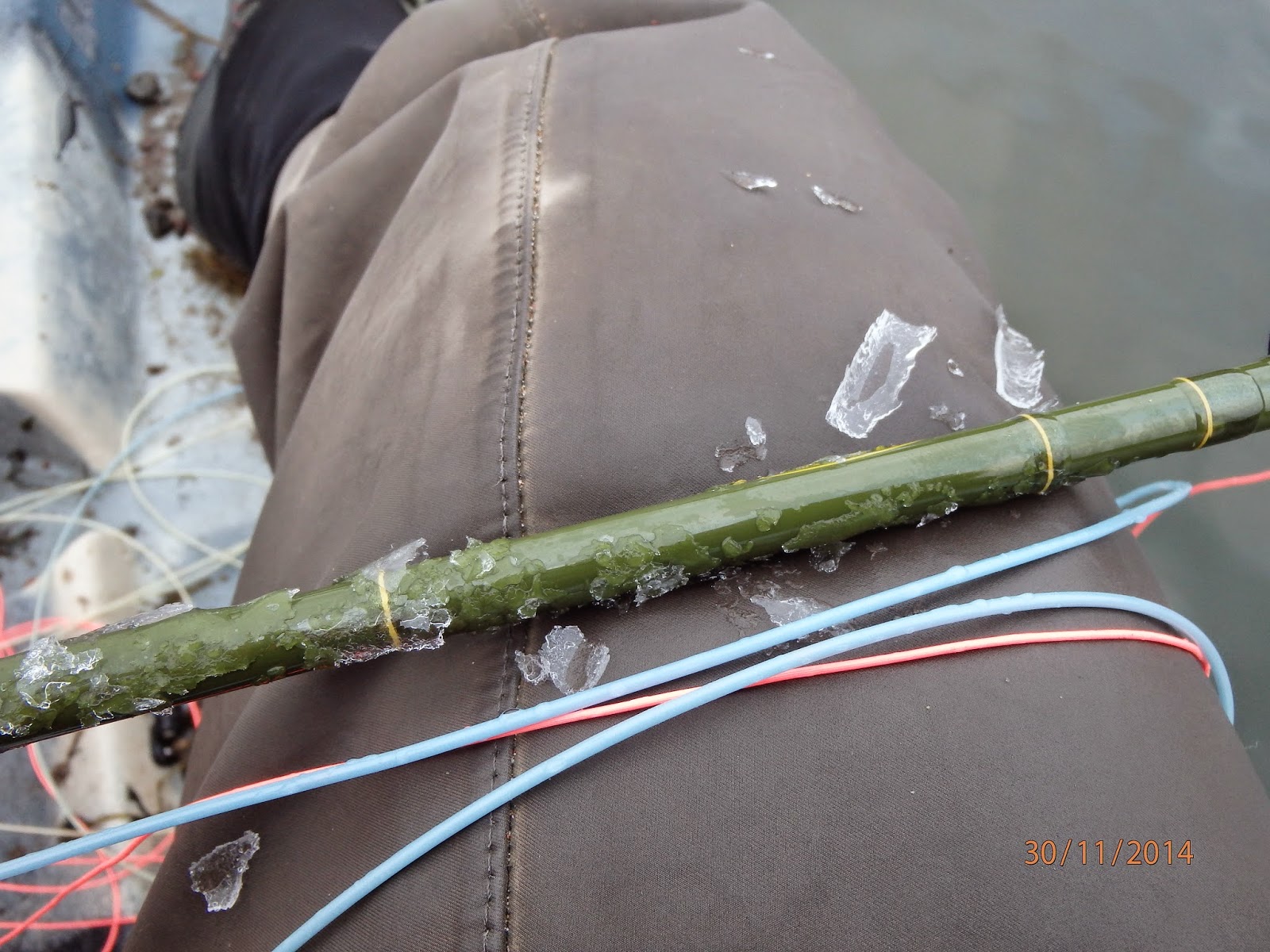 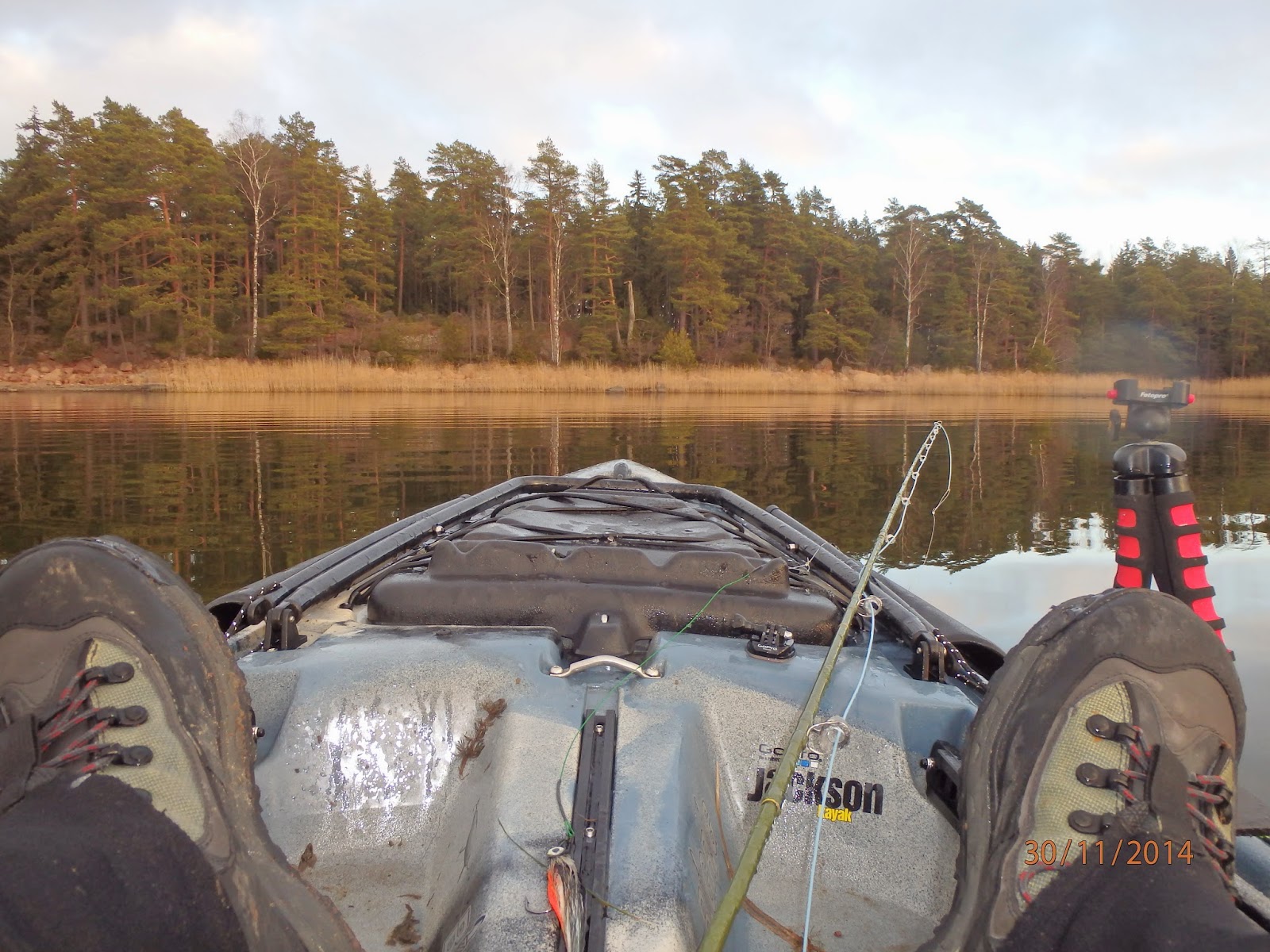 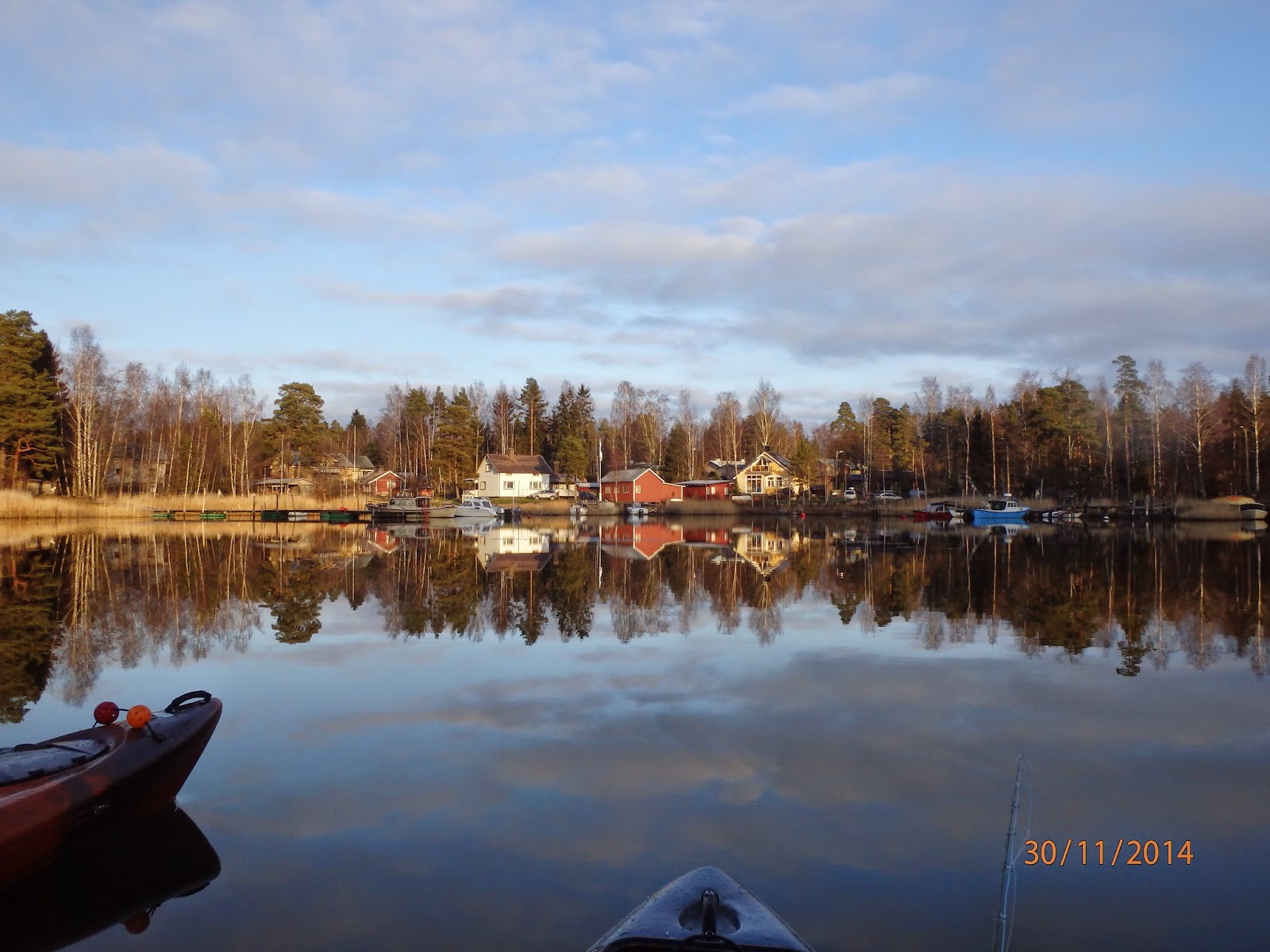 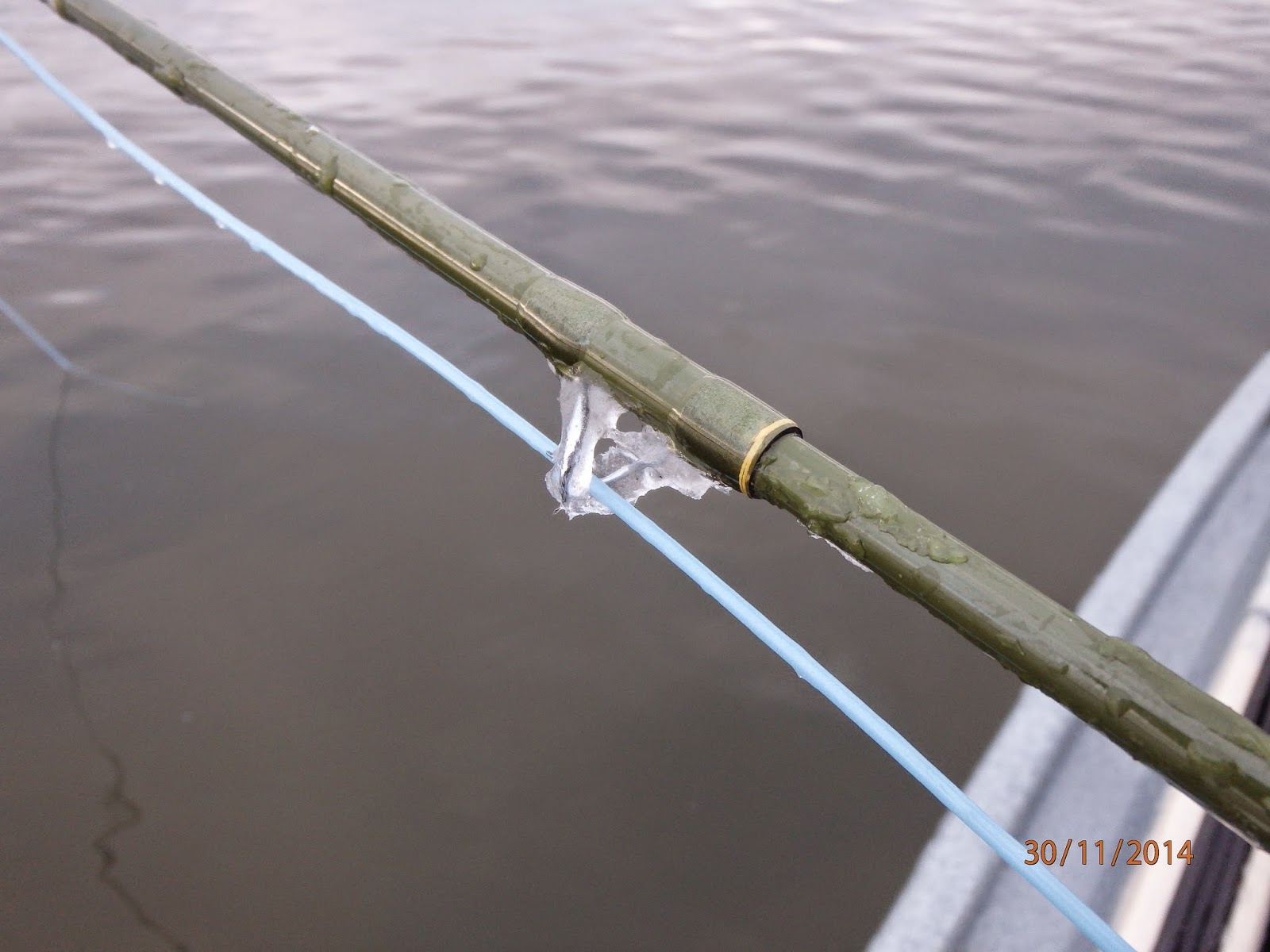 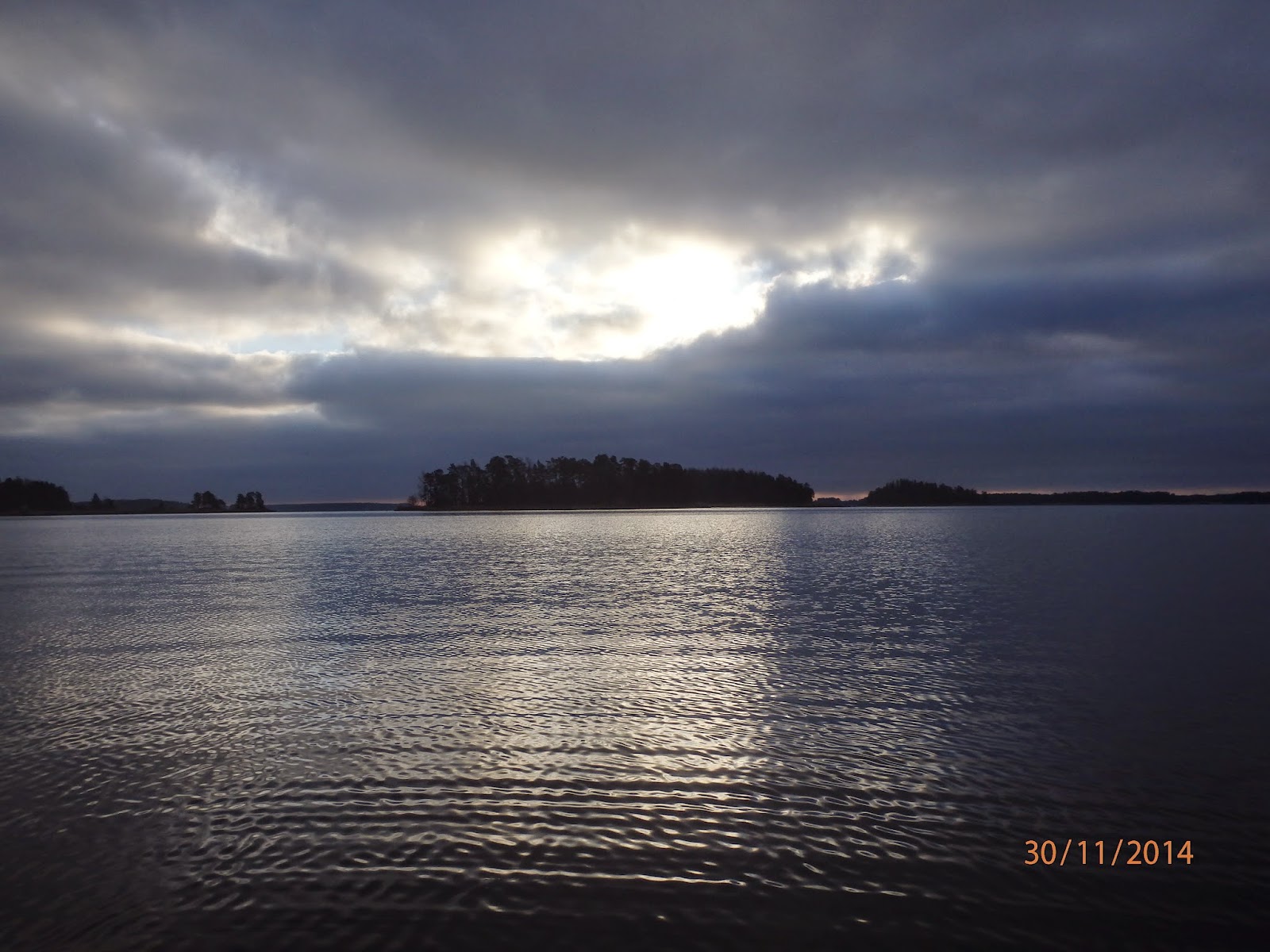 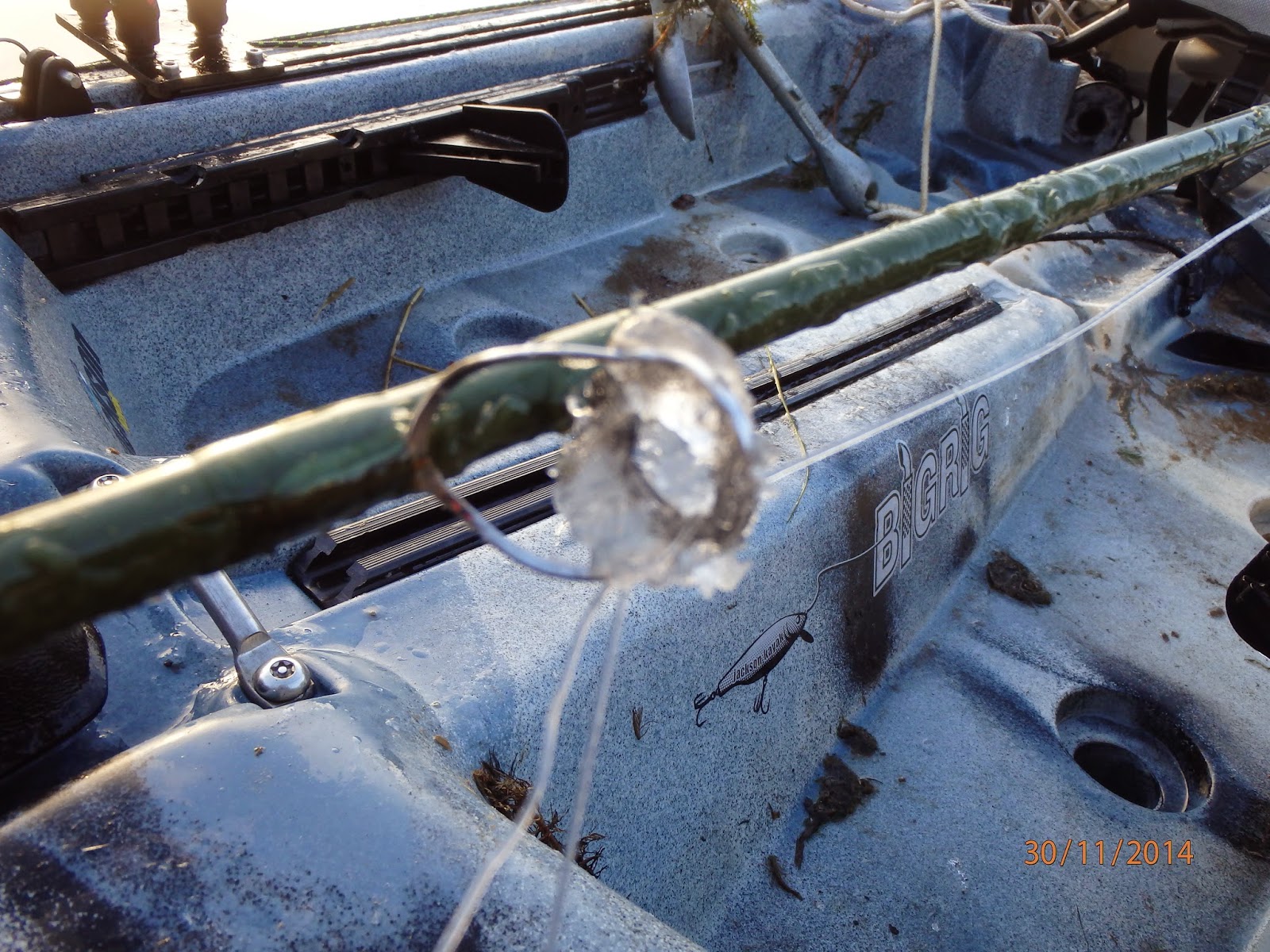